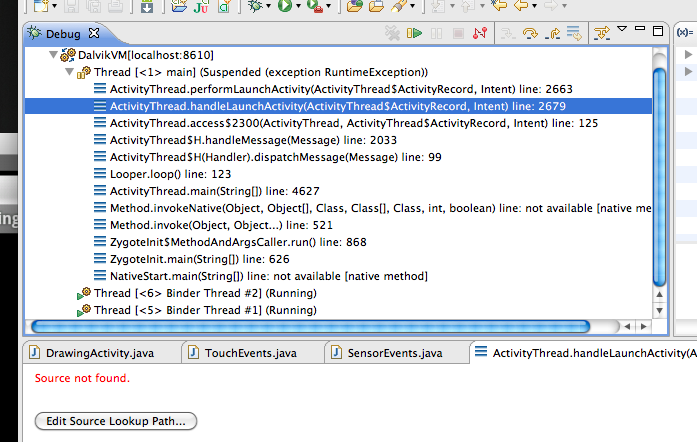 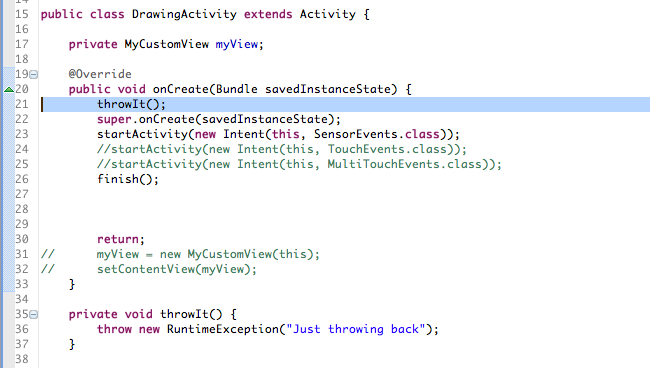 The issue is that you haven't let the stack trace "unroll" out enough yet. When the exception is thrown, you have to keep stepping through until you see the exception appearing within LogCat (which you should be able to see in the default Debug View).

For example, here is my code:

When the exception is finally thrown all the way up the stack, I will finally see this within my LogCat window:

If you look here, you can see at the top of the stack trace, the thrown exception. However, this doesn't tell you a whole lot (except what happened). Towards the bottom of the LogCat window, you can see what the actual cause was from (which you'll see once the entire exception unrolls). In this particular case, it occurred in my HelloAndroid.onCreate() method (which I have selected). When you double-click on this line, you will be taken to your code and where the exception actually occurred.

I've never used debug mode but I use the LogCat View. You activate it in

If an exception is thrown, the log show it in red. In my experience, the real problem never appear at the beginning of the exception, it appears after the line

There you will see in which line in your code the exception was generated and be able to go there by simply double clicking it.

Debug stacktrace mode does not show it. Logcat may.

2
How do I know what the exception is in Eclipse, Android SDK?

4274
How to close/hide the Android soft keyboard programmatically?
3132
How to stop EditText from gaining focus when an activity starts in Android?
1301
'Must Override a Superclass Method' Errors after importing a project into Eclipse
1982
"Debug certificate expired" error in Eclipse Android plugins
3038
Is there a unique Android device ID?
2228
What is 'Context' on Android?
1030
Can't start Eclipse - Java was started but returned exit code=13
1258
Reference - What does this error mean in PHP?
3959
Proper use cases for Android UserManager.isUserAGoat()?