IIS 7.5 with process idenity set to user has wrong USERPROFILE

First of all, this is my third question on the similar topic.. and still I have no answer, maybe only approaching it (see first, second).

My web application (ASP.NET MVC3 under IIS 7.5) runs git to access some github repositories. After I upgraded my workstation to Windows SP1 it stopped to work. The reason was that as soon as git started, it actually runs ssh.exe to communicate with github. The ssh.exe appears to hangs up, so all application hangs.

The application pool used by that application use the same process identity as myself. But using ProcessHacker I can see following picture: 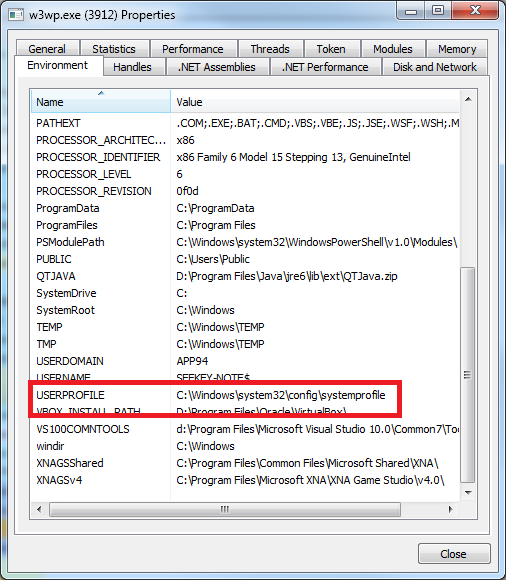 Because of USERPROFILE is pointed to /system32/config/systemprofile ssh.exe is expecting to have .ssh folder, that contains public/private keys. Since keys are not there it hangs.

But keys are typically in ~/.ssh (in my case c:\users\alexander.beletsky.ssh). As soon as I copied keys into /system32/config/systemprofile application started to work as expected.

My question is, why does w3wp.exe thinks that its profile in /system32/config/systemprofile? is it possible to change that? it is expected behaviour for application pool or just issue of my machine?

Waiting for any clues!

As my machine on which this works has the same value in enviroment page of process hacker, and still

Environment.GetFolderPath(Environment.SpecialFolder.LocalApplicationData) has value of my user appData, and I have SP1, I think that it should not be related to it, but to something in your configuration that could have been changed. Check if your inetmgr has properly set identity for your application. Open C:\inetpub\temp\appPools\yourAppPoolName\yourAppPoolName.config and check if this setting exists:

Not the answer you're looking for? Browse other questions tagged asp.net-mvc windows git iis iis-7.5 or ask your own question.