Is there any way to reset/clear browser's localStorage in javascript?

Use this to clear localStorage:

If you want to remove a specific Item or variable from the user's local storage, you can use

Here is a function that will allow you to remove all localStorage items with exceptions. You will need jQuery for this function. You can download the gist.

If you need to clear the local storage data use:

To remove a particular item from the local storage use :

Localstorage is attached on the global window. When we log localstorage in the chrome devtools we see that it has the following APIs: 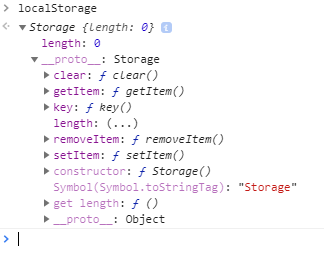 We can use the following API's for deleting items:

Use this for clear all stored key.

If you want to clear/remove only specific key/value then you can use removeItem(key).

To remove particular value by id :

First things first, you need to check to make sure that localStorage is enabled. I would recommend doing it like this:

For example, you could clear the localStorage after an error occurs in webkit browsers like so.

In the above example, you need the .bind(window) because without it, the localStorage.clear function will run in the context of the window object, instead of the localStorage object making it silently fail. To demonstrate this, look at the below example:

is the same as:

This code here you give a list of strings of keys that you don't want to delete, then it filters those from all the keys in local storage then deletes the others.

To confirm if localstorage is empty use this code:

if it returns null then your localstorage is cleared.

If someone is looking for a way to clear the localStorage whenever a browser tab is closed, the below code works. (sample use case: keep some copied data in localStoarge, to paste on another tab - but at the same time, needs the cache to not appear on new tabs, whenever all the previous tabs gets closed)

It adds an eventListener to the window, to detect tab closing and just before closed, it clears the tab's localStorage (of specified key). It will not clear localStorage (of the same key) on other tabs.

This is a great solution, if we want to clear localStorage only in the closed tab, and keep the localStorage (of the same key) on other tabs intact.

Not the answer you're looking for? Browse other questions tagged javascript local-storage or ask your own question.

198
How to remove and clear all localStorage data
-2
How Can we clear browser local storage from a webpage
2937
How to store objects in HTML5 localStorage
473
How to delete a localStorage item when the browser window/tab is closed?
3
How to clear Local Storage from client whenever i publish new code
4
remove value from localstorage javascript
3
Delete Entire Local Storage Object
1
Clearing local storage in JavaScript
0
How do I use a for loop with localStorage to remove an item?
0
Twitter typeahead .js file not updating
See more linked questions