How do I create a unique constraint that also allows nulls?

I want to have a unique constraint on a column which I am going to populate with GUIDs. However, my data contains null values for this columns. How do I create the constraint that allows multiple null values?

Then see this code for what I'm trying to achieve:

The final statement fails with a message:

How can I change my schema and/or uniqueness constraint so that it allows multiple NULL values, while still checking for uniqueness on actual data?

What you're looking for is indeed part of the ANSI standards SQL:92, SQL:1999 and SQL:2003, ie a UNIQUE constraint must disallow duplicate non-NULL values but accept multiple NULL values.

In the Microsoft world of SQL Server however, a single NULL is allowed but multiple NULLs are not...

In SQL Server 2008, you can define a unique filtered index based on a predicate that excludes NULLs:

In earlier versions, you can resort to VIEWS with a NOT NULL predicate to enforce the constraint.

You can create a unique index that accept multiple NULLs with a WHERE clause. See the answer below.

You cannot create a UNIQUE constraint and allow NULLs. You need set a default value of NEWID().

Update the existing values to NEWID() where NULL before creating the UNIQUE constraint.

In Lower Versions, A Materialized View Is Still Not Required

For SQL Server 2005 and earlier, you can do it without a view. I just added a unique constraint like you're asking for to one of my tables. Given that I want uniqueness in column SamAccountName, but I want to allow multiple NULLs, I used a materialized column rather than a materialized view:

You simply have to put something in the computed column that will be guaranteed unique across the whole table when the actual desired unique column is NULL. In this case, PartyID is an identity column and being numeric will never match any SamAccountName, so it worked for me. You can try your own method—be sure you understand the domain of your data so that there is no possibility of intersection with real data. That could be as simple as prepending a differentiator character like this:

Even if PartyID became non-numeric someday and could coincide with a SamAccountName, now it won't matter.

Note that the presence of an index including the computed column implicitly causes each expression result to be saved to disk with the other data in the table, which DOES take additional disk space.

Note that if you don't want an index, you can still save CPU by making the expression be precalculated to disk by adding the keyword PERSISTED to the end of the column expression definition.

In SQL Server 2008 and up, definitely use the filtered solution instead if you possibly can!

Please note that some database professionals will see this as a case of "surrogate NULLs", which definitely have problems (mostly due to issues around trying to determine when something is a real value or a surrogate value for missing data; there can also be issues with the number of non-NULL surrogate values multiplying like crazy).

However, I believe this case is different. The computed column I'm adding will never be used to determine anything. It has no meaning of itself, and encodes no information that isn't already found separately in other, properly defined columns. It should never be selected or used.

So, my story is that this is not a surrogate NULL, and I'm sticking to it! Since we don't actually want the non-NULL value for any purpose other than to trick the UNIQUE index to ignore NULLs, our use case has none of the problems that arise with normal surrogate NULL creation.

All that said, I have no problem with using an indexed view instead—but it brings some issues with it such as the requirement of using SCHEMABINDING. Have fun adding a new column to your base table (you'll at minimum have to drop the index, and then drop the view or alter the view to not be schema bound). See the full (long) list of requirements for creating an indexed view in SQL Server (2005) (also later versions), (2000).

If your column is numeric, there may be the challenge of ensuring that the unique constraint using Coalesce does not result in collisions. In that case, there are some options. One might be to use a negative number, to put the "surrogate NULLs" only in the negative range, and the "real values" only in the positive range. Alternately, the following pattern could be used. In table Issue (where IssueID is the PRIMARY KEY), there may or may not be a TicketID, but if there is one, it must be unique.

If IssueID 1 has ticket 123, the UNIQUE constraint will be on values (123, NULL). If IssueID 2 has no ticket, it will be on (NULL, 2). Some thought will show that this constraint cannot be duplicated for any row in the table, and still allows multiple NULLs.

For people who are using Microsoft SQL Server Manager and want to create a Unique but Nullable index you can create your unique index as you normally would then in your Index Properties for your new index, select "Filter" from the left hand panel, then enter your filter (which is your where clause). It should read something like this:

When I applied the unique index below:

every non null update and insert failed with the error below:

I found this on MSDN

So to get this to work correctly I did this

but i have not tested this

It can be done in the designer as well

Right click on the Index > Properties to get this window 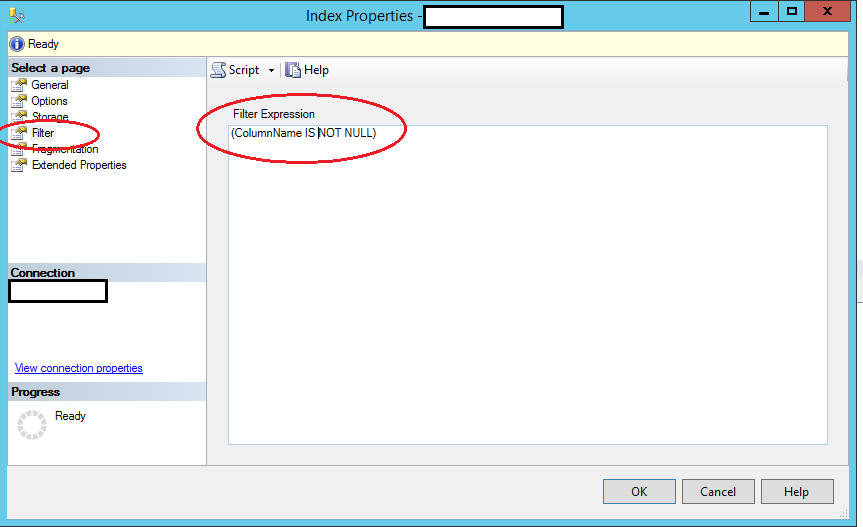 Create a view that selects only non-NULL columns and create the UNIQUE INDEX on the view:

Note that you'll need to perform INSERT's and UPDATE's on the view instead of table.

You may do it with an INSTEAD OF trigger:

In my experience - if you're thinking a column needs to allow NULLs but also needs to be UNIQUE for values where they exist, you may be modelling the data incorrectly. This often suggests you're creating a separate sub-entity within the same table as a different entity. It probably makes more sense to have this entity in a second table.

In the provided example, I would put LibraryCardId in a separate LibraryCards table with a unique not-null foreign key to the People table:

This way you don't need to bother with a column being both unique and nullable. If a person doesn't have a library card, they just won't have a record in the library cards table. Also, if there are additional attributes about the library card (perhaps Expiration Date or something), you now have a logical place to put those fields.

Maybe consider an "INSTEAD OF" trigger and do the check yourself? With a non-clustered (non-unique) index on the column to enable the lookup.

As stated before, SQL Server doesn't implement the ANSI standard when it comes to UNIQUE CONSTRAINT. There is a ticket on Microsoft Connect for this since 2007. As suggested there and here the best options as of today are to use a filtered index as stated in another answer or a computed column, e.g.:

You can create an INSTEAD OF trigger to check for specific conditions and error if they are met. Creating an index can be costly on larger tables.

You can't do this with a UNIQUE constraint, but you can do this in a trigger.

this code if u make a register form with textBox and use insert and ur textBox is empty and u click on submit button .

147
How do you copy a record in a SQL table but swap out the unique id of the new row?
8
How to disable primary key constraint programmatically?
691
How to select all records from one table that do not exist in another table?
0
T-SQL and transaction flow - from first to last
4
How to update column with unique key constraint?
2
UNIQUE constraint exception thrown on empty table INSERT [sql-server]
0
Violation of UNIQUE KEY constraint error when trying to insert valid data