My app has two states: logged in and not logged in, and I have the following architecture (vastly simplified):
- ViewController A which contains a search box and a table view.
- ViewController B which is used for logging in the app.

The flow is the following:
- the user is not logged in;
- A is pushed on the stack. In viewWillAppear I check if the user is logged in and if yes, an async network request is being made and, once that is done, the table is loaded with the data from the network. However since the user is not logged in at this point, the table view is empty;
- the user taps on the search box; because he's not logged in, B is pushed (after a confirmation);
- he logs in successfully in B, then presses a button which pops B and shows A again;
- at this point in time, because he's logged in, from viewWillAppear I do the async request;
- when that is completed, I call reloadData on the table view.

What I notice is that numberOfRowsInSection: is called and it returns the correct result, however cellForRowAtIndexPath: is NOT called afterwards and the table remains empty.

I've checked and reloadData is called on the main thread.

Any idea what can it be? Cause it's driving me nuts!

EDIT: Here's the async bit of code from viewWillAppear in A.

I've checked that the async request completes successfully and that response contains the correct data (this is the array used to back the UITableView).

One valid scenario for why numberOfRowsInSection would be called but cellForRowAtIndexPath would not be called is when the size or positioning of the table does not require any rows to be displayed.

For example, let's say you had a table that was 20 pixels high, but the header for the first section was 30 high and you returned nil for the header (or did not implement viewForHeaderInSection). In this case, no rows would be displayed and it would look like the table just isn't there.

I see you are using IB. The sizing of the table can be deceptive in IB as it is assuming header and footer sizes. I would log the frame for the table so you understand where it is when the appliction is run (versus where it appears in IB). I would also be sure to manually size and position the table's frame before calling reloadData. This will solve this valid case where cellForRowAtIndexPath is not called.

Check that the numberOfSectionsInTableView is not returning 0.

I had the exact same issue and the problem was that I was trying to call reloadData: from another thread. The solution would be:

If you are using a different dataSource, as I was, make sure you are retaining the dataSource. Merely instantiating the class that will be the dataSource and assigning it via tableView.dataSource = myDataClass will not be sufficient as the dataSource property of a tableView is weak and will be released when viewDidLoad completes. All of the other methods were being called for me — even, surprisingly, heightForRowAtIndexPath — so this took me some time to debug.

If a Table View inside a view that conflicts something like Scrool View, it does not called. You should separate the views in your Storyboard or *.xib file.

Everyone keeps talking about height, but my TableView in a StackView with leading alignment ended up with 0 width.

Make sure to check if your TableView is correct size using Debug View Hierarchy.

If you are using auto layout like me and adding tableview to your view controller's view make sure you have added this line when you are allocating your table view.

Silly mistake from my side.

This is embarrassing and perplexing, but here's my fix.

So the weird part is: the identifier _scanResultTable was never declared in my code, anywhere in the project. I have no idea how this compiled (and I recompiled several times).

My root cause was that I had linked my table output to scanResultTable in my ViewController, but was referring to it as _scanResultTable. Once I started using scanResultTable like I should've been, things cleared up. This makes me wonder if objective-c has something special about leading underscores in identifiers...

Edit: It does! Good lord I can't wait to never touch this language again.

I am using a customer datasource and it was released. Because it is a weak reference of tableview.

I'm using ReactiveCocoa. So I've created the model for table view. The data was prepared to be displayed, so numberOfRows and so on was called. But I haven't added the tableview as subview, thus cellForRowAtIndexPath was not called)))

In my case, I had the TableView inside a StackView. When I put it outside the StackView it worked.

We had the same/similar issue. The code reached numberOfSections and numberOfRowsInSection (and it even returned values) but could not reach cellForRowAt. At the time, Table View in the Storyboard had only constraints for right side, left side and top, but not for bottom. Once we added constraint to the bottom, it worked like a charm.

So, check that you provide all needed constraints for the Table View.

share|improve this answer
answered Jan 10 at 12:05

Are you sure that after the user logged in and B is popped the viewWillAppear method in A gets called in order to perform the refresh?

If you show B as a modal controller, when you dismiss it you won't have the viewWillAppear method called.

As far as I know, viewWillAppear/viewDidAppear (and other like it) are events generated by the UINavigationController in the case of navigation events (push/pop viewcontrollers). So maybe that is why you eventually get your refresh when you leave A and return ... it all depends on the way to display the next viewcontroller.

Try to insert new rows manually instead of [self.tableView reloadData]:

Same case here, but it was a mistake:

I included a Scrollview with 2 tablesViews inside a ViewController (design requirements), in the scrollview controller I created the ViewControllers (that contains the TableViews) programatically and I used a weak var to store it, bad idea because they were released at the end of viewDidLoad method.

If you don't see your tableview content, please, check if it was released.

My mistake was very brain-painful for me because all methods (delegate&datasource) were called except viewForCell...

Not working stop calling this method all Data Source and Delegate set properly.

if you have same issue than Solution is set Table View bottom , leading , trailing constrain 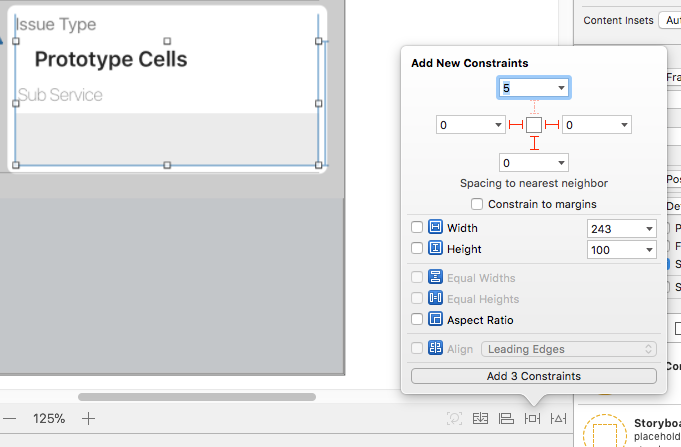 None of the answers here helped me.

I was using doing my constraints programmatically but forgot to write:

Make sure your constraints are correct and none of them is removed at build time.

This maybe too obvious but in my case i was deleting an element (Label) which was a reference to the top margin of my table programmatically, so it was not a problem with delegate/source but of the table having some problems with the content-size / height, this conflict created a weird behaviour, calling numberOfRowsInSection but not cellForRowAt indexPath

Wasted hours and then found out that my tableview was inside a stackview. As soon as I removed the stackview, it worked like a charm. For me it's Xcode 11.3 .

Not the answer you're looking for? Browse other questions tagged iphone ios uitableview or ask your own question.