How can I sort the output of a generated SQL script?

I'm comparing two SQL server databases (development and live environment, SQL2005 and SQL2008 respectively) to check for differences between the two. If I generate a script for each database I can use a simple text comparison to highlight the differences.

Problem is the scripts need to be in the same order to ease comparison and avoid simple differences where the order of the stored procedures is different, but their contents are the same.

So if I generate this from development:

And this from live:

Comparing the two highlights lines 2 and 3 as different, but they're actually identical, just the generate script wizard did table3 before table 2 on the live environment. Add in 100's of tables, stored procedures, views, etc. and this quickly becomes a mess.

My current options are:

Hopefully, I'm only missing the checkbox that says "Sort scripts by name", but I can't see anything that does this. I don't feel I should have to pay for something as simple as a 'sort output' option or lots of other unneeded tools, so option 4 should just be a last resort.

EDIT I have full access to both environments, but the live environment is locked down and hosted on virtual servers, with remote desktoping the typical way to access live. My preference is to copy what I can to development and compare there. I can generate scripts for each type of object in the database as separate files (tables, SP's, functions, etc.)

Depending on your version of Visual Studio 2010 (if you have it), you can do this easily via the data menu, based on your original intent, you might save yourself some time.

Edit: Generating the actual DB's and then comparing the schema comparison tool as shown below is the same net effect as comparing two script files and you don't have to worry about line breaks etc. 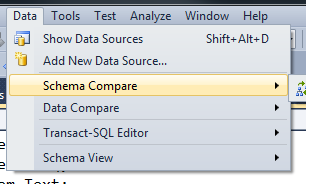 Red_gate's SQLCompare is the best thing to use for this, worth every penny.

This is quite hard to do with scripts - because SQL will tend to generate the tables/objects in the order that makes sense to it (eg dependency order) rather than alphabetical order.

There are other complications that come up when you start comparing databases - for example the names of constraint objects may be randomly generated, so the same constraint may have different names in each DB.

Your best bet is probably option (4) I'm afraid ... an evaulation copy of Red Gate Sql Compare - free for 30 days. I've used it a lot and its very good at pinpointing the differences that matter. It will then generate you a script to bring the two schemas back into sync.

edit: or Visual Studio 2010 Ultimate (or Premium) can do it apparently - see kd7's answer

You can use WinMerge to some extent to find out if the lines are found elsewhere when comparing two generated scripts. I think it works in the simpler cases.

Using WinMerge v2.12.4.0 Unicode. Note the color usage for highlighting these below.

Here is the help for the Edit -> Options -> Compare "Enable moved block detection":

3.6. Enable moved block detection Disabled (default): WinMerge does not detect when differences are due to moved lines.

Enabled: WinMerge tries to detect lines that are moved (in different locations in each file). Moved blocks are indicated by the Moved and Selected Moved difference colors. If the Location bar is displayed, corresponding difference locations in the left and right location bars are connected with a line. Showing moved blocks can make it easier to visualize changes in files, if there are not too many.

For an example, see the Location pane description in Comparing and merging files.

I had a similar issue. My database is SQL Server 2008. I realized that, if I generate scripts of through object explorer details, then I get that order that I are viewing names. In this way I was able to compare 2 databases and findout their differences.

The only problem with this is that I had to take out separate scripts for tables/ stored procedures, triggers etc.

But we can compare easily.

1364
How can I remove duplicate rows?
1746
How do I perform an IF...THEN in an SQL SELECT?
2124
How to return only the Date from a SQL Server DateTime datatype
2117
How to check if a column exists in a SQL Server table
2324
How to concatenate text from multiple rows into a single text string in SQL Server
439
How to avoid the "divide by zero" error in SQL?
965
How can I get column names from a table in SQL Server?
1543
How can I do an UPDATE statement with JOIN in SQL Server?
4160
How do I UPDATE from a SELECT in SQL Server?
1672
How can I delete using INNER JOIN with SQL Server?