But, I'd like to know more about the internals of getchar() and stdin. I know that getchar() just ultimately calls fgetc(stdin).

My question is about buffering, stdin and getchar() behavior. Given the classic K&R example:

It seems to me that getchar()'s behavior could be described as follows:

If there's nothing in the stdin buffer, let the OS accept user input until [enter] is pressed. Then return the first character in the buffer.

Assume the program is run and the user types "anchovies."

I've spend a little time with the c source, but it seems this is more of a behavioral artifact of stdin rather than fgetc().

Am I wrong here? Thanks for your insight.

The behaviour you're observing has nothing to do with C and getchar(), but with the teletype (TTY) subsystem in the OS kernel.

For this you need to know how processes get their input from your keyboard and how they write their output to your terminal window (I assume you use UNIX and the following explanations apply specifically to UNIX, i.e. Linux, macOS, etc.): 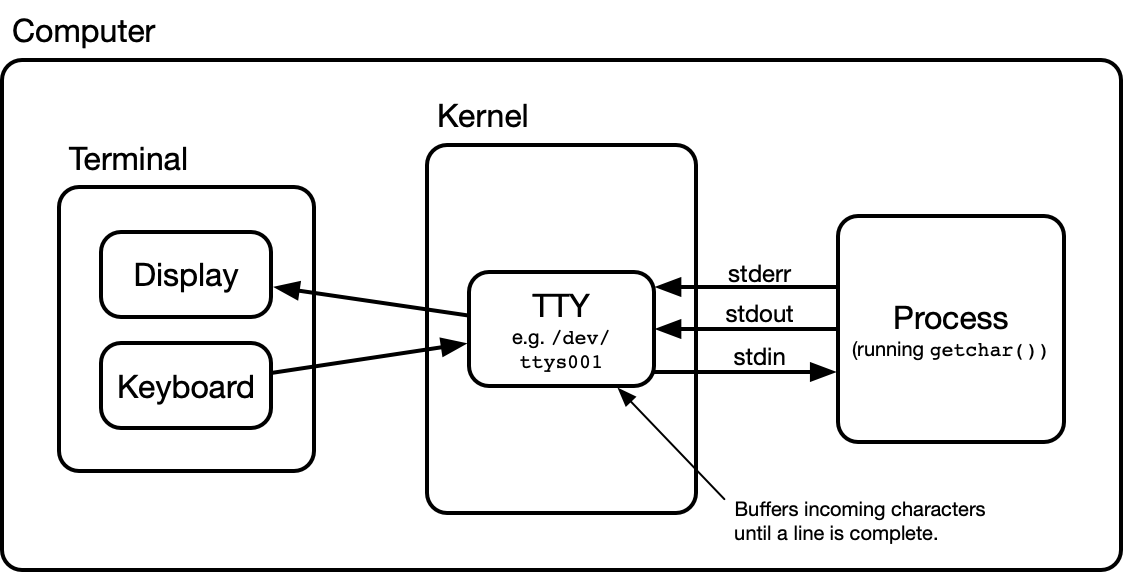 The box entitled "Terminal" in above diagram is your terminal window, e.g. xterm, iTerm, or Terminal.app. In the old times, terminals where separate hardware devices, consisting of a keyboard and a screen, and they were connected to a (possibly remote) computer over a serial line (RS-232). Every character typed on the terminal keyboard was sent over this line to the computer and consumed by an application that was connected to the terminal. And every character that the application produced as output was sent over the same line to the terminal which displayed it on the screen.

So how does this communication mechanism work? UNIX has a subsystem called TTY in the kernel (TTY stands for teletype, which was the earliest form of computer terminals that didn't even have a screen, just a keyboard and a printer). You can think of TTY as a generic driver for terminals. TTY reads bytes from the port to which a terminal is connected (coming from the keyboard of the terminal), and writes bytes to this port (being sent to the display of the terminal).

Now, the crucial point: the TTY device does more than just passing every input character to the standard input of the application. By default, the TTY device applies a so-called line discipline to the received characters. That means, it locally buffers them and interprets delete, backspace and other line editing characters, and only passes them to standard input of the application when it receives a carriage return or line feed, which means that the user has finished entering and editing a whole line.

In that sense, there is nothing special about the behaviour of getchar(). It just immediately reads characters in stdin as they become available. The line buffering that you observe happens in the TTY device in the kernel.

Now to the interesting part: this TTY device can be configures. You can do it, for example, from a shell with the stty command. This allows you to configure almost every aspect of the line discipline that the TTY device applies to incoming characters. Or you can disable any processing whatsoever by setting the TTY device to raw mode. In this case, the TTY device forwards every received character immediately to stdin of the application without any form of editing.

If you enable raw mode in the TTY device, you will see that getchar() immediately receives every character that you type on the keyboard. The following C program demonstrates this:

The program sets the current process' TTY device to raw mode, then uses getchar() to read and print characters from stdin in a loop. The characters are printed as ASCII codes in hexadecimal and octal notation. The program specially interprets the ETX character (ASCII code 0x03) as a trigger to terminate. You can produce this character on your keyboard by typing Ctrl-C.

getchar()'s input is line-buffered, and the input-buffer is limited, usually it's 4 kB. What you see at first is the echo of each character you're typing. When your press ENTER, then getchar() starts returning characters up to the LF (which is converted to CR-LF). When you keep on pressing keys without LF for some time, it stops echoing after 4096 characters, you have to press ENTER to continue.

Not necessarily. getchar and getc might as well expand to the actual procedure of reading from a file, with fgetc implemented as

Hey, there's nothing in the buffer, so let stdin gather what the user types. [...] it seems this is more of a behavioral artifact of stdin rather than fgetc().

I can only tell you what I know, and that is how Unix/Linux works. On that platform, a FILE (including the thing that stdin points to) holds a file descriptor (an int) that is passed to the OS to indicate from which input source the FILE gets data, plus a buffer and some other bookkeeping stuff.

The "gather" part then means "call the read system call on the file descriptor to fill the buffer again". This varies per implementation of C, though.

5
getchar and putchar
0
How do I properly utilize fgets() and strncmp() functions?

2908
What is the difference between #include <filename> and #include "filename"?
3006
How do I set, clear, and toggle a single bit?
4
clearing stdin buffer ?
4
Confusion about how a getchar() loop works internally
0
why getchar() function work different in a loop?