What is the difference between atomic and critical in OpenMP?

What is the difference between atomic and critical in OpenMP?

I can do this

but isn't this same as

The effect on g_qCount is the same, but what's done is different.

An OpenMP critical section is completely general - it can surround any arbitrary block of code. You pay for that generality, however, by incurring significant overhead every time a thread enters and exits the critical section (on top of the inherent cost of serialization).

An atomic operation has much lower overhead. Where available, it takes advantage on the hardware providing (say) an atomic increment operation; in that case there's no lock/unlock needed on entering/exiting the line of code, it just does the atomic increment which the hardware tells you can't be interfered with.

The upsides are that the overhead is much lower, and one thread being in an atomic operation doesn't block any (different) atomic operations about to happen. The downside is the restricted set of operations that atomic supports.

Of course, in either case, you incur the cost of serialization.

In OpenMP, all the unnamed critical sections are mutually exclusive.

The most important difference between critical and atomic is that atomic can protect only a single assignment and you can use it with specific operators.

The fastest option (not always applicable) is to give each thread its own counter and make reduce operation when you need total sum.

The limitations of atomic are important. They should be detailed on the OpenMP specs. MSDN offers a quick cheat sheet as I wouldn't be surprised if this will not change. (Visual Studio 2012 has an OpenMP implementation from March 2002.) To quote MSDN:

The expression statement must have one of the following forms:

I recommend to use atomic when you can and named critical sections otherwise. Naming them is important; you'll avoid debugging headaches this way.

Already great explanations here. However, we can dive a bit deeper. To understand the core difference between the atomic and critical section concepts in OpenMP, we have to understand the concept of lock first. Let's review why we need to use locks.

In order to synchronize the threads in a multi-threaded program, we'll use lock. When the access is required to be restricted by only one thread at a time, locks come into play. The lock concept implementation may vary from processor to processor. Let's find out how a simple lock may work from an algorithmic point of view.

The given algorithm can be implemented in the hardware language as follows. We'll be assuming a single processor and analyze the behavior of locks in that. For this practice, let's assume one of the following processors: MIPS, Alpha, ARM or Power.

This program seems to be OK, but It is not. The above code suffers from the previous problem; synchronization. Let's find the problem. Assume the initial value of lock to be zero. If two threads run this code, one might reach the SW R1, lock before the other one reads the lock variable. Thus, both of them think that the lock is free. To solve this issue, there is another instruction provided rather than simple LW and SW. It is called Read-Modify-Write instruction. It is a complex instruction (consisting of subinstructions) which assures the lock acquisition procedure is done by only a single thread at a time. The difference of Read-Modify-Write compared to the simple Read and Write instructions is that it uses a different way of Loading and Storing. It uses LL(Load Linked) to load the lock variable and SC(Store Conditional) to write to the lock variable. An additional Link Register is used to assure the procedure of lock acquisition is done by a single thread. The algorithm is given below.

When the link register is reset, if another thread has assumed the lock to be free, it won't be able to write the incremented value to the lock again. Thus, the concurrency of access to the lock variable is acquired.

The core difference between critical and atomic comes from the idea that:

Why to use locks (a new variable) while we can use the actual variable (which we are performing an operation on it), as a lock variable?

Using a new variable for locks will lead to critical section, while using the actual variable as a lock will lead to atomic concept. The critical section is useful when we are performing a lot of computations (more than one line) on the actual variable. That's because, if the result of those computations fails to be written on the actual variable, the whole procedure should be repeated to compute the results. This can lead to a poor performance compared to waiting for the lock to be released before entering a highly-computational region. Thus, it is recommended to use the atomic directive whenever you want to perform a single computation (x++, x--, ++x, --x, etc.) and use critical directive when a more computationally complex region is being done by the intensive section.

Atomic clause is only applicable to one single statement that has any math symbol in it but the difference is not only limited by the size of the expressions. The atomic clause protects the address location that's assigned the element to the left and only guarantees the assignment to that variable. so you may assume that if any function call exists on the right of the statement it could be executed parallel.

here fnk(); could be called by multiple threads at the same time but the assignment to the a must be mutually exclusive. As you can see below, fnk() call is intervined by another thread and we got the result 0 2 2 and 0 respectively. That would't be the case if we'd used critical clause. 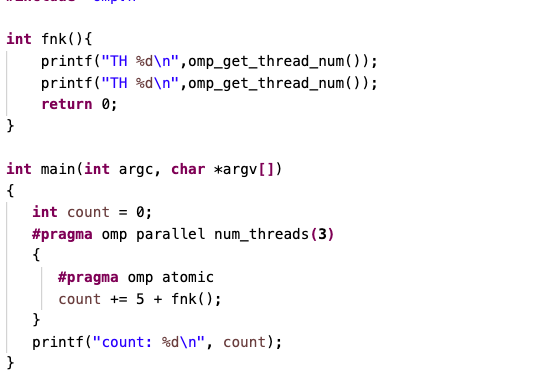 atomic is a single statement Critical section, i.e. you lock for one statement execution

critical section is a lock on a block of code