With that said, I did some research and it looks as if I go about extending MediaController, I can change position and other properties. I have created a new class:

and in my parent class:

It the above is working, my default MediaController still pops up and has all the same functionality. The question is now, how do I go about actually repositioning the controller from inside my VFPlayer class? 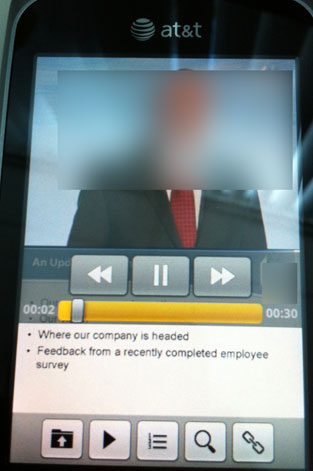 The preferred way to control the location of the MediaController is via setAnchorView. Unfortunately, the VideoView seems to override this value to be the parent view of itself whenever a new video is loaded. To counter act this, a class like the following should work

Once you do that, you can use this MediaController to set the Anchor to whichever view you desire without worrying about your VideoView changing it. After that, its just a matter of getting a view in the right place to anchor it too.

You should be able to override the

method in your VFPlayer class. From here put the view/widget where you want it.

What i have learning some months ago about Android is this :

When difficultys come , make your own components .

What i mean , that is easy to make your components layout , width 4 or five ImageButtons/Buttons , and link them to the VideoView component functions (or SurfaceView for a better control ).

Some of the VideoView functions (extracted from here):

Then you can make some Layout with the buttons in order to put them where you want , without the problems of trying to extend a rigid component like V.

Not the answer you're looking for? Browse other questions tagged android subclass mediacontroller or ask your own question.

67
MediaController positioning over VideoView
4
How to create videoview like youtube "small screen and full screen play in android "
4
Android Video Control Position in Titanium
2
MediaController blocking other ui elements
2
Android It is possible to change the MediaController graphics?

4102
How do you close/hide the Android soft keyboard programmatically?
3037
How to stop EditText from gaining focus at Activity startup in Android
2927
Is there a unique Android device ID?
10
How to add Canvas in a specific LinearLayout?
2120
What is 'Context' on Android?
2
How to Play mp4 Video in Android Emulator Using Remote URL?
20
Why does EditText retain its Activity's Context in Ice Cream Sandwich
3817
Proper use cases for Android UserManager.isUserAGoat()?
1
How to get selected items in a custom listview to another activity in same custom listview