I read SO about another user encountering similar error, but this error is in different case.

I received this message when I added a View Controller initially:

I use this code to call the introduction view controller:

After this IntroVC view controller shows up, the above error shows.

ios ios4 uitabbarcontroller
Share
Improve this question
edited May 23 '17 at 11:47

Without seeing more of the surrounding code I can't give a definite answer, but I have two theories.

I fixed this error by changing animated from YES to NO.

As posted by danh

You can generate this warning by presenting the modal vc before the app is done initializing. i.e. Start a tabbed application template app and present a modal vc on top of self.tabBarController as the last line in application:didFinishLaunching. Warning appears. Solution: let the stack unwind first, present the modal vc in another method, invoked with a performSelector withDelay:0.0

Another solution for many cases is to make sure that the transition between UIViewControllers happens after the not-suitable (like during initialization) procedure finishes, by doing:

This is general for also pushViewController:animated:, etc.

I had the same problem. I called a method inside viewDidLoad inside my first UIViewController

Inside the second UIViewController I did the same also with 0.5 seconds delay. After changing the delay to a higher value, it worked fine. It's like the segue can't be performed too fast after another segue.

I had this problem because of a typo:

It was calling "WillAppear" in the super instead of "DidAppear"

I had lot of problem with the same issue. I solved this one by

I have the viewcontroller in my storyboard, for some reason using only [[introvc alloc] init]; did not work for me.

I solved it by writing

I had this problem with a third party code. Someone forgot to set the super inside of viewWillAppear and viewWillDisappear in a custom TabBarController class.

If you're using transitioningDelegate (not the case in this question's example), also set modalPresentationStyle to .Custom.

I had the same error. I have a tab bar with 3 items and I was unconsciously trying to call the root view controller of item 1 in the item 2 of my tab bar using performSegueWithIdentifier.

Apparently, you cannot call the root view controller of an item to another item.

I had the same problem and thought I would post in case someone else runs into something similar.

In my case, I had attached a long press gesture recognizer to my UITableViewController.

In my onLongPress selector, I launched my next view controller.

In my case, I received the error message because the long press recognizer fired more than one time and as a result, my "SomeViewController" was pushed onto the stack multiple times.

The solution was to add a boolean to indicate when the SomeViewController had been pushed onto the stack. When my UITableViewController's viewWillAppear method was called, I set the boolean back to NO.

I have UITabBarViewController in storyboard and I had selectedIndex property like this: 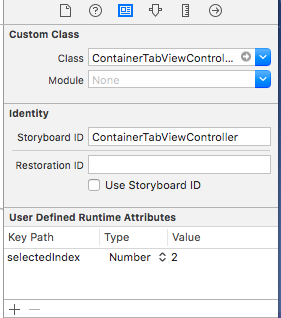 But I delete it, and add in my viewDidLoad method of my initial class, like this:

I hope I can help someone.

As @danh suggested, my issue was that I was presenting the modal vc before the UITabBarController was ready. However, I felt uncomfortable relying on a fixed delay before presenting the view controller (from my testing, I needed to use a 0.05-0.1s delay in performSelector:withDelay:). My solution is to add a block that gets called on UITabBarController's viewDidAppear: method:

I had the same issue. When developing I wanted to bypass screens. I was navigating from one view controller to another in viewDidLoad by calling a selector method.

This error will be displayed when trying to present an UINavigationController that is lazily initialized via a closure.

I had this problem when I had navigated from root TVC to TVC A then to TVC B. After tapping the "load" button in TVC B I wanted to jump straight back to the root TVC (no need to revisit TVC A so why do it). I had:

...which gave the error "Unbalanced calls to begin/end etc". The following fixed the error, but no animation:

This was my final solution, no error and still animated:

I encountered this error when I hooked a UIButton to a storyboard segue action (in IB) but later decided to have the button programatically call performSegueWithIdentifier forgetting to remove the first one from IB.

In essence it performed the segue call twice, gave this error and actually pushed my view twice. The fix was to remove one of the segue calls.

Hope this helps someone as tired as me!

Not the answer you're looking for? Browse other questions tagged ios ios4 uitabbarcontroller or ask your own question.