How to make my Haskell program faster? Comparison with C

I'm working on an implementation of one of the SHA3 candidates, JH. I'm at the point where the algorithm pass all KATs (Known Answer Tests) provided by NIST, and have also made it an instance of the Crypto-API. Thus I have began looking into its performance. But I'm quite new to Haskell and don't really know what to look for when profiling.

At the moment my code is consistently slower then the reference implementation written in C, by a factor of 10 for all input lengths (C code found here: http://www3.ntu.edu.sg/home/wuhj/research/jh/jh_bitslice_ref64.h).

Now I don't expect you to wade through all my code, rather I would just want some tips on a couple of functions. I have run some performance tests and this is (part of) the performance file generated by GHC:

Now quickly about the JH algorithm:

It's a hash algorithm which consists of a compression function F8, which is repeated as long as there exists input blocks (of length 512 bits). This is just how the SHA-functions operate. The F8 function consists of the E8 function which applies a round function 42 times. The round function itself consists of three parts: a sbox, a linear transformation and a permutation (called swap in my code).

Thus it's reasonable that most of the time is spent in the round function. Still I would like to know how those parts could be improved. For instance: the blockMap function is just a utility function, mapping a function over the elements in a 4-tuple. So why is it performing so badly? Any suggestions would be welcome, and not just on single functions, i.e. are there structural changes you would have done in order to improve the performance?

I have tried looking at the Core output, but unfortunately that's way over my head.

I attach some of the heap profiles at the end as well in case that could be of interest.

Unfortunately there seems to be a bug on the Linux plattform when compiling via C or LLVM, giving me the error:

Error: .size expression for XXXX does not evaluate to a constant

so I have not been able to see the effect of that. 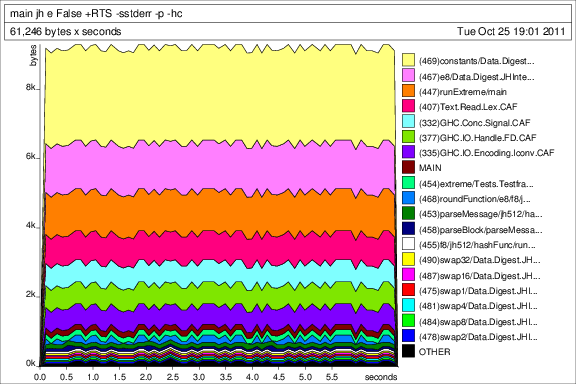 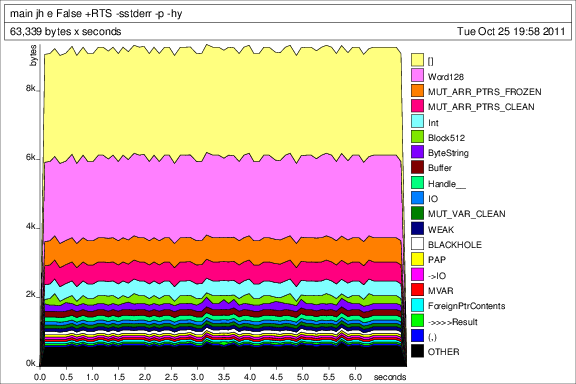 EDIT: And cabalize your git repo along with a benchmark so we can help you easier ;-). Good work on including a crypto-api instance.

The lower graph shows that a lot of memory is occupied by lists. Unless there are more lurking in other modules, they can only come from e8. Maybe you'll have to bite the bullet and make that a loop instead of a fold, but for starters, since Block1024 is a pair, the foldl' doesn't do much evaluation on the fly (unless the strictness analyser has become significantly better). Try making that stricter, data Block1024 = B1024 !Block512 !Block512, perhaps it also needs {-# UNPACK #-} pragmas. In roundFunction, use rem instead of mod (this will only have minor impact, but it's a bit faster) and make the let bindings strict. In the swapN functions, you might get better performance giving the constants in the form W x y rather than as 128-bit hex numbers. I can't guarantee those changes will help, but that's what looks most promising after a short glance.

Ok, so I thought I would chime in with an update of what I have done and the results obtained thus far. Changes made:

I compile with the following options:

And the results? Roughly 50 % reduction in time. On an input of ~107 MB, the code now use 3 minutes as compared to the previous 6-7 minutes. The C version uses 42 seconds.

Things I tried, but which didn't result in better performance:

All of these attempts gave worse performance than what I have currently. I don't know if thats because I'm doing it wrong (especially the unrolling of e8), or because they just are worse options.

Still I have some new questions with these new tweaks.

It looks like you did a fair amount of tweaking already; I'm curious what the performance is like without explicit strictness annotations (BangPatterns) and the various compiler pragmas (UNPACK, INLINE)... Also, a dumb question: what optimization flags are you using?

Anyway, two suggestions which may be completely awful:

At any rate, rather than looking at the Core output, try looking at the intermediate C files (*.hc) instead. It can be hard to wade through, but sometimes makes it obvious where the compiler wasn't quite as sharp as you'd hoped.

Not the answer you're looking for? Browse other questions tagged performance haskell profiling or ask your own question.

755
Getting started with Haskell
106
Tools for analyzing performance of a Haskell program
14
On improving Haskell's performance compared to C in fibonacci micro-benchmark
695
Speed comparison with Project Euler: C vs Python vs Erlang vs Haskell
10
Analyzing slow performance of a Haskell program
15
Is indexing of Data.Vector.Unboxed.Mutable.MVector really this slow?
23
Haskell performance implementing unix's “cat” program with Data.ByteString
14
Why is this Haskell code so much slower than the C equivalent? Unboxed vectors and bangs already used
6
How can I determine if a function is being memoized in Haskell?
0
Faster SumSquareDifference in Haskell