Why is this object property undefined?

Consider the code below. The first console.log correctly logs the image, and you can see its properties in the image below. However, when I try logging one if its properties to the console, I get undefined!

The result in the console: 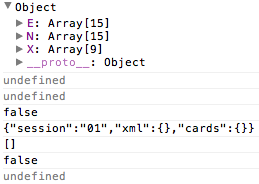 FWIW, I get the same thing in Firebug (the above console image is Chrome).

I've solved the problem. Basically, the object in question (that.data[0].cards) has its properties created by a function a() that runs after all the AJAX requests for the necessary XML files have been processed. I allow the requests to run asynchronously, using a counter to determine in the success callback function if a() should be called yet.

After a() runs, function b() is supposed to perform operations on that.data[i].cards. However, b() was running prior to a() being called because of a()'s reliance on the asynchronous requests. So the solution was simply to make a() call b().

So this turned out to be a pretty simple mistake on my part. What made it so confusing was the fact that logging that.data[0].cards to the console showed me that in fact the cards object had already been built, when in fact it had not yet. So the console was providing me with incorrect--or at least unclear--information.

Thanks for everyone's help last night! Upvotes all around :)

I think the object keys have unprintable characters, such can be replicated like this:

Edit: you can see if this is the case for your object keys:

Edit2: Since you can't do that I came up with another way to see if there are unprintable characters:

Copypaste the key string like this: (go all the way as much as you can on both ends so you pick any invisible characters)

Then dump your clipboard like this (Make sure you are using double quotes):

Not the answer you're looking for? Browse other questions tagged javascript object undefined object-properties or ask your own question.