I'm running a server at my office to process some files and report the results to a remote MySQL server.

The files processing takes some time and the process dies halfway through with the following error:

I've heard about the MySQL setting, wait_timeout, but do I need to change that on the server at my office or the remote MySQL server?

I have encountered this a number of times and I've normally found the answer to be a very low default setting of max_allowed_packet.

Note: Just create the line if it does not exist

Note: This can be set on your server as it's running.

Note: On Windows you may need to save your my.ini or my.cnf file with ANSI not UTF-8 encoding.

I had the same problem but changeing max_allowed_packet in the my.ini/my.cnf file under [mysqld] made the trick.

now restart the MySQL service once you are done.

I used following command in MySQL command-line to restore a MySQL database which size more than 7GB, and it works.

It may be easier to check if the connection and re-establish it if needed.

See PHP:mysqli_ping for info on that.

Message: MySQL server has gone away

Generally you can retry connecting and then doing the query again to solve this problem - try like 3-4 times before completely giving up.

I'll assuming you are using PDO. If so then you would catch the PDO Exception, increment a counter and then try again if the counter is under a threshold.

If you have a query that is causing a timeout you can set this variable by executing:

Where 300 is the number of seconds you think the maximum time the query could take.

Further information on how to deal with Mysql connection issues.

EDIT: Two other settings you may want to also use is net_write_timeout and net_read_timeout.

There are several causes for this error.

How to debug it:

In MAMP (non-pro version) I added

If you are using xampp server :

This error is occur due to expire of wait_timeout .

On windows those guys using xampp should use this path xampp/mysql/bin/my.ini and change max_allowed_packet(under section[mysqld])to your choice size. e.g

Gave me a headache for sometime till i discovered this. Hope it helps.

I was getting this same error on my DigitalOcean Ubuntu server.

I tried changing the max_allowed_packet and the wait_timeout settings but neither of them fixed it.

It turns out that my server was out of RAM. I added a 1GB swap file and that fixed my problem.

Check your memory with free -h to see if that's what's causing it.

It was RAM problem for me.

I was having the same problem even on a server with 12 CPU cores and 32 GB RAM. I researched more and tried to free up RAM. Here is the command I used on Ubuntu 14.04 to free up RAM:

And, it fixed everything. I have set it under cron to run every hour.

And, you can use this command to check how much free RAM available:

In my case it was low value of open_files_limit variable, which blocked the access of mysqld to data files.

I checked it with :

After I changed the variable to big value, our server was alive again :

Hopefully this helps other Wampserver-users out there.

This generally indicates MySQL server connectivity issues or timeouts. Can generally be solved by changing wait_timeout and max_allowed_packet in my.cnf or similar.

I would suggest these values:

It's always a good idea to check the logs of the Mysql server, for the reason why it went away.

It will tell you.

There is an easier way if you are using XAMPP. Open the XAMPP control panel, and click on the config button in mysql section. 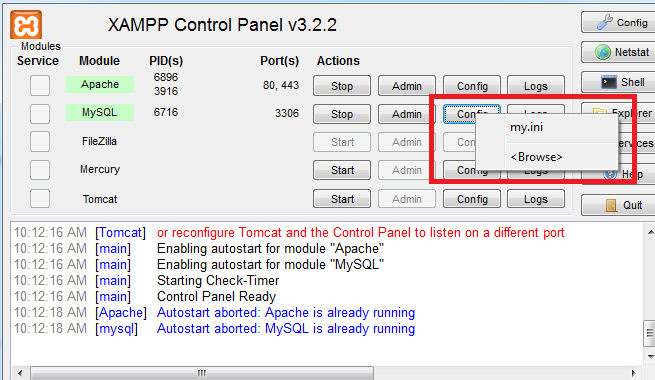 Now click on the my.ini and it will open in the editor. Update the max_allowed_packet to your required size.

Then restart the mysql service. Click on stop on the Mysql service click start again. Wait for a few minutes. 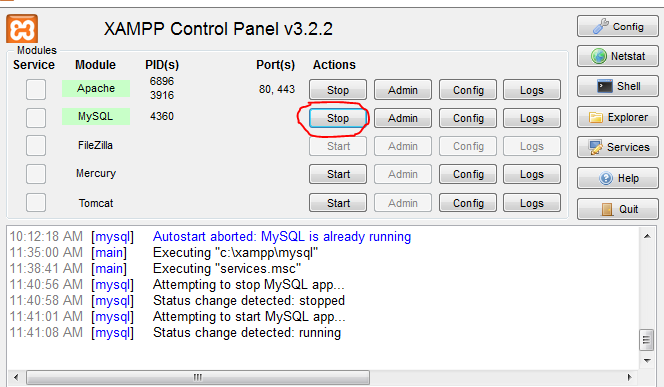 Then try to run your Mysql query again. Hope it will work.

MAMP 5.3, you will not find my.cnf and adding them does not work as that max_allowed_packet is stored in variables.

One solution can be:

For some, you may need to increase the following values as well:

For Vagrant Box, make sure you allocate enough memory to the box

This might be a problem of your .sql file size.

If you are using xampp. Go to the xampp control panel -> Click MySql config -> Open my.ini.

The unlikely scenario is you have a firewall between the client and the server that forces TCP reset into the connection.

I had that issue, and I found our corporate F5 firewall was configured to terminate inactive sessions that are idle for more than 5 mins.

Once again, this is the unlikely scenario.

uncomment the ligne below in your my.ini/my.cnf, this will split your large file into smaller portion

I found the solution to "#2006 - MySQL server has gone away" this error. Solution is just you have to check two files

Path of these files in windows is

In these two files the value of this:

In my case it was:

Make sure in both:

You can directly change the user name and password of phpmyadmin through config.inc.php file

Here you can give new user name and password. After changes save the file and restart WAMP server.

I got Error 2006 message in different MySQL clients software on my Ubuntu desktop. It turned out that my JDBC driver version was too old.

I had the same problem in docker adding below setting in docker-compose.yml:

You can try this code below.

It mitigates the error whatever the reason behind it, especially for the second reason.

If it's caused by low RAM, you either have to raise database connection efficiency from the code, from the database configuration, or simply raise the RAM.

I also encountered this error. But even with the increased max_allowed_packet or any increase of value in the my.cnf, the error still persists.

What I did is I troubleshoot my database:

The solution that I thought of is to reimport the database. Good thing is I have a backup of this database. But I only dropped the problematic table, then import my backup of this table. That solved my problem.

My takeaway of this problem:

For users using XAMPP, there are 2 max_allowed_packet parameters in C:\xampp\mysql\bin\my.ini.

For me it helped to fix one's innodb table's corrupted index tree. I localized such a table by this command

as followed I was able to see only from the mysqld logs /var/log/mysqld.log which table was causing troubles.

The mysqlcheck command did not fix it, but helped to unveil it. Ultimately I fixed it as followed by a regular mysql command from a mysql cli

Just in case this helps anyone:

I got this error when I opened and closed connections in a function which would be called from several parts of the application. We got too many connections so we thought it might be a good idea to reuse the existing connection or throw it away and make a new one like so:

Well turns out we've been a little too thorough with the killing and so the processes doing important things on the old connection could never finish their business. So we dropped these lines

to our configuration file. This fixed our problem for now and we learned something about killing mysql connections.

Not the answer you're looking for? Browse other questions tagged mysql mysql-error-2006 or ask your own question.