How do you use the Immediate Window in Visual Studio?

The Immediate Window is an immensely useful tool for debugging applications. It can be used to execute code statements that are valid in the context of a break point and inspect values. I also use it to type code snippets to learn language features.

How do you use the Immediate Window?

One nice feature of the Immediate Window in Visual Studio is its ability to evaluate the return value of a method particularly if it is called by your client code but it is not part of a variable assignment. In Debug mode, as mentioned, you can interact with variables and execute expressions in memory which plays an important role in being able to do this.

For example, if you had a static method that returns the sum of two numbers such as:

Then in the Immediate Window you can type the following:

As you can seen, this works really well for static methods. However, if the method is non-static then you need to interact with a reference to the object the method belongs to.

For example, let’s say this is what your class looks like:

If the object already exists in memory and it’s in scope, then you can call it in the Immediate Window as long as it has been instantiated before your current breakpoint (or, at least, before wherever the code is paused in debug mode):

In addition, if you want to interact and test the method directly without relying on an existing instance in memory, then you can instantiate your own instance in the Immediate Window:

You can take it a step further and temporarily assign the method's results to variables if you want to do further evaluations, calculations, etc.:

Furthermore, if you don’t even want to declare a variable name for a new object and just want to run one of its methods/functions then do this:

A very common way to see the value of a method is to select the method name of a class and do a ‘Add Watch’ so that you can see its current value in the Watch window. However, once again, the object needs to be instantiated and in scope for a valid value to be displayed. This is much less powerful and more restrictive than using the Immediate Window.

Along with inspecting methods, you can do simple math equations:

Intellisense works in the Immediate Window, but it sometimes can be a bit inconsistent. In my experience, it seems to be only available in Debug mode, but not in design, non-debug mode.

Unfortunately, another drawback of the Immediate Window is that it does not support loops.

Use the Immediate Window to Execute Commands

The Immediate Window can also be used to execute commands. Just type a > followed by the command. 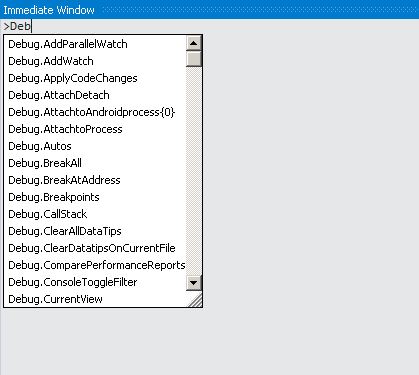 For example >shell cmd will start a command shell (this can be useful to check what environment variables were passed to Visual Studio, for example). >cls will clear the screen.

Here is a list of commands that are so commonly used that they have their own aliases: https://msdn.microsoft.com/en-us/library/c3a0kd3x.aspx

The Immediate window is used to debug and evaluate expressions, execute statements, print variable values, and so forth. It allows you to enter expressions to be evaluated or executed by the development language during debugging.

Here is an example with Immediate Window:

Not the answer you're looking for? Browse other questions tagged visual-studio debugging immediate-window or ask your own question.

23
Visual Studio: Where is IntelliSense in the Immediate Window?
2
Simulating a missing object while debugging
0
writing text to response not working when exception is thrown
1
VBA Access If statement doesn't contain a certain character
0
C# Is it possible to testing if statement using immediate window in visual studio?
0
Error CS0103: The Name 'NNN' Does Not Exist In The Current Context
0
Why is no content displaying after passing SelectedItem as Custom Object into new page?
0
Populating Lists from SQL Server and then store their objects into an ArrayList
0
How do I get input from the keyboard while debugging a Visual Studio 2010 MVC C# program?