I'm working on a project with dependency X. X, in turn, depends on Y.

I used to explicitly include Y in my project's pom. However, it was not used and to make things cleaner, I instead added it to X's pom as a dependency. X is marked as a release dependency.

The problem is that after removing Y from my project's pom and adding it to X's pom, my project isn't picking it up on mvn -U clean package. I know -U update snapshots but not releases.

So, without deleting the ~/.m2/repository directory how can I force a re-download of X's pom? Also, I tried running dependency:purge-local-repository and it didn't work either.

You cannot make Maven re-download dependencies, but what you can do instead is to purge dependencies that were incorrectly downloaded using mvn dependency:purge-local-repository

I just deleted my ~/.m2/repository and that forced a re-download ;)

I think following command may help you!

Thanks to Ali Tokmen answer. I managed to force delete the specific local dependency with the following command:

With this, it removes utils from my .m2/repository and it always re-download the utils JAR dependency when I run mvn clean install.

Project right click-> Maven -> Update Project and check the checkboxes as in the screen shot. It will update releases as well :) 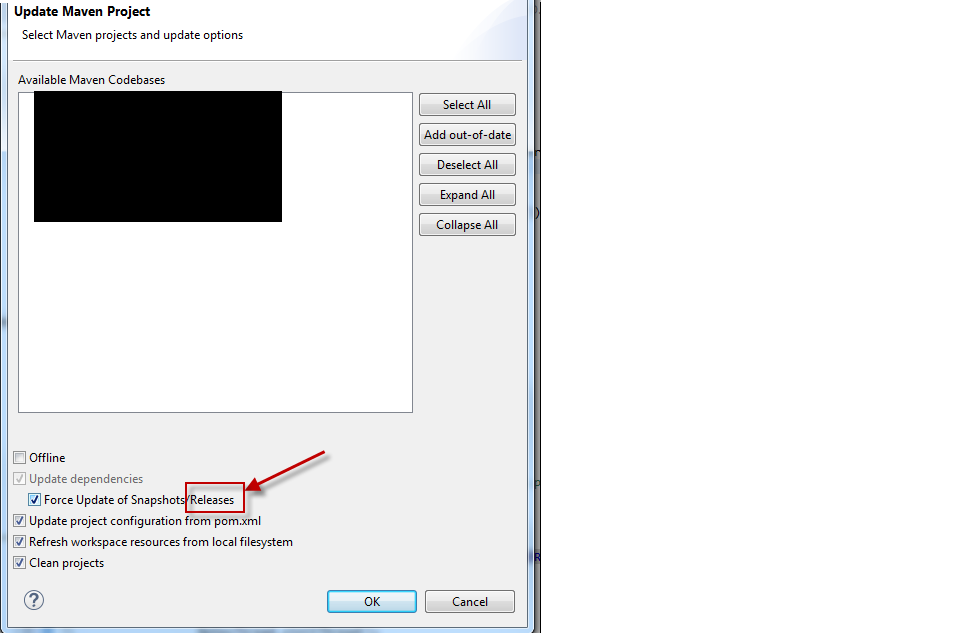 -U means force update of dependencies.

If you want to update a single dependency without clean or -U you could just remove it from your local repo and then build.

When you added it to X, you should have incremented X's version number i.e X-1.2
Then X-1.2 should have been installed/deployed and you should have changed your projects dependency on X to be dependent on the new version X-1.2

If you know the group id of X, you can use this command to redownload all of X and it's dependencies

It does the same thing as the other answers that propose using dependency:purge-local-repository, but it only deletes and redownloads everything related to X.

If you really want to force-download all dependencies, you can try to re-initialise the entire maven repository. Like in this article already described, you could use:

Just delete ~/.m2/repository...../actual_path where the invalid LOC is coming as it forces to re-download the deleted jar files. Dont delete the whole repository folder instead delete the specific folder from where the error is coming.

If you are working on IntelliJ just go to Maven Settings and change the Local Repository path to somewhere else. You may need to tick the override checkbox near there.

Most answers provided above would solve the problem.

But if you use IntelliJ and want it to just fix it for you automatically, go to Maven Settings.

Not the answer you're looking for? Browse other questions tagged maven-2 maven dependency-management maven-dependency-plugin or ask your own question.

135
Specifying Maven's local repository location as a CLI parameter
3
Maven - Disable local repository completely and only go to remote
1
How to reinstall Maven libraries?
2
what does happen with maven dependencies
1
Unable to package my Spring boot application as a runnable fat Jar
1
Java 9 throws new error while creating Tomcat Server [ExecutionException caused by ZipException]
0
How to ask intelliJ to force download maven dependencies during build?
0
How can i force update of maven dependencies sources?
1
Error when I downgrade primefaces dependency version from 6.0 to 5.3
-1
Unable to instantiate FirefoxDriver class in selenium even though class is present inside JAR
See more linked questions

803
How do I tell Maven to use the latest version of a dependency?
2494
How can I create an executable JAR with dependencies using Maven?
412
Maven Modules + Building a Single Specific Module
819
Differences between dependencyManagement and dependencies in Maven
761
How to force maven update?
152
Maven: best way of linking custom external JAR to my project?
886
What exactly is a Maven Snapshot and why do we need it?
603
IntelliJ inspection gives “Cannot resolve symbol” but still compiles code
745
Dealing with “Xerces hell” in Java/Maven?