When I try to implement Facebook Connect in my Android application, I get the following error.

I reset the key in the Facebook App and still it shows the same error. How can I fix it?

Now copy this key and open this URL, and paste this key in the native Android app, marked with a green border. 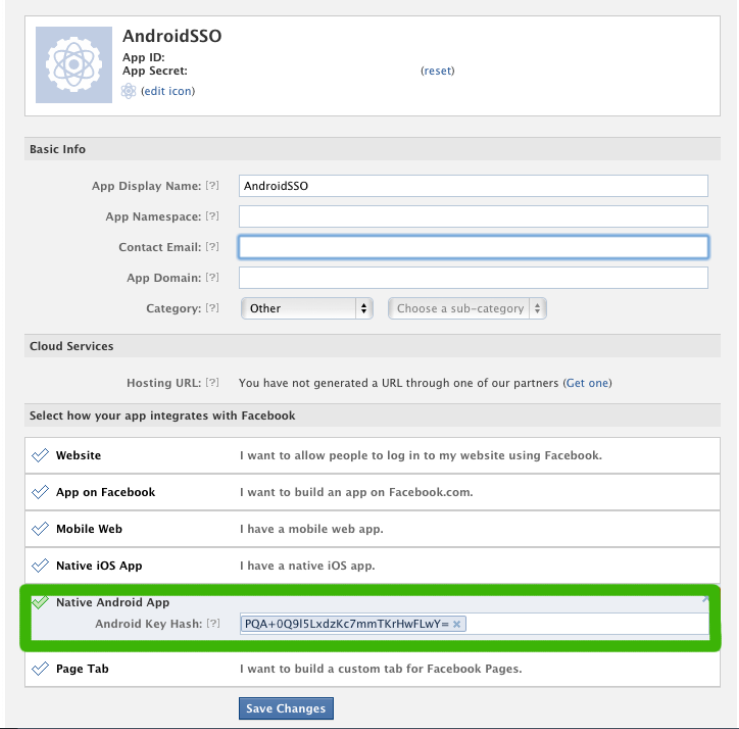 I dont know if your problem is resolved right now but I was having the same problem as you and now I find the complete solution.

You have two enviroments for the development: debug and a signed application, when you use this commands to get your key

But when you sign the app you get a new key because your app is using a new keystore.You can get your "sign app key" using this program. http://www.easyfacebookandroidsdk.com/download/keyhash.zip but you have to sign with the same keystore that you are using in your app.

This key is encrypted by your device so you have we have to let this key be known to Facebook user (in your application which you create in Facebook).

Now you have to copy this key in the native app and then save it. After some minutes, you can get all access..

The error for me was caused by the mismatch between my debugging key when I was testing my app and the release key when I was signing a release version.

If you copy and paste 8Ioc4p/jMXoU9Lezug4nzmZfFUg to the Android Key Hash field in the Facebook application settings it should work. If you get this error again (showing a different key value) when you test your signed release version, copy that additional key into the Hash Field after the original entry, so you have two values in there.

I was surprised that more than one entry was allowed in the Key Hash Field, but it appears it is ok and it's solved the problem for me for both testing and release versions.

Once this is done, you can paste the debug native Android application key to the Facebook settings page of your application.

You actually do not past this key directly, but a Base64 value of this key.

Refer to https://developers.facebook.com/docs/mobile/android/build/#sig which explains you how to generate this.

Please check your application page in Facebook and confirm that both keys are same. I think you won't register your app on Facebook

You can use Facebook application in your application so you use this. In that source code for Facebook integration is there.

If the key is invalid, then you have to create the new Facebook application on the Facebook developers site. It provides you with a new key. Use that key in your Facebook demo.

I have this problem, I solved it by deleting "C:\Users\user_name.android\debug.keystore" and generating a new one with eclipse. Then I change the old hash key from Facebook and it works!

Not the answer you're looking for? Browse other questions tagged android facebook facebook-android-sdk or ask your own question.

4104
How do you close/hide the Android soft keyboard programmatically?
3037
How to stop EditText from gaining focus at Activity startup in Android
6100
What is the difference between "px", "dip", "dp" and "sp"?
2928
Is there a unique Android device ID?
2121
What is 'Context' on Android?
1
Facebook Android native key fail
2
Login Failed: invalid_key: Android Key mismatch
3820
Proper use cases for Android UserManager.isUserAGoat()?
1746
How does Facebook disable the browser's integrated Developer Tools?