I have an application that uses "secure" cookies and want to test it's functionality without needing to set up a complicated SSL enabled development server. Is there any way to do this as simply as I can test non-encrypted requests using ./manage.py runserver?

It's not as simple as the built in development server, but it's not too hard to get something close using stunnel as an SSLifying middleman between your browser and the development server. Stunnel allows you to set up a lightweight server on your machine that accepts connections on a configured port, wraps them with SSL, and passes them along to some other server. We'll use this to open a stunnel port (8443) and pass along any traffic it receives to a Django runserver instance.

First you'll need stunnel which can be downloaded here or may be provided by your platform's package system (e.g.: apt-get install stunnel). I'll be using version 4 of stunnel (e.g.: /usr/bin/stunnel4 on Ubuntu), version 3 will also work, but has different configuration options.

First create a directory in your Django project to hold the necessary configuration files and SSLish stuff.

Next we'll need to create a local certificate and key to be used for the SSL communication. For this we turn to openssl.

Create the certificate that uses this key (this will ask you a bunch of information that will be included in the certficate - just answer with whatever feels good to you):

Now combine these into a single file that stunnel will use for its SSL communication:

Create a config file for stunnel called dev_https with the following contents:

This file tells stunnel what it needs to know. Specifically, you're telling it not to use a pid file, where the certificate file is, what version of SSL to use, that it should run in the foreground, where it should log its output, and that it should accept connection on port 8443 and shuttle them along to port 8001. The last parameter (TIMEOUTclose) tells it to automatically close the connection after 1 second has passed with no activity.

Now pop back up to your Django project directory (the one with manage.py in it):

Here we'll create a script named runserver that will run stunnel and two django development servers (one for normal connections, and one for SSL connections):

Let's break this down, line-by-line:

Make the runscript file we just created executable with:

Now when you want to run your development server just execute ./runserver from your project directory. To try it out, just point your browser to http://localhost:8000 for normal HTTP traffic, and https://localhost:8443 for HTTPS traffic. Note that you're browser will almost definitely complain about the certificate used and require you to add an exception or otherwise explicitly instruct the browser to continue browsing. This is because you created your own certificate and it isn't trusted by the browser to be telling the truth about who it is. This is fine for development, but obviously won't cut it for production.

Unfortunately, on my machine this runserver script doesn't exit out nicely when I hit Ctrl-C. I have to manually kill the processes - anyone have a suggestion to fix that?

Thanks to Michael Gile's post and django-weave's wiki entry for the reference material.

I would recommend using the django-sslserver package.

The current package on PyPI only supports up to Django version 1.5.5 but a patch has been committed via 5d4664c. With this fix the system runs well and is a pretty simple and straightforward solution for testing https connections.

UPDATE: Since I posted my answer the commit above has been merged into the master branch and a new release has been pushed to PyPI. So there shouldn't be any need to specify the 5d4664c commit for that specific fix.

include sslserver in installed aps

now you can run

It has dependencies on Werkzeug (so you get access to the excellent Werkzeug debugger) and pyOpenSSL (only required for ssl mode) so to install run:

Add it to INSTALLED_APPS in your projects settings.py file:

Then you can run the server in ssl mode with:

There is a bunch of extra stuff included in django-extensions that you may find of use so it is worth having a quick flick through the docs.

Signup to https://ngrok.com/. You can use https to test. This might help people who just want to quickly test https.

One way is using ngrok.

First method is preferred if you need to test https url just couple of times. But if your requirement says https is mandatory then it would be better if you follow second method. I faced following issues with @EvanGrim solution

I solved these issues by adding subAltname to ssl certificate. Below is the steps I followed to run a local https server without the above two issues.

I would like to thank @EvanGrim for the solution. And Thanks to @Friek, @Utku and @dr. Sybren. Based on their comments I implemented cleanup function.

It can be done in one line with socat:

, where 8443 is a port to listen for incoming HTTPS connections, server.pem is a self-signed server certificate and localhost:8000 is a debug HTTP server launched as usual.

For those looking for a foregrounded version of the stunnel option for debugging purposes:

stunnel.pem is a certificate generated as in Evan Grimm's top voted answer.

sudo is only necessary for incoming ports (-d [host:]port) under 1024

Handle SSL/TLS with a proxy such as Nginx rather than Django. Nginx can be set up to listen on port 443 and then forward requests to your Django dev server (typically http://127.0.0.1:8000). An Nginx configuration for this might look like the following:

You'll then be able to reach your dev site by going to https://django-dev.localhost in your browser (you will need to bypass your browser's security warning).

you need to add this in views.py

I have very simple solution for this, just follow below steps and you will be able to run your django project/app on https:// secure server.

step.1 install openssl on your system. you can get the executable file for installation at https://slproweb.com/products/Win32OpenSSL.html. I recommended you to install Win64 OpenSSL v1.1.1L (version) it is stable compare to 3.0.0

step.2 after successful installation navigate to C:\Program Files\OpenSSL-Win64\bin in our example. you can navigate to your installed directory where u have installed openssl, here you can find out openssl.exe run it as administrator.

step 4: You will then be prompted to enter applicable Distinguished Name (DN) information, totaling seven fields, as you can see in below screenshot: 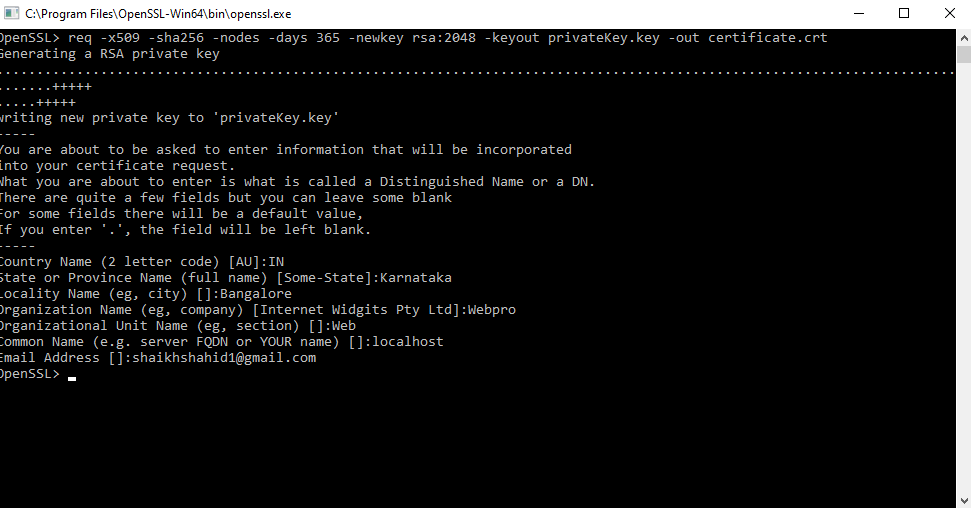 step 5: Once completed, you will find the certificate.crt and privateKey.key files created under the \OpenSSL\bin\ directory, like this 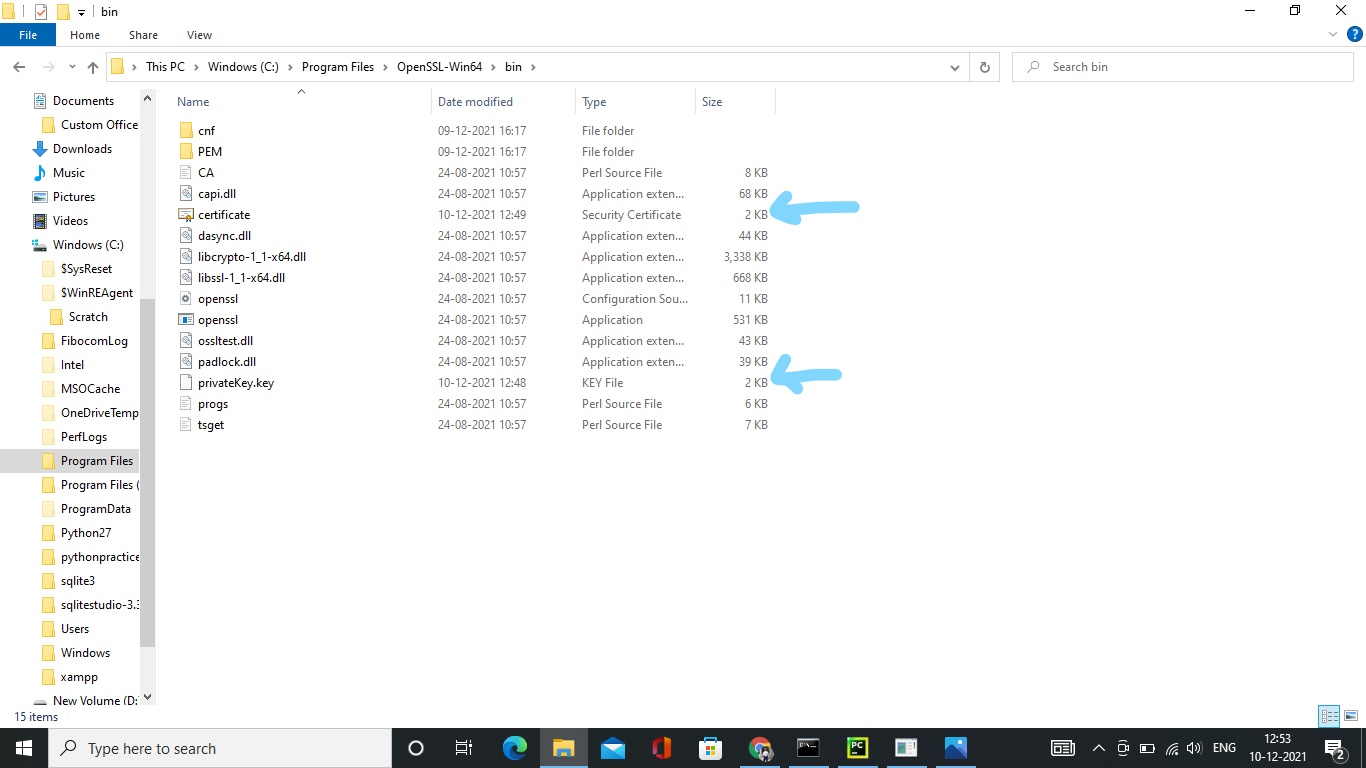 step 6: install django-sslserver in your system.

Congratulations now your django project is running on https.

I hope this will help you, if u face any difficulty feel free to ask.

Tried to add a comment to this answer, where he asks about killing the processes but the code formatting in comments is limited. Here is my modified runserver.bash

Based on Ryabchenko Alexander answer, this is how I do it in Django for local tests:

-1
How to run Django Project on HTTPS locally on windows 10?
5
SESSION_COOKIE_SECURE=True in Django 2.2 redirects Admin login to itself
2
./manage.py runserver with https
3
How to make django site https in windows10
3
Django and React: csrf cookie is not being set in request header
3
You're accessing the development server over HTTPS, but it only supports HTTP. code 400, message Bad request syntax
3
Django Rest Framework can't get CSRF Token by React
0
Simple bash script: use of and operator
2
How can we use Django LiveServerTestCase with Selenium to test https urls
1
Using LetsEncrypt / Certbot with django dev server?
See more linked questions

801
How to combine multiple querysets in Django?
581
Set up a scheduled job?
171
How can I use different certificates on specific connections?
484
How can I get the full/absolute URL (with domain) in Django?
43
How to deploy an HTTPS-only site, with Django/nginx?
397
How do I set GIT_SSL_NO_VERIFY for specific repos only?
0
How to detect secure connection (https) using PHP?
0
django facebook app testing on localhost using django-sslserver with selfsigned certification gets rejected
2
How to set the timeout for Django development server (runserver)?