I understand the purpose of events, especially within the context of creating user interfaces. I think this is the prototype for creating an event:

What do event handlers do, why are they needed, and how do I to create one?

To understand event handlers, you need to understand delegates. In C#, you can think of a delegate as a pointer (or a reference) to a method. This is useful because the pointer can be passed around as a value.

The central concept of a delegate is its signature, or shape. That is (1) the return type and (2) the input arguments. For example, if we create a delegate void MyDelegate(object sender, EventArgs e), it can only point to methods which return void, and take an object and EventArgs. Kind of like a square hole and a square peg. So we say these methods have the same signature, or shape, as the delegate.

So knowing how to create a reference to a method, let's think about the purpose of events: we want to cause some code to be executed when something happens elsewhere in the system - or "handle the event". To do this, we create specific methods for the code we want to be executed. The glue between the event and the methods to be executed are the delegates. The event must internally store a "list" of pointers to the methods to call when the event is raised.* Of course, to be able to call a method, we need to know what arguments to pass to it! We use the delegate as the "contract" between the event and all the specific methods that will be called.

(*This is the key to events in .NET and peels away the "magic" - an event is really, under the covers, just a list of methods of the same "shape". The list is stored where the event lives. When the event is "raised", it's really just "go through this list of methods and call each one, using these values as the parameters". Assigning an event handler is just a prettier, easier way of adding your method to this list of methods to be called).

C# knows two terms, delegate and event. Let's start with the first one.

You can use a delegate to create an reference to a method:

Now that you have this reference to a method, you can call the method via the reference:

So, if you have a TheOtherClass class and it needs to use the myFactory.GetInstance(), this is how the code will look like without delegates (you'll need to let TheOtherClass know about the type of your myFactory):

If you'd use delegates, you don't have to expose the type of my factory:

Thus, you can give a delegate to some other class to use, without exposing your type to them. The only thing you're exposing is the signature of your method (how many parameters you have and such).

Further, a delegate reference can (with some restrictions, see below) reference multiple methods (called MulticastDelegate). This means that when you call the delegate, multiple explicitly-attached methods will be executed. An object reference can always only reference to one object.

The restrictions for a MulticastDelegate are that the (method/delegate) signature should not have any return value (void) and the keywords out and ref is not used in the signature. Obviously, you can't call two methods that return a number and expect them to return the same number. Once the signature complies, the delegate is automatically a MulticastDelegate.

Events are just properties (like the get;set; properties to instance fields) which expose subscription to the delegate from other objects. These properties, however, don't support get;set;. Instead, they support add; remove;

So you can have:

Usage in UI (WinForms,WPF,UWP So on)

So, now we know that a delegate is a reference to a method and that we can have an event to let the world know that they can give us their methods to be referenced from our delegate, and we are a UI button, then: we can ask anyone who is interested in whether I was clicked, to register their method with us (via the event we exposed). We can use all those methods that were given to us and reference them by our delegate. And then, we'll wait and wait.... until a user comes and clicks on that button, then we'll have enough reason to invoke the delegate. And because the delegate references all those methods given to us, all those methods will be invoked. We don't know what those methods do, nor we know which class implements those methods. All we do care about is that someone was interested in us being clicked, and gave us a reference to a method that complied with our desired signature.

That is actually the declaration for an event handler - a method that will get called when an event is fired. To create an event, you'd write something like this:

Whenever Foo fires off MyEvent, then your OnMyEvent handler will be called.

You don't always have to use an instance of EventArgs as the second parameter. If you want to include additional information, you can use a class derived from EventArgs (EventArgs is the base by convention). For example, if you look at some of the events defined on Control in WinForms, or FrameworkElement in WPF, you can see examples of events that pass additional information to the event handlers.

Here is a code example which may help:

Just to add to the existing great answers here - building on the code in the accepted one, which uses a delegate void MyEventHandler(string foo)...

Because the compiler knows the delegate type of the SomethingHappened event, this:

Is totally equivalent to:

And handlers can also be unregistered with -= like this:

For completeness' sake, raising the event can be done like this, only in the class that owns the event:

The thread-local copy of the handler is needed to make sure the invocation is thread-safe - otherwise a thread could go and unregister the last handler for the event immediately after we checked if it was null, and we would have a "fun" NullReferenceException there.

C# 6 introduced a nice short hand for this pattern. It uses the null propagation operator.

My understanding of the events is;

A variable to hold reference to method / methods to be executed. This makes it possible to pass around methods like a variable.

Steps for creating and calling the event:

publisher: where the events happen. Publisher should specify which delegate the class is using and generate necessary arguments, pass those arguments and itself to the delegate.

subscriber: where the response happen. Subscriber should specify methods to respond to events. These methods should take the same type of arguments as the delegate. Subscriber then add this method to publisher's delegate.

I recently made an example of how to use events in c#, and posted it on my blog. I tried to make it as clear as possible, with a very simple example. In case it might help anyone, here it is: http://www.konsfik.com/using-events-in-csharp/

It includes description and source code (with lots of comments), and it mainly focuses on a proper (template - like) usage of events and event handlers.

Some key points are:

I agree with KE50 except that I view the 'event' keyword as an alias for 'ActionCollection' since the event holds a collection of actions to be performed (ie. the delegate).

Great technical answers in the post! I have nothing technically to add to that.

One of the main reasons why new features appear in languages and software in general is marketing or company politics! :-) This must not be under estimated!

I think this applies to certain extend to delegates and events too! i find them useful and add value to the C# language, but on the other hand the Java language decided not to use them! they decided that whatever you are solving with delegates you can already solve with existing features of the language i.e. interfaces e.g.

Now around 2001 Microsoft released the .NET framework and the C# language as a competitor solution to Java, so it was good to have NEW FEATURES that Java doesn't have.

Another thing to know about, in some cases, you have to use the Delegates/Events when you need a low level of coupling !

If you want to use a component in several place in application, you need to make a component with low level of coupling and the specific unconcerned LOGIC must be delegated OUTSIDE of your component ! This ensures that you have a decoupled system and a cleaner code.

In SOLID principle this is the "D", (Dependency inversion principle).

You can make "IoC" with Events, Delegates and DI (Dependency Injection).

Delegates/Events allows us to communicate from the child to the parent without reference ! 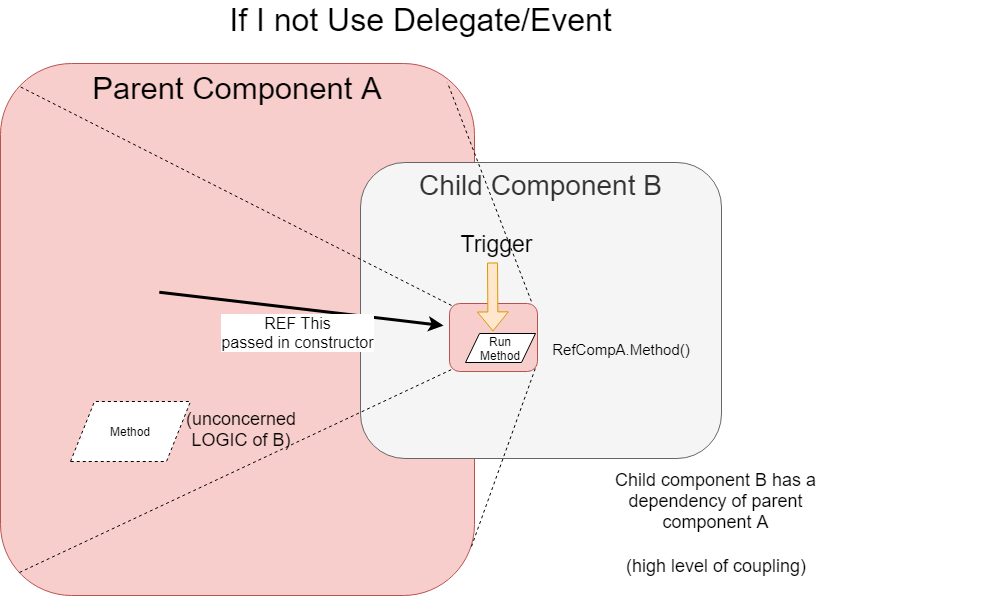 With this approach, I would have to put all the references of all components that use component B ! :( 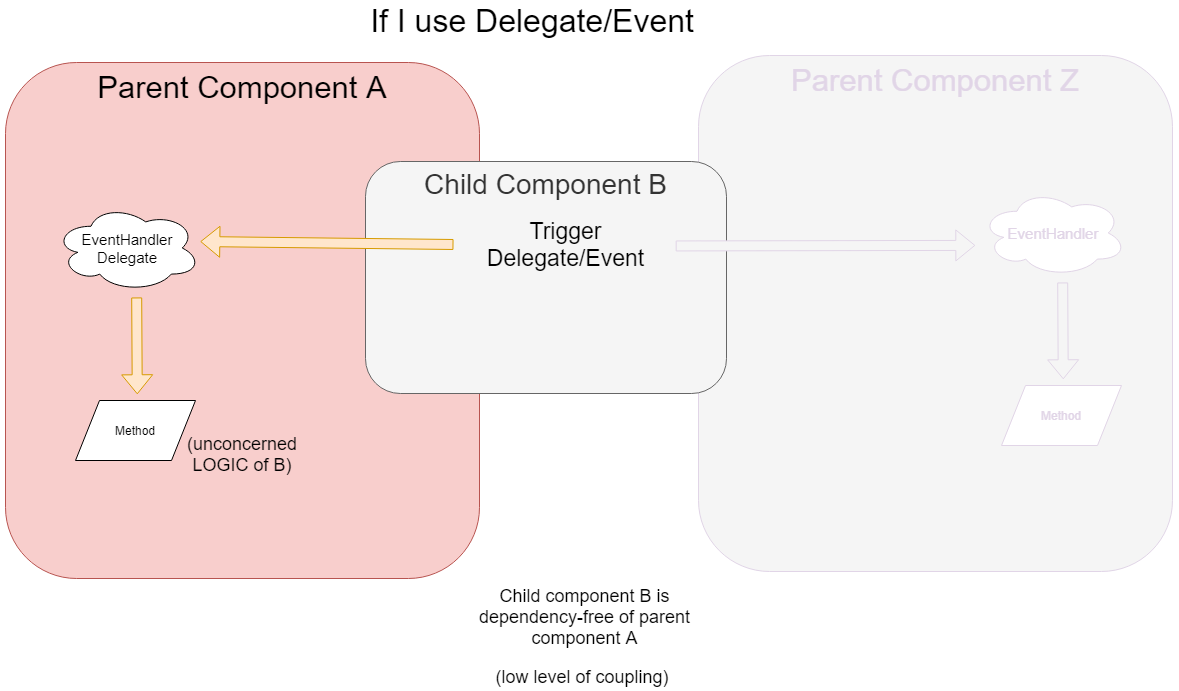 In this diagram above, I use Delegate/Event and the component B doesn't have to known A. (low level of coupling)

And you can use your component B anywhere in your application !

Not the answer you're looking for? Browse other questions tagged c# .net events event-handling or ask your own question.

0
what role event delegates play?
-1
C# documentation about how to add an event handler
-1
Executing a method of an other class in this other class wpf
0
what is the purpose of "this.lblDelete.Click += new System.EventHandler(this.lblDelete_Click); " in InitializeComponent() method in C#?
-3
convert code dealing with event handling from VB.NET to C# dealing with event handling
388
When & why to use delegates?
110
Difference between events and delegates and its respective applications
25
action delegate with zero parameters
13
Why use Events?
23
C# delegate v.s. EventHandler
See more linked questions

7005
What is the difference between String and string in C#?
1513
What is the difference between const and readonly in C#?
397
How to remove all event handlers from an event
2024
How do I create an Excel (.XLS and .XLSX) file in C# without installing Microsoft Office?
1676
Event binding on dynamically created elements?
2238
Difference between decimal, float and double in .NET?
576
jQuery find events handlers registered with an object
1062
jQuery multiple events to trigger the same function
1873
What is a NullReferenceException, and how do I fix it?
1
Why events does not support binding inherited types?