Resource usage of google Go vs Python and Java on Appengine

In other words: Will I benefit from using Go in app engine from a cost perspective? (only taking to account the cost of the appengine resources not development time)

Yes, Go instances have a lower memory than Python and Java (< 10 MB).

Yes, Go instances start faster than Java and Python equivalent because the runtime only needs to read a single executable file for starting an application.

Also even if being atm single threaded, Go instances handle incoming request concurrently using goroutines, meaning that if 1 goroutine is waiting for I/O another one can process an incoming request.

Go program is uploaded as source code and compiled (once) to a binary when deploying a new version of your application using the SDK.

In other words: Will I benefit from using Go in app engine from a cost perspective?

The Go runtime has definitely an edge when it comes to performance / price ratio, however it doesn't affect the pricing of other API quotas as described by Peter answer.

The cost of instances is only part of the cost of your app. I only use the Java runtime right now, so I don't know how much more or less efficient things would be with Python or Go, but I don't imagine it will be orders of magnitude different. I do know that instances are not the only cost you need to consider. Depending on what your app does, you may find API or storage costs are more significant than any minor differences between runtimes. All of the API costs will be the same with whatever runtime you use.

The question is mostly irrelevant.

The minimum memory footprint for a Go app is less than a Python app which is less than a Java app. They all cost the same per-instance, so unless your application performs better with extra heap space, this issue is irrelevant.

Go startup time is less than Python startup time which is less than Java startup time. Unless your application has a particular reason to churn through lots of instance startup/shutdown cycles, this is irrelevant from a cost perspective. On the other hand, if you have an app that is exceptionally bursty in very short time periods, the startup time may be an advantage.

As mentioned by other answers, many costs are identical among all platforms - in particular, datastore operations. To the extent that Go vs Python vs Java will have an effect on the instance-hours bill, it is related to:

All three languages have their virtues and curses. For the most part, you're better off letting other issues dominate - which language do you enjoy working with most?

It's probably more about how you allocate the resources than your language choice. I read that GAE was built the be language-agnostic so there is probably no builtin advantage for any language, but you can get an advantage from choosing the language you are comfortable and motivated with. I use python and what made my deployment much more cost-effective was the upgrade to python 2.7 and you can only make that upgrade if you use the correct subset of 2.6, which is good. So if you choose a language you're comfortable with, it's likely that you will gain an advantage from your ability using the language rather than the combo language + environment itself.

In short, I'd recommend python but that's the only app engine language I tried and that's my choice even though I know Java rather well the code for a project will be much more compact using my favorite language python.

My apps are small to medium sized and they cost like nothing: 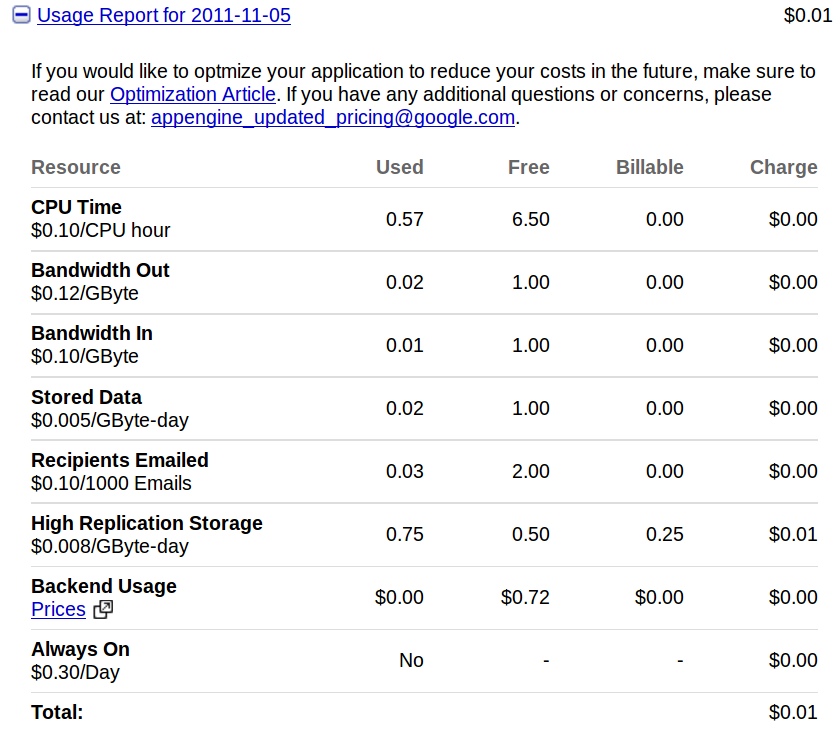 I haven't used Go, but I would strongly suspect it would load and execute instances much faster, and use less memory purely because it is compiled. Anecdotally from the group, I believe that Python is more responsive than Java, at least in instance startup time.

Instance load/startup times are important because when your instance is hit by more requests than it can handle, it spins up another instance. This makes that request take much longer, possibly giving the impression that the site is generally slow. Both Java and Python have to startup their virtual machine/interpreter, so I would expect Go to be an order of magnitude faster here.

There is one other issue - now Python2.7 is available, Go is the only option that is single-threaded (ironically, given that Go is designed as a modern multi-process language). So although Go requests should be handled faster, an instance can only handle requests serially. I'd be very surprised if this limitation last long, though.

Not the answer you're looking for? Browse other questions tagged java python google-app-engine go or ask your own question.

4032
What are the differences between a HashMap and a Hashtable in Java?
1902
Java inner class and static nested class
3398
What is the difference between public, protected, package-private and private in Java?
902
What __init__ and self do in Python?
6
Google AppEngine: how often does a "runtime startup" occur
2271
How do I declare and initialize an array in Java?
1069
What is the difference between canonical name, simple name and class name in Java Class?
264
Which part of throwing an Exception is expensive?
135
Pricing of Google App Engine Flexible env, a $500 lesson