I have the following code in Ruby. I want to convert this code into JavaScript. What is the equivalent code in JS?

ECMAScript 6 (ES6) introduces a new type of literal, namely template literals. They have many features, variable interpolation among others, but most importantly for this question, they can be multiline.

A template literal is delimited by backticks:

(Note: I'm not advocating to use HTML in strings)

Browser support is OK, but you can use transpilers to be more compatible.

Javascript doesn't have a here-document syntax. You can escape the literal newline, however, which comes close:

As the first answer mentions, with ES6/Babel, you can now create multi-line strings simply by using backticks:

Interpolating variables is a popular new feature that comes with back-tick delimited strings:

This just transpiles down to concatenation:

Google's JavaScript style guide recommends to use string concatenation instead of escaping newlines:

Do not do this:

The whitespace at the beginning of each line can't be safely stripped at compile time; whitespace after the slash will result in tricky errors; and while most script engines support this, it is not part of ECMAScript.

Use string concatenation instead:

the pattern text = <<"HERE" This Is A Multiline String HERE is not available in js (I remember using it much in my good old Perl days).

To keep oversight with complex or long multiline strings I sometimes use an array pattern:

or the pattern anonymous already showed (escape newline), which can be an ugly block in your code:

Here's another weird but working 'trick'1:

1 Note: this will be lost after minifying/obfuscating your code

You can have multiline strings in pure JavaScript.

This method is based on the serialization of functions, which is defined to be implementation-dependent. It does work in the most browsers (see below), but there's no guarantee that it will still work in the future, so do not rely on it.

The method has successfully been tested in the following browsers (not mentioned = not tested):

Be careful with your minifier, though. It tends to remove comments. For the YUI compressor, a comment starting with /*! (like the one I used) will be preserved.

I think a real solution would be to use CoffeeScript.

ES6 UPDATE: You could use backtick instead of creating a function with a comment and running toString on the comment. The regex would need to be updated to only strip spaces. You could also have a string prototype method for doing this:

Someone should write this .removeIndentation string method... ;)

I came up with this very jimmy rigged method of a multi lined string. Since converting a function into a string also returns any comments inside the function you can use the comments as your string using a multilined comment /**/. You just have to trim off the ends and you have your string.

I'm surprised I didn't see this, because it works everywhere I've tested it and is very useful for e.g. templates:

Does anybody know of an environment where there is HTML but it doesn't work?

I solved this by outputting a div, making it hidden, and calling the div id by jQuery when I needed it.

Then when I need to get the string, I just use the following jQuery:

Which returns my text on multiple lines. If I call 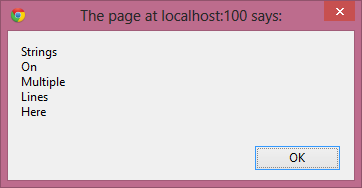 There are multiple ways to achieve this

Performance wise, Slash concatenation (first one) is the fastest.

Refer this test case for more details regarding the performance

With the ES2015, we can take advantage of its Template strings feature. With it, we just need to use back-ticks for creating multi line strings

(but actually can't be considered as multiline string)

Downvoters: This code is supplied for information only.

There's this library that makes it beautiful:

A simple way to print multiline strings in JavaScript is by using template literals(template strings) denoted by backticks (` `). you can also use variables inside a template string-like (` name is ${value} `)

Found a lot of over engineered answers here. The two best answers in my opinion were:

That logs it correctly but it's ugly in the script file if str is nested inside functions / objects etc...:

My really simple answer with regex which logs the str correctly:

Please note that it is not the perfect solution but it works if you are sure that after the new line (\n) at least one space will come (+ means at least one occurrence). It also will work with * (zero or more).

You can be more explicit and use {n,} which means at least n occurrences.

The equivalent in javascript is:

Here's the specification. See browser support at the bottom of this page. Here are some examples too.

This works in IE, Safari, Chrome and Firefox:

to sum up, I have tried 2 approaches listed here in user javascript programming (Opera 11.01):

So I recommend the working approach for Opera user JS users. Unlike what the author was saying:

It doesn't work on firefox or opera; only on IE, chrome and safari.

It DOES work in Opera 11. At least in user JS scripts. Too bad I can't comment on individual answers or upvote the answer, I'd do it immediately. If possible, someone with higher privileges please do it for me.

My extension to https://stackoverflow.com/a/15558082/80404. It expects comment in a form /*! any multiline comment */ where symbol ! is used to prevent removing by minification (at least for YUI compressor)

Updated for 2015: it's six years later now: most people use a module loader, and the main module systems each have ways of loading templates. It's not inline, but the most common type of multiline string are templates, and templates should generally be kept out of JS anyway.

Using require.js 'text' plugin, with a multiline template in template.html

Browserify uses a 'brfs' module to load text files. This will actually build your template into your bundled HTML.

If you're willing to use the escaped newlines, they can be used nicely. It looks like a document with a page border.

The ES6 way of doing it would be by using template literals:

You can use TypeScript (JavaScript SuperSet), it supports multiline strings, and transpiles back down to pure JavaScript without overhead:

If you'd want to accomplish the same with plain JavaScript:

If you have a lot of legacy code, you can also use the plain JavaScript variant in TypeScript (for cleanup purposes):

and you can use the multiline-string object from the plain JavaScript variant, where you put the templates into another file (which you can merge in the bundle).

You can try TypeScript at
http://www.typescriptlang.org/Playground

ES6 allows you to use a backtick to specify a string on multiple lines. It's called a Template Literal. Like this:

Using the backtick works in NodeJS, and it's supported by Chrome, Firefox, Edge, Safari, and Opera.

Also do note that, when extending string over multiple lines using forward backslash at end of each line, any extra characters (mostly spaces, tabs and comments added by mistake) after forward backslash will cause unexpected character error, which i took an hour to find out

Please for the love of the internet use string concatenation and opt not to use ES6 solutions for this. ES6 is NOT supported all across the board, much like CSS3 and certain browsers being slow to adapt to the CSS3 movement. Use plain ol' JavaScript, your end users will thank you.

var str = "This world is neither flat nor round. "+ "Once was lost will be found";

You can use tagged templates to make sure you get the desired output.

40
What's the cleanest way to write a multiline string in JavaScript?
16
JavaScript Multiline String
8
Defining a long string with javascript
9
What is the best way to have long string literals in Javascript?
3
Why can't I store multi line values into a JavaScript literal?
5
Custom placeholder inside element <td> not showing
0
How to handle multiple line JavaScript string?
2
Triple Quotation Marks in Javascript
6
Is there a clean way to write multiline statements in JavaScript?
1
Set a string of HTML equal to a variable in javascript
See more linked questions