How do I run two commands in one line in Windows CMD?

I want to run two commands in a Windows CMD console.

How is it done on Windows?

Like this on all Microsoft OSes since 2000, and still good today:

If you want the second command to execute only if the first exited successfully:

The single ampersand (&) syntax to execute multiple commands on one line goes back to Windows XP, Windows 2000, and some earlier NT versions. (4.0 at least, according to one commenter here.)

There are quite a few other points about this that you'll find scrolling down this page.

Historical data follows, for those who may find it educational.

Prior to that, the && syntax was only a feature of the shell replacement 4DOS before that feature was added to the Microsoft command interpreter.

In MS-DOS 5.0 and later, through some earlier Windows and NT versions of the command interpreter, the (undocumented) command separator was character 20 (Ctrl+T) which I'll represent with ^T here.

You can use the special characters listed in the following table to pass multiple commands.

You can use & to run commands one after another. Example: c:\dir & vim myFile.txt

If you want to create a cmd shortcut (for example on your desktop) add /k parameter (/k means keep, /c will close window):

You can use call to overcome the problem of environment variables being evaluated too soon - e.g.

A number of processing symbols can be used when running several commands on the same line, and may lead to processing redirection in some cases, altering output in other case, or just fail. One important case is placing on the same line commands that manipulate variables.

This command execute command and open Output.txt file in a single command

So, I was trying to enable the specific task of running RegAsm (register assembly) from a context menu. The issue I had was that the result would flash up and go away before I could read it. So I tried piping to Pause, which does not work when the command fails (as mentioned here Pause command not working in .bat script and here Batch file command PAUSE does not work). So I tried cmd /k but that leaves the window open for more commands (I just want to read the result). So I added a pause followed by exit to the chain, resulting in the following:

This works like a charm -- RegAsm runs on the file and shows its results, then a "Press any key to continue..." prompt is shown, then the command prompt window closes when a key is pressed.

P.S. For others who might be interested, you can use the following .reg file entries to add a dllfile association to .dll files and then a RegAsm command extension to that (notice the escaped quotes and backslashes):

Now I have a nice right-click menu to register an assembly.

Well, you have two options: Piping, or just &:

Piping (|) is more for taking the output of one command, and putting it into another. And (&) is just saying run this, and that.

In order to execute two commands at the same time, you must put an & (ampersand) symbol between the two commands. Like so:

I try to have two pings in the same window, and it is a serial command on the same line. After finishing the first, run the second command.

The solution was to combine with start /b on a Windows 7 command prompt.

Start as usual, without /b, and launch in a separate window.

The command used to launch in the same line is:

Any way, if you wish to parse the output, I don't recommend to use this. I noticed the output is scrambled between the output of the commands.

Use & symbol in windows to use command in one line

The piping has some issue, but it is not critical as long as people know how it works.

One more example: For example, when we use the gulp build system, instead of

We can do that with one line:

With windows 10 you can also use scriptrunner:

it allows you to start few commands on one line you want you can run them consecutive or without waiting each other, you can put timeouts and rollback on error.

In windows, I used all the above solutions &, && but nothing worked Finally ';' symbol worked for me

Try to create a .bat ot .cmd file with those lines using doskey key and $T which is equivalent to & to do several command line in just one line : 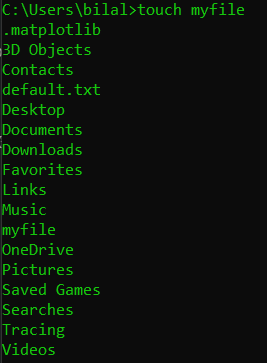 But as mentioned previously by others, it is really advised to use & operator to do many command line in one line from CMD prompt.

When you try to use or manipulate variables in one line beware of their content! E.g. a variable like the following

&& will execute command 2 when command 1 is complete providing it didn't fail.

It's simple: just differentiate them with && signs. Example:

"Goodbye World" will be printed after "Hello World".

Not the answer you're looking for? Browse other questions tagged windows batch-file command-line cmd or ask your own question.

92
How to execute multiple commands in a single line
1
Compile and run at the same time with a single line command in windows
1
Multiple commands cmd in a single line of for /f
-3
check all files in directory in windows script
1
PHP exec() multiple commands that are not separate to each other
0
Problem using mysqldump and gzip on Windows using batch file
1342
How to use SSH to run a local shell script on a remote machine?
252
How can I auto-elevate my batch file, so that it requests from UAC administrator rights if required?
111
Visual Studio: Multiple post-build commands?
104
Delete all files of specific type (extension) recursively down a directory using a batch file
See more linked questions

1241
How can I develop for iPhone using a Windows development machine?
3012
How can you find out which process is listening on a TCP or UDP port on Windows?
849
Windows batch files: .bat vs .cmd?
2667
Is there an equivalent of 'which' on the Windows command line?
585
How can I create an empty file at the command line in Windows?
2182
How do I set a variable to the output of a command in Bash?
2689
How do I install pip on Windows?
3113
How do I copy a folder from remote to local using scp?
2534
How do I import an SQL file using the command line in MySQL?