What would be some useful examples?

The difference between the loosely == equal operator and the strict === identical operator is exactly explained in the manual:

If you are using the == operator, or any other comparison operator which uses loosely comparison such as !=, <> or ==, you always have to look at the context to see what, where and why something gets converted to understand what is going on.

If you are using the === operator, or any other comparison operator which uses strict comparison such as !== or ===, then you can always be sure that the types won't magically change, because there will be no converting going on. So with strict comparison the type and value have to be the same, not only the value.

The operator == casts between two different types if they are different, while the === operator performs a 'typesafe comparison'. That means that it will only return true if both operands have the same type and the same value.

Warning: two instances of the same class with equivalent members do NOT match the === operator. Example: 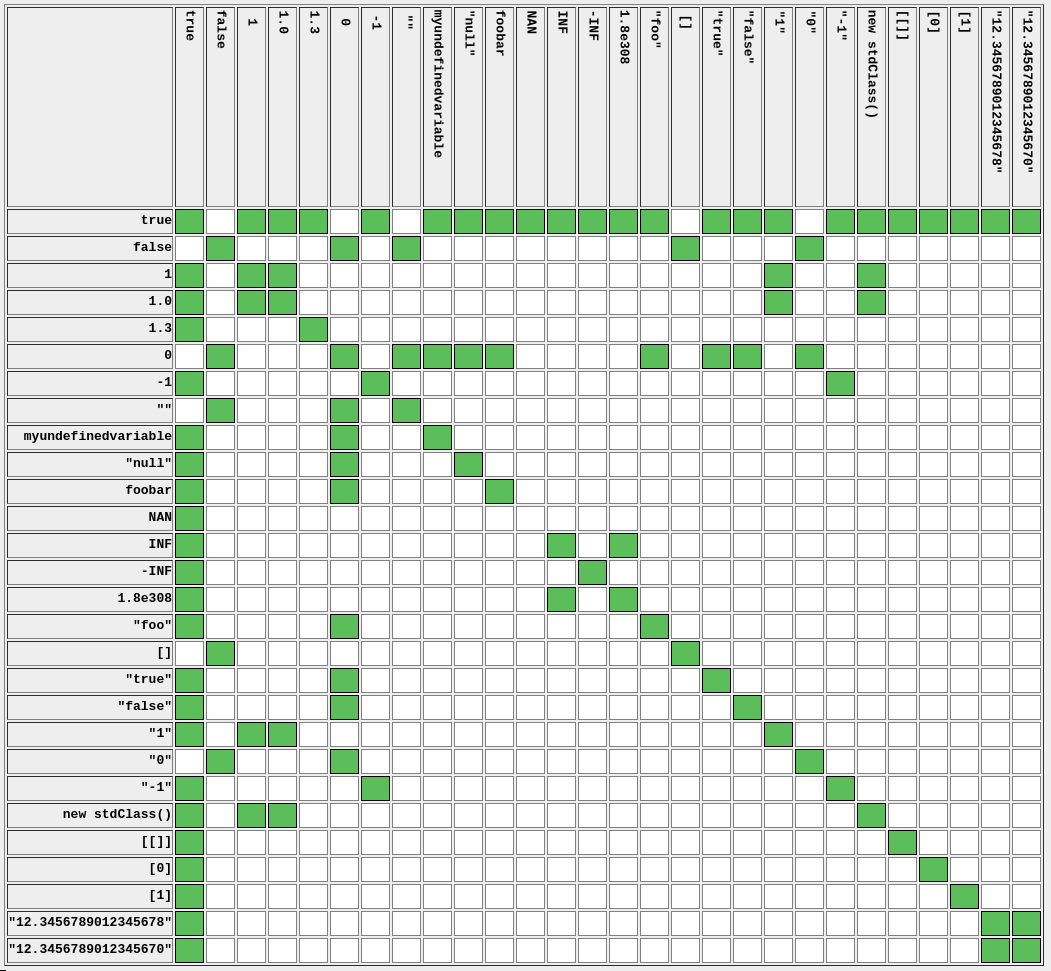 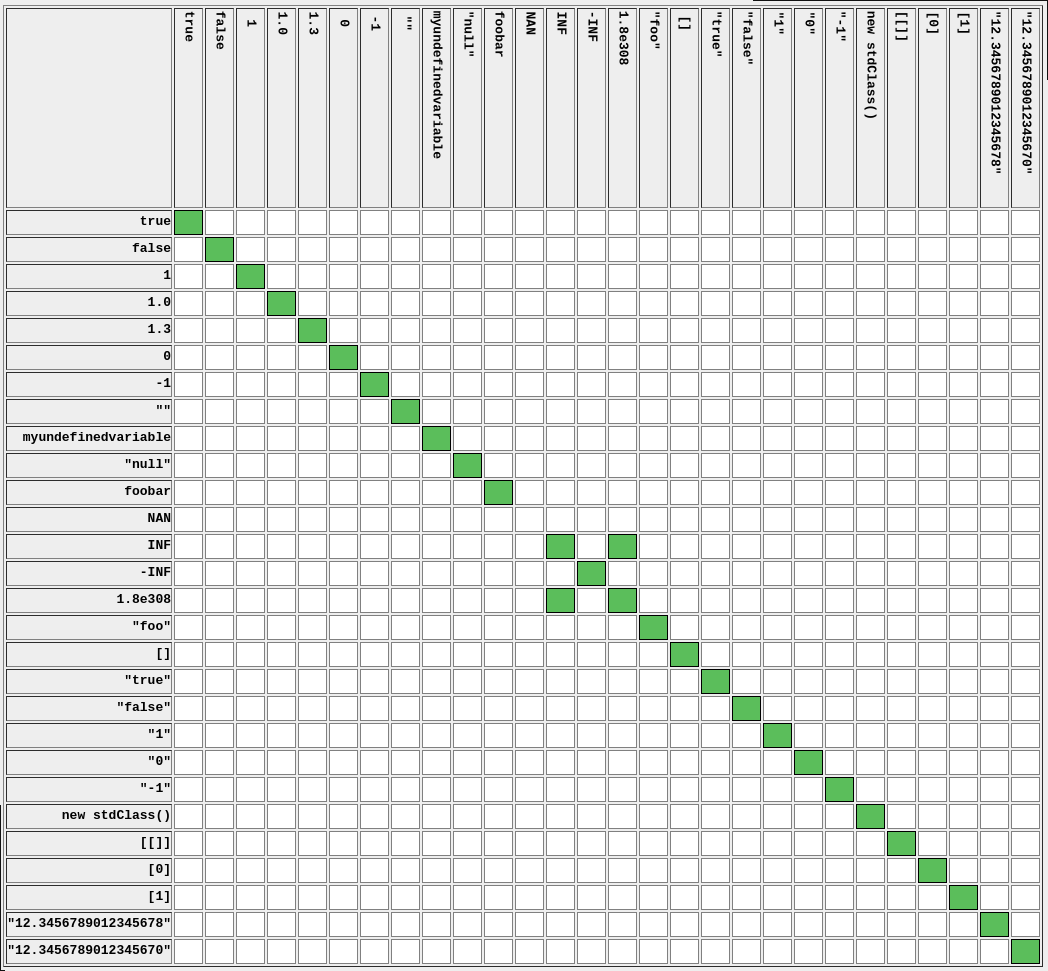 Source code to create these images:

Those who wish to keep their sanity, read no further because none of this will make any sense, except to say that this is how the insanity-fractal, of PHP was designed.

If you are using PHP, Thou shalt not use the double equals operator because if you use triple equals, the only edge cases to worry about are NAN and numbers so close to their datatype's maximum value, that they are cast to infinity. With double equals, anything can be surprise == to anything or, or can be surprise casted against your will and != to something of which it should obviously be equal.

Anywhere you use == in PHP is a bad code smell because of the 85 bugs in it exposed by implicit casting rules that seem designed by millions of programmers programming by brownian motion.

In regards to JavaScript:

The === operator works the same as the == operator, but it requires that its operands have not only the same value, but also the same data type.

An addition to the other answers concerning object comparison:

== compares objects using the name of the object and their values. If two objects are of the same type and have the same member values, $a == $b yields true.

=== compares the internal object id of the objects. Even if the members are equal, $a !== $b if they are not exactly the same object.

It's all about data types. Take a BOOL (true or false) for example:

The == does not care about the data types when comparing: So if you had a variable that is 1 (which could also be true):

And then compare with the ==:

But $var does not actually equal true, does it? It has the int value of 1 instead, which in turn, is equal to true.

With ===, the data types are checked to make sure the two variables/objects/whatever are using the same type.

So if I did

Why would you need this?

Simple - let's take a look at one of PHP's functions: array_search():

So if you did:

So, do you see how this could be an issue now?

Most people don't use == false when checking if a function returns false. Instead, they use the !. But actually, this is exactly the same as using ==false, so if you did:

So for things like that, you would use the === instead, so that the data type is checked.

In most programming languages, the comparison operator (==) checks, on the one hand, the data type and on the other hand the content of the variable for equality. The standard comparison operator (==) in PHP behaves differently. This tries to convert both variables into the same data type before the comparison and only then checks whether the content of these variables is the same. The following results are obtained:

This operator also checks the datatype of the variable and returns (bool)true only if both variables have the same content and the same datatype. The following would therefore be correct:

Read more in What is the difference between == and === in PHP

You would use === to test whether a function or variable is false rather than just equating to false (zero or an empty string).

which is not what you want here.

Variables have a type and a value.

When you use these variables (in PHP), sometimes you don't have the good type. For example, if you do

This is useful, for example, when you have a function that can return false (on error) and 0 (result) :

This code is wrong as if myFunction() returns 0, it is casted to false and you seem to have an error. The correct code is :

because the test is that the return value "is a boolean and is false" and not "can be casted to false".

All of the answers so far ignore a dangerous problem with ===. It has been noted in passing, but not stressed, that integer and double are different types, so the following code:

Note that this is NOT a case of a "rounding error". The two numbers are exactly equal down to the last bit, but they have different types.

This is a nasty problem because a program using === can run happily for years if all of the numbers are small enough (where "small enough" depends on the hardware and OS you are running on). However, if by chance, an integer happens to be large enough to be converted to a double, its type is changed "forever" even though a subsequent operation, or many operations, might bring it back to a small integer in value. And, it gets worse. It can spread - double-ness infection can be passed along to anything it touches, one calculation at a time.

In the real world, this is likely to be a problem in programs that handle dates beyond the year 2038, for example. At this time, UNIX timestamps (number of seconds since 1970-01-01 00:00:00 UTC) will require more than 32-bits, so their representation will "magically" switch to double on some systems. Therefore, if you calculate the difference between two times you might end up with a couple of seconds, but as a double, rather than the integer result that occurs in the year 2017.

I think this is much worse than conversions between strings and numbers because it is subtle. I find it easy to keep track of what is a string and what is a number, but keeping track of the number of bits in a number is beyond me.

So, in the above answers there are some nice tables, but no distinction between 1 (as an integer) and 1 (subtle double) and 1.0 (obvious double). Also, advice that you should always use === and never == is not great because === will sometimes fail where == works properly. Also, JavaScript is not equivalent in this regard because it has only one number type (internally it may have different bit-wise representations, but it does not cause problems for ===).

My advice - use neither. You need to write your own comparison function to really fix this mess.

Difference between == (equal) and === (identical equal)

There are two differences between == and === in PHP arrays and objects that nobody mentioned: two arrays with different key sorts, and objects.

If you have two arrays with their keys sorted differently, but having equal key-value maps, they are strictly different (i.e. using ===). That might lead to problems, if you key-sort an array, and try to compare the sorted array with the original one.

Keep in mind, the main rule is that two different objects are never strict-equal. Look at the following example:

Note: Assigning an object to another variable does not create a copy - rather, it creates a reference to the same object. See here.

Note: As of PHP7, anonymous classes was introduced. There is no difference between a new class {} and a new stdClass() in the tests above.