What character to use to put an item at the end of an alphabetic list?

I often prepend '_' to the item I want in first position.
Is there some sort of magical character I could use to put an item at the end of the list?

Something more elegant than "z_item".

The Special lead-in Character that will put your folder at the end of the list without having to resort to using the "z" combo: U+E83A: Private Use. In fact, I believe any of the Private Use characters will work. () Just copy and paste the character between the brackets.

I found this thread while wanting folders that sort after Z in Finder on Mac OSX. After several false paths and trial and error, here's what I found:

Characters that sort after Z in Finder (in sort-order)

These are characters others here and in other places on the web, mentioned sort after Z, but that I found DO NOT sort at the end, at least when sorting by name in Finder on Mac:

Based on code page 437, here is a list of characters that come after z. Note they are listed in sort order. Omega is probably the most appropriate for this use case, because it is the last letter of the Greek alphabet.

For someone or something using your folder structure, accessing the folder would be very confusing (and you can see it from the comments like this to the top answer).

So I created a folder with this at the beginning of the name on my Sharepoint drive and now it's there and I can't access it or delete it. :| – Rather Notsay Jun 28 '16 at 21:05

Of course, you can print them, but why make the things so unnecessarily complex? If you want to stay on the safe side, I would suggest using standard characters. Which is the last one depends on your File manager. So here is some code that creates a bunch of folders with all the printables strings in Python so you can test your file manager.

Once you have sorted by name you can get your answer.

using standard characters after z up to my knowledge there is only zz and so on. 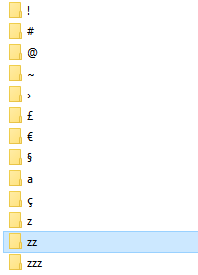 So using zzNameOfTheFolder is an easy and safe way to do to that. So even if it's not nice I would recommend it. 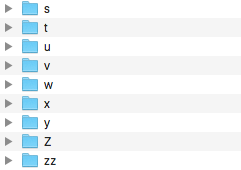 The hashtag # is the last character. But if you want some more compatibility with other file managers I would use ZZ.

Something more elegant than "z_item"?

I guess this depends on your own concept of elegance and I think StackOverflow should diffuse best and safest practices, not the most elegant. However, in many cases, symmetry can help. What about these safe perhaps more elegant solutions:

Despite being years later I wanted to contribute as none of the previously provided answers worked for me. For reference I'm running win7 ultimate SP1.

The solution I landed on resulted from noticing that any files I made for use with Japanese speaking contacts ended at the end of the file list. Apparently Japanese characters don't count as non-alphanumeric similar to hashmark, hyphen, underscore (which place files at the beginning of the list), but also come after English characters.

For my own use I ended up using the 末 character, which roughly means "end" so it makes sense to Japanese readers and is still different enough from English to not become confusing.

Alternatively I would use 口 or 一 for something more stylistically apparent. It's also worth noting that the shorthand "maru" character ○ does not work and sorts along with other non-alphabet characters at the head of the list.

For the novice user (like me) who might have found this question and these answers by accident, here's a simple explanation of how to type these characters. The first is literally a space created by holding the "Alt" key & typing "0160" on your number pad and the second is the "Alt & 250" combination  (Note: A 10-key number pad is best. If you don't have one on your keyboard, see if you can figure out how to use the alternate number keypad. This is almost always different than the 1-0 keys at the top of your keyboard. Look for tiny numbers printed on the edges of your keyboard -usually the "M" "J" L" "I" "O" "P" & 7-0 keys). Or, of course, you can copy and paste the characters in the quotations above (not as easy if you frequently use them as I do).

Here's a short list of special characters to both prioritize your folders or have them appear at the end of a folder list as well as some other folder-friendly characters. Enjoy (~Peter II)

׃    Last but not least, this alt key (1475) is Hebrew Punctuation Sof Pasuq -This is a great character to use when you can be used in place of a colon)

no one mentioned ٴ. This is an Arabic character and sorts below z. Because it's very small, it doesn't annoy.

Most answers here suggest a non-standard character, which will sooner or later cause issues with various systems.

One answer here, which in my opinion is the best, out of all existing to the moment, is to use the last standard character available on your system. For most of us, that's just z. This solution is already suggested by the question and it is indeed not very elegant.

My elegant solution is to use a thesaurus to come up with alternative folder names that sort accordingly. Want your Archives folder to be last, rather than first, maybe Museum will do it, or perhaps Smithsonian, otherwise Zipped works for sure.

Of course, this solution involves a bit of extra work, but it is elegant, it expands your vocabulary, and it might bring you a bit of joy in your work.

Edit: Using unicode, ￭ (\uffed) might also be a possibility, unless you are writing a lot in Linear-B...

(Works with czech sorting in Windows explorer and Total commander.)

edit: Windows 7 and later sort the hyphen - as if the hyphen wasn't there.

For web and SQL purposes, pre-pending CHAR(127) forces text to the bottom and adds no visible character. Works at least for our use of SQL and the jQuery datatables plugin.

Another approach is to use a right to left character, for example an Aramaic letter, so that the sorting character appears at the end rather than the front. For example, I've chosen Zayin https://graphemica.com/𐡆

is rendered by the text engine as:

With the word now sorted below a folder named 'z'.

The full unicode details are:

Note: I've tested this on MacOS, not every text renderer correctly handles right to left languages.

Those that find that most of the codes given here produce different characters than what is described, you probably have  EnableHexNumpad    enabled in  HKCU \ Control Panel \ Input Method... this is by and large a  good  thing, but you do have to convert the codes to hex and precede them with '+' sign (on the num keypad), eg. for the colon at Alt+1475, use the hex equivalent of Alt+5C3 ( hit  Alt   with the left hand and hold it down, then with the right hand hit the keypad  +  … then  5  , C  , and  3  … then let go of  Alt   ).

And, speaking of colons, there's another (smaller) good colon at Alt+1361 hex, which would be Alt+4961 without HexNumpad if  it works that way.

Not the answer you're looking for? Browse other questions tagged windows linux filesystems alphabetical-sort or ask your own question.

5
Who is the greatest among all strings?
0
Minimum letter for string sorting