I want to draw an arrow using the canvas tag, javascript. I've made it using the quadratic function, but I'm having problems to calculate the angle of rotation of the arrow...

Anyone have a clue on this?

As simple as I can get it. You'll have to prepend context.beginPath() and append context.stroke() yourself:

Ok, so the first answer on this page helped me greatly when I was trying to figure this problem out myself, although as someone else already stated, if you have a line width greater than 1px you get funny shapes. The fix that someone else suggested almost worked, but I still had some issues when trying to go for a thicker width arrow. After several hours of playing around with it I was able to combine the above solution with some of my own tinkering to come up with the following code that will draw an arrow at whatever thickness you desire without distorting the arrow shape.

This is now the code that I am using in my program. What I found to be the key with eliminating the distortion issue was continuing the stroke from the tip of the arrow to one side point, to the other side point, back to the tip, and back over to the first side point, then doing a fill. This corrected the shape of the arrow.

And here is a demonstration of it to draw arrows at the start and at the end of a line.

Typescript version, with the fixed arrow tip when line width >> 1 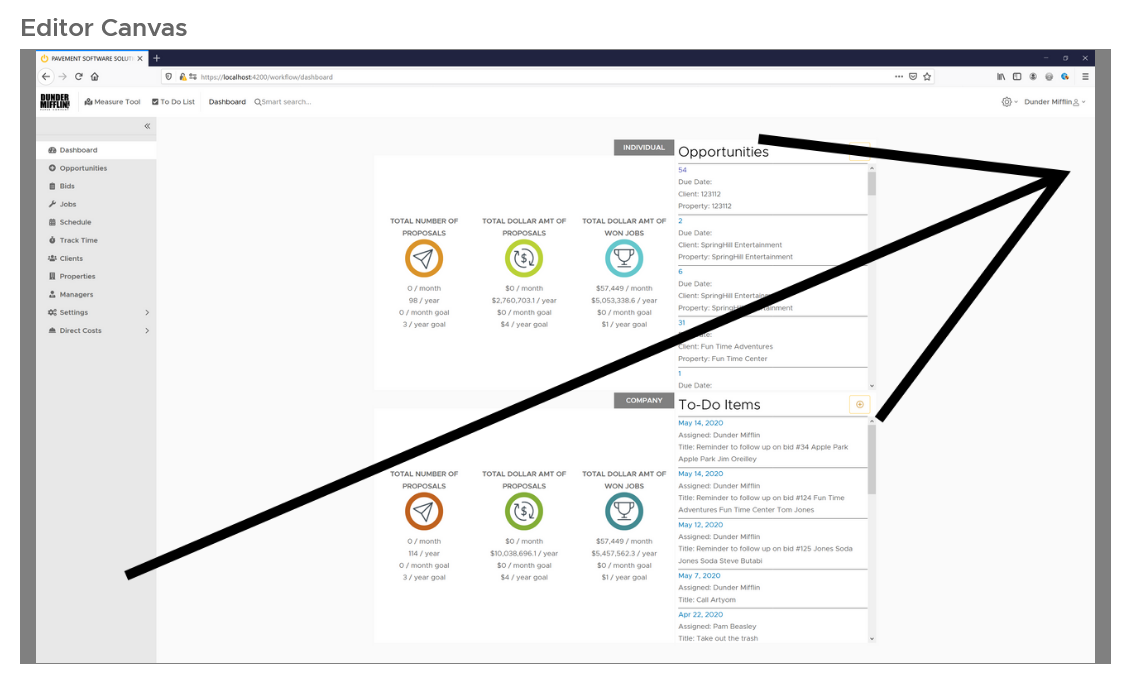 Given a size and the starting position, following code will draw the arrow for you.

This code is similar to Titus Cieslewski's solution, maybe the arrow is a bit nicer:

this works well with lineWidth > 1. It can come in handy when drawing x and y axis

Hello and thank you very much for your suggestions.

May I suggest you drop the cumbersome atan ? You may as well use linear algebra to add or subtract angles:

You can push your matrix, rotate it, draw your arrow and then pop the matrix.

I've been struggeling with this for quite some time now. I needed to to this in both javascript and c#. For javascript i found a nice library jCanvas.

My main problem was drawing nicely looking arrow heads, which jCanvas does perfectly. For my c# project i reverse engineered the jCanvas code.

Hopefully this helps somebody

Here is the working solution

4
Create equilateral triangle in the middle of canvas?
3
Html 5 Canvas complete arrowhead
2
How to draw arrow in HTML table across cells?
1
Javascript canvas arrow - arrowhead not pointing at line end
1
Exclude edges from participating in the layout
1
Paint arrow with QML
-1
How to draw an arrowhead with proper coordinates in the canvas
1
How to make slanted CSS arrow pointing to a div
0
Graphically display a path/route on a browser
0
Calculate the points of block arrow in HTML5 canvas
See more linked questions

1289
How can I get jQuery to perform a synchronous, rather than asynchronous, Ajax request?
1448
What is the best way to add options to a select from a JavaScript object with jQuery?
1582
How do you access the matched groups in a JavaScript regular expression?
1717
Where should I put <script> tags in HTML markup?
1668
How do you use a variable in a regular expression?
1818
Detecting an "invalid date" Date instance in JavaScript
2194
How to decide when to use Node.js?
1907
Find object by id in an array of JavaScript objects
2945
Why does my JavaScript code receive a "No 'Access-Control-Allow-Origin' header is present on the requested resource" error, while Postman does not?