How to get rid of spaces in gridview

This thing has been doing my head in for a little while now and I can't seem to be able to solve it.

I've got a grid view, in which I display a few bitmaps. I add a padding of 5dp on all image sides when filling up my image view via the adapter (iv.setPadding(5, 5, 5, 5);), but somehow, there's more space being added to the top and bottom on each item on my gridview.

I know this has already been asked a few times here, and some of them even have accepted answers, however, when I try to sue the answers as described on the URL's above, I still keep getting the same extra spaces on top and bottom.

Is there any other way of doing this nowadays?

Here's some of my code:

I have tried adding the following to my listselector attribute in main.xml

Here's how it looks like with the extra spaces on top and bottom (the ones on the sides are the ones I'm adding as described above): 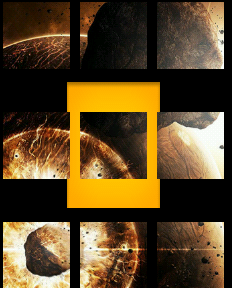 Any other ideas as to how to get those bloody spaces removed so my grid view has the same spacing?

If not otherwise set, a GridView will override the layout you're imagining it should produce by stretching things in various ways. If you want to have full control of the layout by defining the column widths and the size of the grid items, then you have to make sure to set the GridView's stretchMode property to "none".

Also, you are filling the parent with your GridView width. I think you should be wrapping the content for the width unless you want extra filling added. Where are you adding the 5dp padding? Around each bitmap or around the edge of the gridview? I don't see it.

You should probably be filling the height though. (in the following some of the width and heights can probably be replaced by "wrap_content")

Also, not sure if you need column spacing and width, which would be something like (or a dp instead of wrap_content) - you may not need these in your GridView - I'm not sure:

For me it solved the problem by setting imageview.setAdjustViewBounds(true); in my Adapter class.

It seems that my square images were automatically resized in width but Gridview still used the original hight. By adjusting bounds, both dimensions were resized automatically and all items were displayed smoothly even with default stretchmode enabled.

I found an easy way to walk around this. Just add android:layout_marginRight in your GridView.

step 2: in onMeasure return your calculated width and height

Not the answer you're looking for? Browse other questions tagged android android-gridview or ask your own question.

35
Why are there extra pixels around my Android GridView?
15
Removing the extra padding in a GridView in android
17
Delete border space around GridView
6
How to manage GridView

2595
How to save an activity state using save instance state?
1993
How do I center text horizontally and vertically in a TextView?
1831
How to get screen dimensions as pixels in Android
3759
Close/hide android soft keyboard
5
Android GridView 3 x 6 Image Cropping
2363
How to fix 'android.os.NetworkOnMainThreadException'?
14
How do I play an audio file in Android?
1
How to add ad-mob (Advertisement banner) Top OR Bottom of the Imageview?
927
How to add dividers and spaces between items in RecyclerView?