I'm doing some research with the MIPS architecture and was wondering how operating systems are implemented with the limited instructions and memory protection that mips offers. I'm specifically wondering about how an operating system would prevent certain addresses ranges from being executed. For example, how could an operating system limit PC to operate in a particular range? In other words, prevent something such as executing from dynamically allocated memory?

The first thing that came to mind is with TLBs, but TLBs only offer memory write protection (and not execute).

I don't quite see how it could be handled by the OS either, because that would imply that every instruction would result in an exception and then MANY cycles would be burned just checking to see if PC was in a sane address range.

If anyone knows, how is it typically done? Is it handled somehow by the hardware during initialization (e.g. It's given an address range and an exception is hit if its out of range?)

Most of protection checks are done in hardware, by the CPU itself, and do not need much involvement from the OS side.

The OS sets up some special tables (page tables or segment descriptors or some such) where memory ranges have associated read, write, execute and user/kernel permissions that the CPU then caches internally.

The CPU then on every instruction checks whether or not the memory accesses comply with the OS-established permissions and if everything's OK, carries on. If there's an attempt to violate those permissions the CPU raises an exception (a form of an interrupt similar to those from external to the CPU I/O devices) that the OS handles. In most cases the OS simply terminates the offending application when it gets such an exception.

In some other cases it tries to handle them and make the seemingly broken code work. One of these cases is support for virtual, on-disk memory. The OS marks a region as unpresent/inaccessible when it's not backed up by physical memory and it's data is somewhere on the disk. When the app tries to use that region, the OS catches an exception from the instruction that tries to access this memory region, backs the region with physical memory, fills it in with data from the disk, marks it as present/accessible and restarts the instruction that's caused the exception. Whenever the OS is low on memory, it can offload data from certain ranges to the disk, mark those ranges as unpresent/inaccessible again and reclaim the memory from those regions for other purposes.

There may also be specific hard-coded by the CPU memory ranges inaccessible to software running outside of the OS kernel and the CPU can easily make a check here as well.

This seems to be the case for MIPS (from "Application Note 235 - Migrating from MIPS to ARM"):

3.4.2 Memory protection MIPS offers memory protection only to the extent described earlier i.e. addresses in the upper 2GB of the address space are not permitted when in user mode. No finer-grained protection regime is possible. 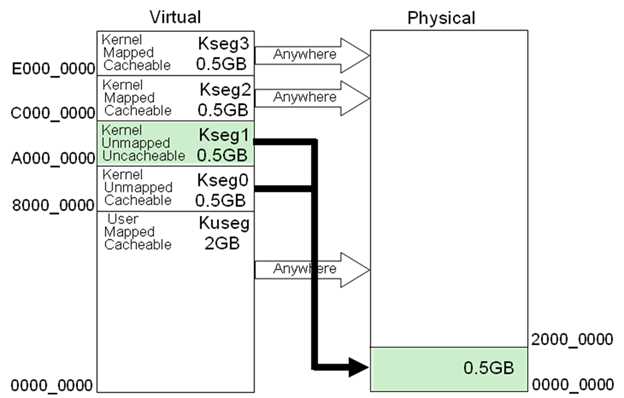 If a particular version of the MIPS CPU doesn't have any more fine-grained protection checks, they can only be emulated by the OS and at a significant cost. The OS would need to execute code instruction by instruction or translate it into almost equivalent code with inserted address and access checks and execute that instead of the original code.

This is indeed done with TLBs. No Execute Bits (NX bits) became popular only a few years ago, so older MIPS processors do not support it. The latest version of the MIPS architecture (Release 3) and the SmartMIPS Application-Specific Extension support it as an optional feature under the name of XI (Execute Inhibit).

If you have a chip without this feature you are out of luck. Like Alex already said, there is no simple way to emulate this feature.

836
How can I measure the actual memory usage of an application or process?
827
How do I discover memory usage of my application in Android?
3619
How can I create a memory leak in Java?
0
MIPS pipeline cycles
0
Accessing code segment memory using SW and LW in MIPS
9
Purpose of address-spaced identifiers(ASIDs)
0
MIPS assembly loading and storing memory address
1
MIPS loading values from address
1
MIPS location of registers