How does git store files?

I just started learning git and to do so I started reading the Git Community Book, and in this book they say that SVN and CVS store the difference between files and that git stores a snapshot of all the files.

But I didn't really get what they mean by snapshot. Does git really make a copy of all the files in each commit because that's what I understood from their explanation.

PS: If any one has any better source to learn git I would appreciate it.

Git does include for each commit a full copy of all the files, except that, for the content already present in the Git repo, the snapshot will simply point to said content rather than duplicate it.
That also means that several files with the same content are stored only once.

So a snapshot is basically a commit, referring to the content of a directory structure.

Some good references are:

Lab 12 illustrates how to get previous snapshots

The progit book has the more comprehensive description of a snapshot:

The major difference between Git and any other VCS (Subversion and friends included) is the way Git thinks about its data.
Conceptually, most other systems store information as a list of file-based changes. These systems (CVS, Subversion, Perforce, Bazaar, and so on) think of the information they keep as a set of files and the changes made to each file over time

Git doesn’t think of or store its data this way. Instead, Git thinks of its data more like a set of snapshots of a mini filesystem.
Every time you commit, or save the state of your project in Git, it basically takes a picture of what all your files look like at that moment and stores a reference to that snapshot.
To be efficient, if files have not changed, Git doesn’t store the file again—just a link to the previous identical file it has already stored.
Git thinks about its data more like as below:

This is an important distinction between Git and nearly all other VCSs. It makes Git reconsider almost every aspect of version control that most other systems copied from the previous generation. This makes Git more like a mini filesystem with some incredibly powerful tools built on top of it, rather than simply a VCS.

While that's true and important on the conceptual level, it is NOT true at the storage level.
Git does use deltas for storage.
Not only that, but it's more efficient in it than any other system. Because it does not keep per-file history, when it wants to do delta compression, it takes each blob, selects some blobs that are likely to be similar (using heuristics that includes the closest approximation of previous version and some others), tries to generate the deltas and picks the smallest one. This way it can (often, depends on the heuristics) take advantage of other similar files or older versions that are more similar than the previous. The "pack window" parameter allows trading performance for delta compression quality. The default (10) generally gives decent results, but when space is limited or to speed up network transfers, git gc --aggressive uses value 250, which makes it run very slow, but provide extra compression for history data.

Git logically stores each file under its SHA1. What this means is if you have two files with exactly the same content in a repository (or if you rename a file), only one copy is stored.

But this also means that when you modify a small part of a file and commit, another copy of the file is stored. The way git solves this is using pack files. Once in a while, all the “loose” files (actually, not just files, but objects containing commit and directory information too) from a repo are gathered and compressed into a pack file. The pack file is compressed using zlib. And similar files are also delta-compressed.

The same format is also used when pulling or pushing (at least with some protocols), so those files don't have to be recompressed again.

The result of this is that a git repository, containing the whole uncompressed working copy, uncompressed recent files and compressed older files is usually relatively small, two times smaller than the size of the working copy. And this means it's smaller than SVN repo with the same files, even though SVN doesn't store the history locally.

OP: What does snapshot in Git mean? Is is true that Git makes a copy of all the files in each commit?

What does snapshot in Git mean?

In Git, all commits are immutable snapshots of your project (ignored files excluded) at a specific point in time. This means that each and every commit contains a unique representation of your entire project, not just the modified or added files (deltas), at the time of commit. Apart from references to the actual files, each commit is also infused with relevant metadata such as commit message, author (inc. time stamp), committer (inc. timestamp), and references to parent commit(s); all of which are immutable!

Since the commit (or commit object as it is formally called) is immutable in its entirety, trying to modify any of its content isn't possible. Commits can never be tampered with or modified once they are created!

From the Pro Git book we learn that:

Git is a content-addressable filesystem. Great. What does that mean? It means that at the core of Git is a simple key-value data store. What this means is that you can insert any kind of content into a Git repository, for which Git will hand you back a unique key you can use later to retrieve that content.

So let's look at below illustration to figure out what above statement really means, and how Git store data (and particularly files) internally. 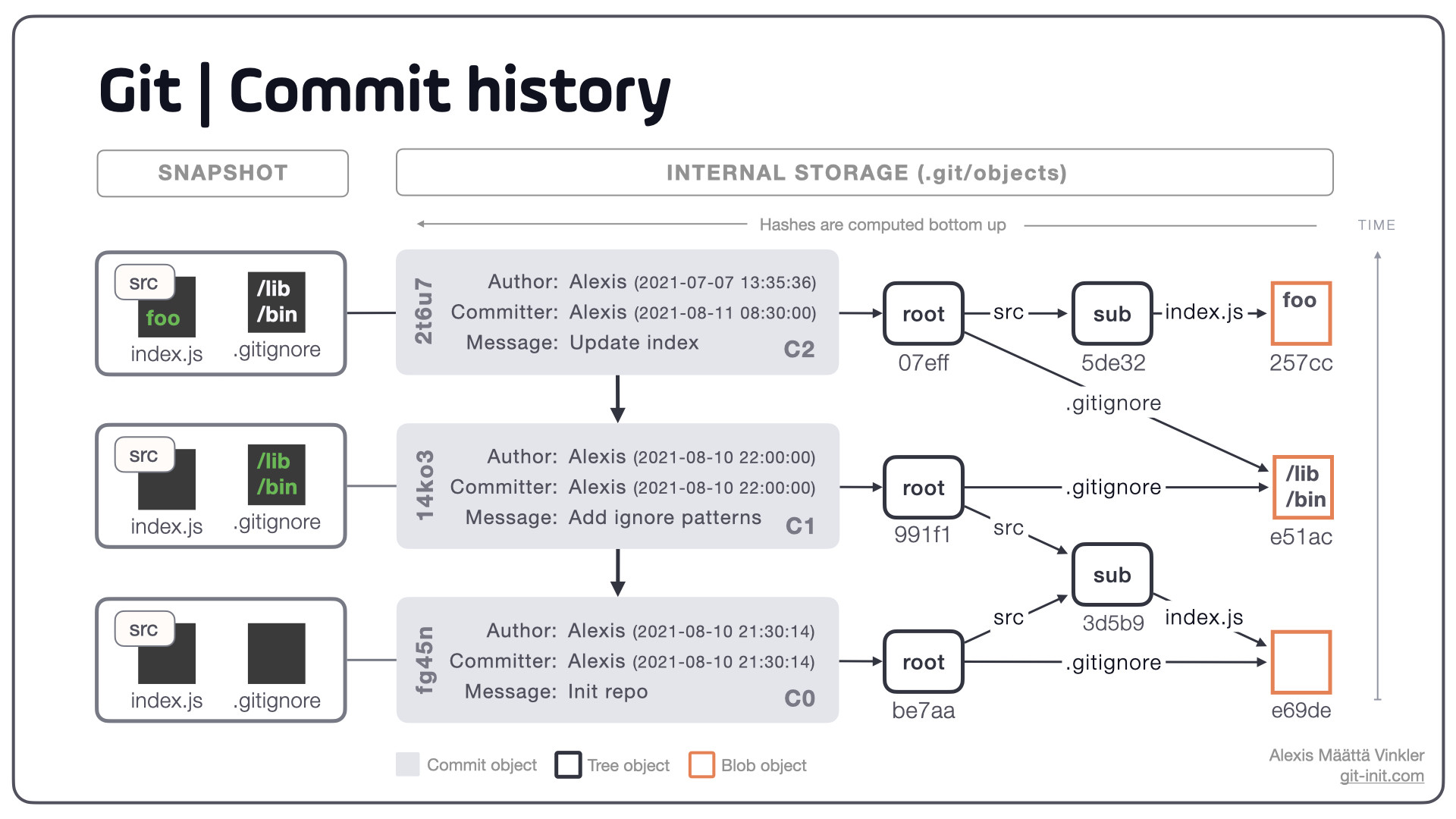 A simple commit history containing three commits, including an overview of how the actual data (files and directories) are stored inside Git. On the left hand side the actual snapshot is displayed, with the "delta change" compared to previous commit highlighted in green. On the far right are the internal objects used for storage.

Git makes use of three main objects in it's internal storage:

To store a file inside Git in a general sense (e.g. content + filename/directory) one blob and a tree is needed; the blob to store just the file content, and the tree to store the filename/directory referencing the blob. To construct nested directories, multiple trees are used; a tree can hence reference both blobs and trees. From a high-level perspective you don't have to worry about blobs and trees as Git creates them automatically as part of the commit process.

Note: Git computes all hashes (keys) bottom up, starting with the blobs, moving passed any sub trees, ultimately arriving at the root tree – feeding the keys as input to it's direct parents. This process produces the structure visualized above which is known in mathematics and computer science as a Directed Ascyclical Graph (DAG), e.g. all references moves in one direction only without any cyclical dependencies.

By scrutinizing above history we see that for the initial C0 commit two empty files were added, src/index.js and .gitignore – but only one blob got created! That's because Git only stores unique content, and since the content of the two empty files obviously resulted in the same hash: e69de – only one entry was needed. However, as their filenames and paths differed two trees got created to keep track of this. Each tree returning a unique hash (key) computed based on the paths and blobs it's referencing.

Continuing upwards to the second commit C1, we see that only the .gitignore file got updated producing a new blob (e51ac) containing that data. As far as the root tree goes it still makes use of the same sub tree reference for the src/index.js file. However, the root tree is also a brand new object with a new hash (key) simply because the underlying .gitignore reference changed.

In the final C2 commit only the src/index.js file got updated and a new blob (257cc) emerged – forcing the creation of a new sub tree (5de32), and ultimately a new root tree (07eff).

Everytime a new commit is created, a snapshot of your entire project is recorded and stored to the internal database following a DAG data structure. Whenever a commit is checked out, your Working Tree is reconstructed to reflect the same state as the underlying snapshot is referencing through the root tree.

Source: Above excerpt is taken from this full length post on the subject: Immutable Snapshots - One of Git's Core Concepts

4
Do duplicate files increase git repo size?
3
Where are the project files stored in a git repository `.git` folder?
-2
Where sources committed to Git are stored in the server?
1
How does Git achieve storage efficiency when storing multiple versions of a file?
1
Does a blob contain the current status a file or only the last change?
-3
How git manage to store the files branch wise?
0
How can git compact files so much?
0
What are the 3 files after git add and git commit?
0
Is the code in git branches actually stored locally or on github?
1705
.gitignore is ignored by Git
See more linked questions