A regex for version number parsing

I have a version number of the following form:

where version, release and modification are either a set of digits or the '*' wildcard character. Additionally, any of these numbers (and any preceding .) may be missing.

So the following are valid and parse as:

But these are not valid:

Can anyone provide me a not-too-complex regex to validate and retrieve the release, version and modification numbers?

I'd express the format as:

"1-3 dot-separated components, each numeric except that the last one may be *"

As a regexp, that's:

[Edit to add: this solution is a concise way to validate, but it has been pointed out that extracting the values requires extra work. It's a matter of taste whether to deal with this by complicating the regexp, or by processing the matched groups.

In my solution, the groups capture the "." characters. This can be dealt with using non-capturing groups as in ajborley's answer.

Also, the rightmost group will capture the last component, even if there are fewer than three components, and so for example a two-component input results in the first and last groups capturing and the middle one undefined. I think this can be dealt with by non-greedy groups where supported.

Perl code to deal with both issues after the regexp could be something like this:

Which isn't really any shorter than splitting on "." ]

Use regex and now you have two problems. I would split the thing on dots ("."), then make sure that each part is either a wildcard or set of digits (regex is perfect now). If the thing is valid, you just return correct chunk of the split.

At the top level, "*" is a special case of a valid version number. Otherwise, it starts with a number. Then there are zero, one, or two ".nn" sequences, followed by an optional ".*". This regex would accept 1.2.3.* which may or may not be permitted in your application.

The code for retrieving the matched sequences, especially the (\.\d+){0,2} part, will depend on your particular regex library.

Thanks for all the responses! This is ace :)

My 2 cents: I had this scenario: I had to parse version numbers out of a string literal. (I know this is very different from the original question, but googling to find a regex for parsing version number showed this thread at the top, so adding this answer here)

So the string literal would be something like: "Service version 1.2.35.564 is running!"

A small C# snippet to test this looks like below:

Don't know what platform you're on but in .NET there's the System.Version class that will parse "n.n.n.n" version numbers for you.

I had a requirement to search/match for version numbers, that follows maven convention or even just single digit. But no qualifier in any case. It was peculiar, it took me time then I came up with this:

This makes sure the version,

One drawback is that version can even end with '.' But it can handle indefinite length of version (crazy versioning if you want to call it that)

If you are not unhappy with '.' ending, may be you can combine with endswith logic

I tend to agree with split suggestion.

Ive created a "tester" for your problem in perl

I've seen a lot of answers, but... i have a new one. It works for me at least. I've added a new restriction. Version numbers can't start (major, minor or patch) with any zeros followed by others.

It's based in a previous one. But i see this solution better... for me ;)

Perhaps a more concise one could be :

This should work for what you stipulated. It hinges on the wild card position and is a nested regex: 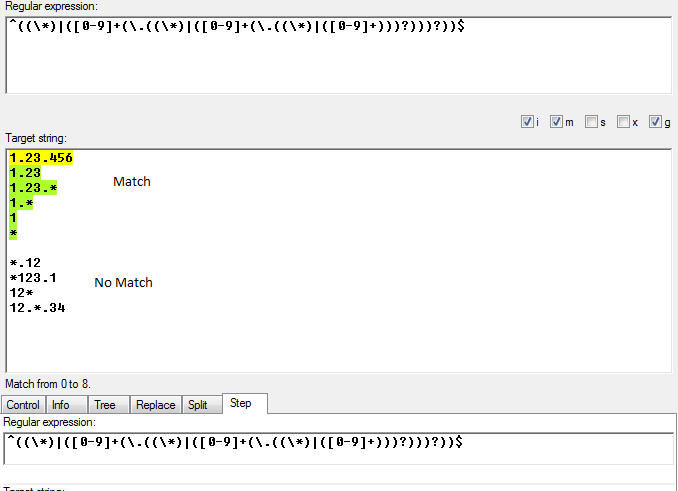 This gives the three parts in groups 4,5,6 BUT: They are aligned to the right. So the first non-null one of 4,5 or 6 gives the version field.

My take on this, as a good exercise - vparse, which has a tiny source, with a simple function:

For parsing version numbers that follow these rules: - Are only digits and dots - Cannot start or end with a dot - Cannot be two dots together

This one did the trick to me.

Sometimes version numbers might contain alphanumeric minor information (e.g. 1.2.0b or 1.2.0-beta). In this case I am using this regex:

Does exactly match your 6 first examples, and rejects the 4 others

You can remove '(?ms)'
I used it to indicate to this regexp to be applied on multi-lines through QuickRex

I would propose the less elegant:

Keep in mind regexp are greedy, so if you are just searching within the version number string and not within a bigger text, use ^ and $ to mark start and end of your string. The regexp from Greg seems to work fine (just gave it a quick try in my editor), but depending on your library/language the first part can still match the "*" within the wrong version numbers. Maybe I am missing something, as I haven't used Regexp for a year or so.

This should make sure you can only find correct version numbers:

edit: actually greg added them already and even improved his solution, I am too slow :)

It seems pretty hard to have a regex that does exactly what you want (i.e. accept only the cases that you need and reject all others and return some groups for the three components). I've give it a try and come up with this:

IMO (I've not tested extensively) this should work fine as a validator for the input, but the problem is that this regex doesn't offer a way of retrieving the components. For that you still have to do a split on period.

This solution is not all-in-one, but most times in programming it doesn't need to. Of course this depends on other restrictions that you might have in your code.

I found this, and it works for me:

Not the answer you're looking for? Browse other questions tagged regex versioning or ask your own question.

-3
Regex for git tag
4
Regex pattern to match valid version numbers
1
How can I properly check a string format if it follows a version number format?
2
Regex to match version number for zero or more time
1
How to extract version number from linux kernel version string or kernel directory listing
1
A regex for NPM or any other package both for name and any version number
0
Allow only numbers and multiple dots in jquery form input
0
checking version numbers in rails
0
This regex isn't allowing the extra digit for some reason... why?

996
How to validate phone numbers using regex
137
Build and Version Numbering for Java Projects (ant, cvs, hudson)
1914
RegEx match open tags except XHTML self-contained tags
2519
Homebrew install specific version of formula?
946
Check whether a string matches a regex in JS
750
Is there a way to get version from package.json in nodejs code?
231
Concrete Javascript Regex for Accented Characters (Diacritics)