Our build server is taking too long to build one of our C++ projects. It uses Visual Studio 2008, running devenv.com MyApp.sln /Build -- see devenv command-line switches (although that's for a newer version of VS). Is there a way to get devenv.com to log the time taken to build each project in the solution, so that I know where to focus my efforts?

Improved hardware is not an option in this case.

I've tried setting the output verbosity (under menu Tools → Options → Projects and Solutions → Build and Run → MSBuild project build output verbosity). This doesn't seem to have any effect in the IDE.

When running MSBuild from the command line (and, for Visual Studio 2008, it needs to be MSBuild v3.5), it displays the total time elapsed at the end, but not in the IDE.

I really wanted a time-taken report for each project in the solution, so that I could figure out where the build process was taking its time.

Go to menu Tools → Options → Projects and Solutions → Build and Run → MSBuild project build output verbosity. Set to "Normal" or "Detailed", and the build time will appear in the output window.

I have created an extension to measure the build times and present the order of events in a graph: Visual Studio Build Timer.

Apart from showing which projects take longer, the chart displays effective dependencies between them, i.e., projects that need to wait for others, which helps figuring out what dependencies need to break to increase the parallelization of your build.

For Visual Studio 2012 you could use the Build Monitor extension.

If you're stuck on VS2005 you could use the vs-build-timer plugin. At the completion of a build it shows the total time taken and a (optional) summary of each of the project durations.

Disclaimer; I wrote it. And yes, I need to create an installer...one day!

Since your question involves using DevEnv from the command line, I would also suggest using MSBuild (which can build .sln files without modification).

msbuild /? will show you other useful options for the filelogger.

If you want to visualize your build, you can use Incredibuild. Incredibuild's now available in standalone-mode (not distributed, but for use only on 8 cores on your local machine) for free as part of Visual Studio 2015 Update 1.

Disclaimer: I work for Incredibuild

I ended up here because I just wanted the date and time included in the build output. Should others be searching for something similar it's as simple as adding echo %date% %time% to the Pre-build and/or Post-build events under project, Properties → Compile → Build Events.

So every time you see build results (or during build) do Ctrl + Home in the output window. And somewhere in that area the time and date stares at your face!

Oh and you might end up adding these details to many projects as the build order can change :)

I found a better solution! ###

Tools → Options → Projects & Solutions → Build and Run → MSBuild project build output verbosity = Normal (or above Minimal). This adds the time in the beginning/top of output window. Ctrl + Home in the output window should do.

If we want to see how much time each projects take then Projects & Solutions → VC++ Project Settings → Build Timing = yes. It is applicable to all projects; "VC++" is misleading. 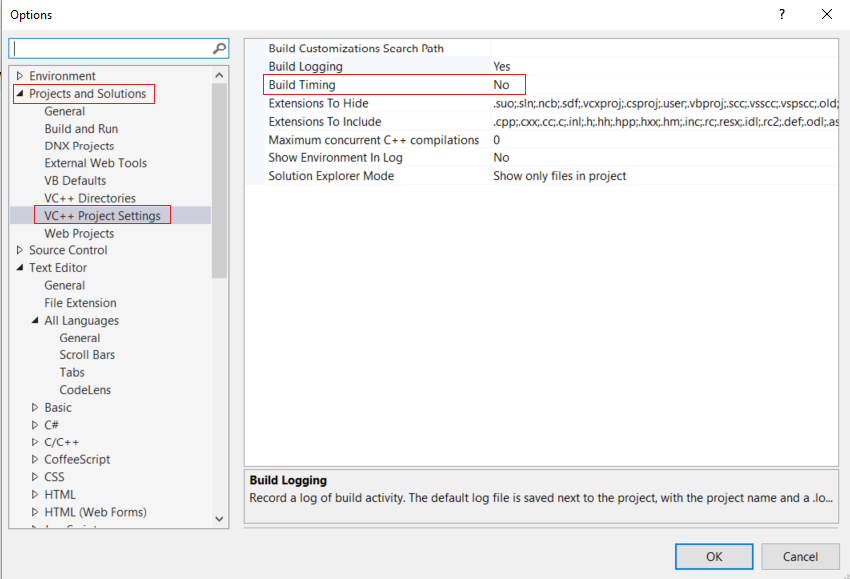 If you want to invoke an external program that can track your total build times, you can use the following solution for Visual Studio 2010 (and maybe older). The code below uses CTime by Casey Muratori. Of course, you can also use it to simply print the build time.

Open up the macro explorer, and paste the following before End Module:

The answer was taken from here and here.

Parallel Builds Monitor is a nice extension for Visual Studio.

896
What are the various "Build action" settings in Visual Studio project properties and what do they do?
564
What does the Visual Studio "Any CPU" target mean?
295
MSBuild doesn't copy references (DLL files) if using project dependencies in solution
1258
.gitignore for Visual Studio Projects and Solutions
409
Cannot import the keyfile 'blah.pfx' - error 'The keyfile may be password protected'
1280
Difference between Build Solution, Rebuild Solution, and Clean Solution in Visual Studio?
1114
How do you auto format code in Visual Studio?
561
Visual Studio debugging/loading very slow
423
Found conflicts between different versions of the same dependent assembly that could not be resolved