How do I localize UIImagePickerController

I've written an iOS app which uses custom localization (for various reasons). It undefines NSLocalizedString and replaces with an inline function of the same name which pulls it's values from an NSDictionary which is downloaded from a server.

My problem is this... Everything works fine, but standard UIKit views (namely UIImagePickerController) aren't being internationalized, which I believe is something that should happen automatically when the device language is changed?

For example, my full app is displaying it's japanese counterpart, but even though the device language is set to japanese the standard controls (UIImagePickerController and cancel button on search bars aren't showing!)

Any help would be much appreciated :D

I have tried removing my redefinition of NSLocalizedString and I still have the same problem, so while advising me against redefining standard api functionality is great, it doesn't really help me with the issue I've encountered.

Did you add the languages you wish to support to your app's definition? In XCode 4 this can be found in your Project Info page (see below). 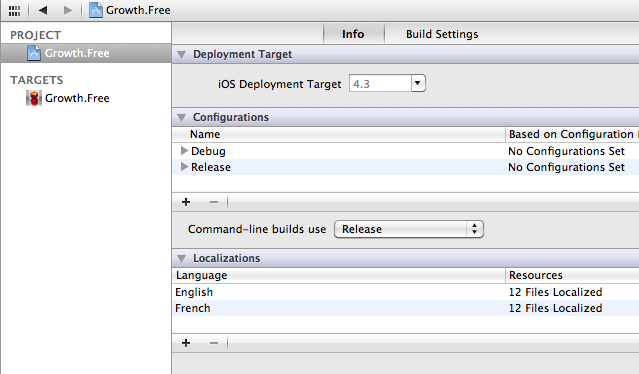 Not the answer you're looking for? Browse other questions tagged iphone ios internationalization or ask your own question.

1221
How can I develop for iPhone using a Windows development machine?
1227
How can I disable the UITableView selection?
1041
How to change the name of an iOS app?
1357
How to check for an active Internet connection on iOS or macOS?
1734
How can I make a UITextField move up when the keyboard is present - on starting to edit?
342
iOS UIImagePickerController result image orientation after upload
6
How to localize the app name?
4
how to force an ios app to use a certain localization?
3
Danish localization broken in iOS 8?