I have the below code in a .Net 4 Winforms app which loads an assembly. All files are on a C:. There are numerous DLL's which work fine but two error with the following:

An attempt was made to load an assembly from a network location which would have caused the assembly to be sandboxed in previous versions of the .NET Framework. This release of the .NET Framework does not enable CAS policy by default, so this load may be dangerous. If this load is not intended to sandbox the assembly, please enable the loadFromRemoteSources switch. See http://go.microsoft.com/fwlink/?LinkId=155569 for more information.

This only seems to be a problem on some PCs

Well turns out the issue is because the file was possibly downloaded from the internet. 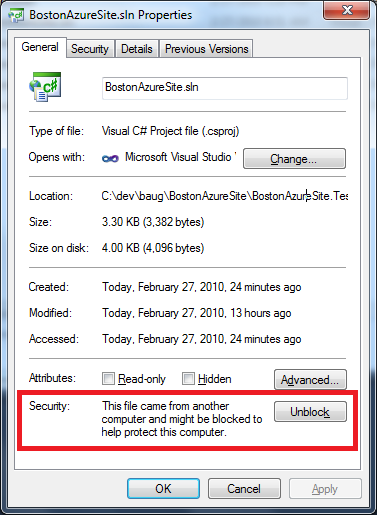 This is how I managed to get it to work, without resorting to any clicking on client side:

Keep in mind if you CreateDomain with Evidence parameter, you will get the 'This method uses CAS policy, which has been obsoleted by the .NET Framework.' message.

Alternatively, you can set up a proper sandbox:

Piggybacking on Jon, I had this problem but with lots of assemblies in many different folders. I downloaded Streams from Sysinternals to unblock the files en masse. I found a good discussion on Super User about this topic.

Not the answer you're looking for? Browse other questions tagged .net vb.net .net-4.0 code-access-security or ask your own question.

1
MVVM Light Toolkit throws an System.IO.FileLoadException
3
C# 3.5 winforms app upgraded to C#4.0 issue because of the exclusion of CAS
11
Seeking alternative to AppDomain.CreateDomain(string, evidence) due to obsolete CAS policy
16
Load assembly from network location
3
How do I set switches normally defined in app.config in the C# Interactive window?
1
Why am I having an error trying to locally install cs-script?
15
Not allowed to load assembly from network location
0
Error when using .Net DLL published