In R, is it possible to overlay 2 colours in a plot to make a 3rd (e.g. with additive or subtractive colour mixing)

I'd like to do a scatter plot with 2 categories of the data, one plotted in yellow and one in blue, and them showing up in green where they overlay (or any other combination). I've found that things are a little more difficult even with transparency. The colour of the graph is influenced by whether the last point plotted in a space was blue or yellow.

For example with the following code:

Depending on how you set the vector orders (which sets up which way round the two large points are drawn) you get different results: 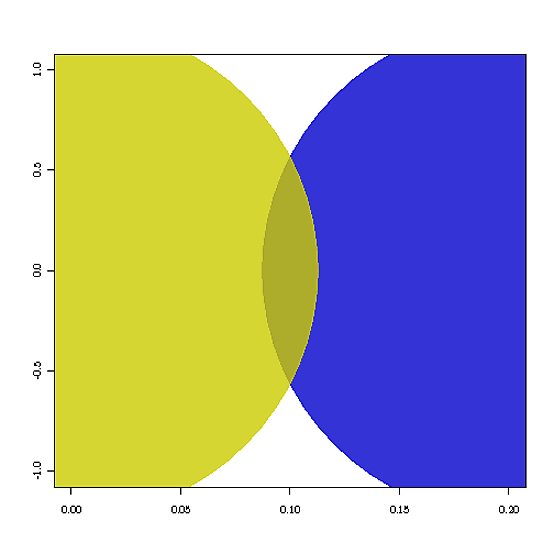 And if you swap the order in which you plot the two circles round you get: 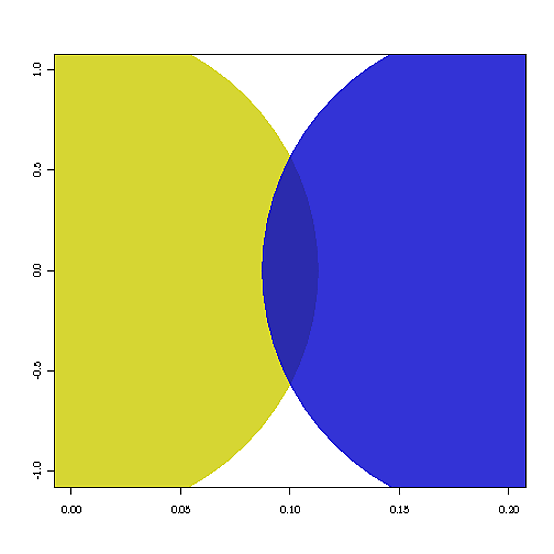 Either way, I was anticipating mixing the colours to get a green. Is there a way to do this? Thanks!

Edit - the two plots were made using the pdf device. I've also tried running the code through tikzDevice to see if that worked but it didn't.

The help file for the pdf() device says the default setting for background is "transparent", although that does not seem to be its behavior in practice, perhaps because viewers assume a white background or perhaps because the default for the plot function is "white". The middle section first becomes a color that is an equal blend of white and green, and second second you then add to it the blue. So I'm guessing that the math would predict an rgb value of (0.5, 0.5, (0.5+0.8)/2 ) followed by blending that mixture with the overlayed color And I think the white+col1 gets added in equal proportions to the values from col2 which makes the math non-commutative. At any rate the end result will probably be different if you can force the background to "transparent". The default behavior is more like mixing paints than like shining theater lights.

The PDF color model is described in http://www.adobe.com/devnet/pdf/pdf_reference.html and will determine what you can expect from a pdf device (but not necessarily what a viewer will provide).

I tested my theory that the white background was the problem (and appear to have disproved it) by changing the background to "black" in hopes that there would be no added values to the layered rgb vectors:

Reversing the 'orders' indicator does NOT result in the same blended color with a black background, either.

EDIT: There is a prior SO posting with the rules for blending colors and alphas: How to calculate an RGB colour by specifying an alpha blending amount?

Not the answer you're looking for? Browse other questions tagged r graphics colors rgb or ask your own question.

56
How to calculate an RGB colour by specifying an alpha blending amount?
0
Custom legend for bubble plot using ggplot