Multiprocessing in a pipeline done right

I'd like to know how multiprocessing is done right. Assuming I have a list [1,2,3,4,5] generated by function f1 which is written to a Queue (left green circle). Now I start two processes pulling from that queue (by executing f2 in the processes). They process the data, say: doubling the value, and write it to the second queue. Now, function f3 reads this data and prints it out. 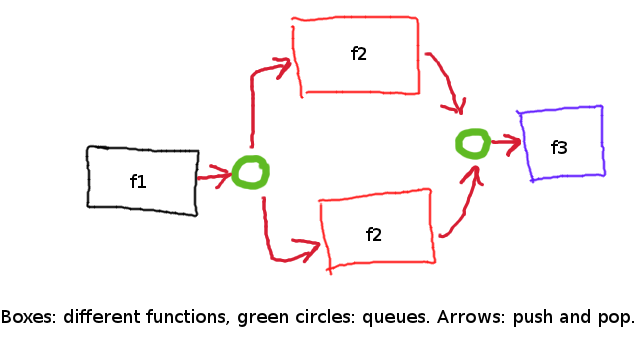 Inside the functions there is a kind of a loop, trying to read from the queue forever. How do I stop this process?

f1 does not only send the list, but also a None object or a custon object, class PipelineTerminator: pass or some such which is just being propagated all the way down. f3 now waits for None to come, when it's there, it breaks out of the loop. Problem: it's possible that one of the two f2s reads and propagates the None while the other one it still processing a number. Then the last value is lost.

f3 is f1. So the function f1 generates the data and the pipes, spawns the processes with f2 and feeds all data. After spawning and feeding, it listens on the second pipe, simply counting and processing the received objects. Because it knows how much data fed, it can terminate the processes executing f2. But if the target is to set up a processing pipeline, the different steps should be separable. So f1, f2 and f3 are different elements of a pipeline, and the expensive steps are done in parallel. 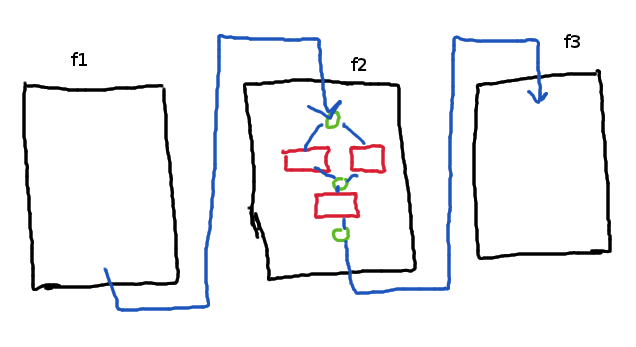 Each piece of the pipeline is a function, this function spawns processes as it likes to and is responsible to manage them. It knows, how much data came in and how much data has been returned (with yield maybe). So it's safe to propagate a None object.

(Instead of using threads, maybe one can think of a smarter solution.)

I have implemented a solution following idea 2, feeding and waiting for the results to arrive, but it was not really a pipeline with independent functions plugged together. It worked for the task I had to manage, but was hard to maintain.

I'd like to hear from you now how you implement pipelines (easy in one process with generator functions and so on, but with multiple processes?) and manage them usually.

With MPipe module, simply do this:

The above runs 4 processes:

The MPipe cookbook offers some explanation of how processes are shut down internally using None as the last task.

To run the code, install MPipe:

The only difference from the description of Idea 1 is that f2 breaks out of the while-loop when it receives the sentinel (thus terminating itself). f1 blocks until the workers are done (using w.join()) and then sends f3 the sentinel (signaling that it break out of its while-loop).

What would be wrong with using idea 1, but with each worker process (f2) putting a custom object with its identifier when it is done? Then f3, would just terminate that worker, until there was no worker process left.

Also, new in Python 3.2 is the concurrent.futures package on the standard library, that should do what you are trying to in the "right way" (tm) - http://docs.python.org/dev/library/concurrent.futures.html

Maybe it is possible to find a backport of concurrent.futures to Python 2.x series.

I use concurent.futures and three pools, which are connected together via future.add_done_callback. Then I wait for the whole process to end by calling shutdown on each pool.

The easiest way to do exactly that is using semaphores.

F1 is populating your 'Queue' with the data you want to process. End the end of this push, you put n 'Stop' keywords in your queue. n = 2 for your example, but usually the number of involved workers. Code would look like:

F2 is pulling from the provided queue by a get-command. The element is taken from the queue and deleted in the queue. Now, you can put the pop into a loop while paying attention to the stop signal:

This one is a bit tricky. You could generate a semaphore in F2 that acts as a signal to F3. But you do not know when this signal arrives and you may loose data. However, F3 pulls the data the same way as F2 and you could put that into a try... except-statement. queue.get raises an queue.Emptywhen there are no elements in the queue. So your pull in F3 would look like:

With tasks and results being queues. So you do not need anything which is not already included in Python.

You can do more complex stuff

Not the answer you're looking for? Browse other questions tagged python multiprocessing or ask your own question.

3
How to set up a pipeline using Queues in multiprocessing