How to create a empty bullet paragraph by BulletSpan?

I wanted to create a empty bullet paragraph, but it didn't work. This is my code:

When i ran above code, it seemed this line doesn't work

Instead, i saw an unexpected white space after "123". Anyone knows how to create a empty bullet paragraph by BulletSpan? Thanks!

I ran your code and see what you mean. The strange white space after "123" appears to be a graphical glitch, because it's not actually treated as a space character; i.e. hit backspace and you'll see that the number "3" gets removed.

That being said, fortunately there's an easy fix for your problem: you'll need to change the indices on which you're applying the spans. Swap out the lines in your own code for the ones below and you'll see both the strange white space is gone and a third, empty bullet appears. This will also introduce some spacing between the bullet and the actual text following it.

Personally I would tend make this a bit more flexible and break up the complete string into separate parts and iterate over those. Using a SpannableStringBuilder you can then append text and set spans with every concatenation. Under water this is already happening, as at runtime contentET.getText() will actually return a SpannableStringBuilder. :) 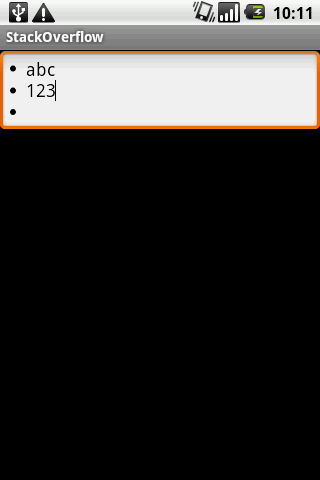 2827
How can I save an activity state using the save instance state?
2264
How do I center text horizontally and vertically in a TextView?
2053
How to lazy load images in ListView in Android
4242
How to close/hide the Android soft keyboard programmatically?
3108
How to stop EditText from gaining focus when an activity starts in Android?
994
How do I create a transparent Activity on Android?
2658
How can I fix 'android.os.NetworkOnMainThreadException'?
1024
How to create RecyclerView with multiple view types
4
EditText not increasing width when adding BulletSpan