How to solve the producer-consumer using semaphores?

I need to code a problem similar to producer-consumer, that must use semaphores. I tried a couple of solutions and none of them worked. First I tried a solution on Wikipedia and it didn't worked. My current code is something like that:

Method run of the consumer:

Method run of the producer:

In the above code it happened of a consumer thread to read a position and then, another thread read the same position without a producer fill that position, something like this:

It seems that you are using a mutex not a semaphore?

In using a mutex you have only binary synchronisation - locking and unlocking one resource. Sempahores have a value that you can signal or acquire.

You are trying to lock/unlock the entire buffer but that is the wrong way to go because, as you are seeing, either the producer or consumer locks, and when the reader has locked it the producer can't fill the buffer (because it has to lock first).

You should instead create a Sempahore, then when the producer writes one packet or block of data it can signal the semaphore. The consumers can then be trying to acquire the semaphore so they will be waiting until the producer has signalled a packet has been written. Upon signalling a written packet, one of the consumers will be woken and it will know it can read one packet. It can read a packet, then go back to trying to acquire on the semaphore. If in that time the producer has written another packet it has signalled again and either of the consumers will then go on to read another packet. Etc...

If you have multiple consumers then the consumers (not the producer) should lock the buffer when reading the packet (but not when acquiring the semaphore) to prevent race conditions. In the example below the producer also locks the list since everything is on the same JVM.

One of the most common usage pattern of Multi threaded application is to create an asynchronous communication network. Several real world applications require this. There are 2 ways of achieving this :- 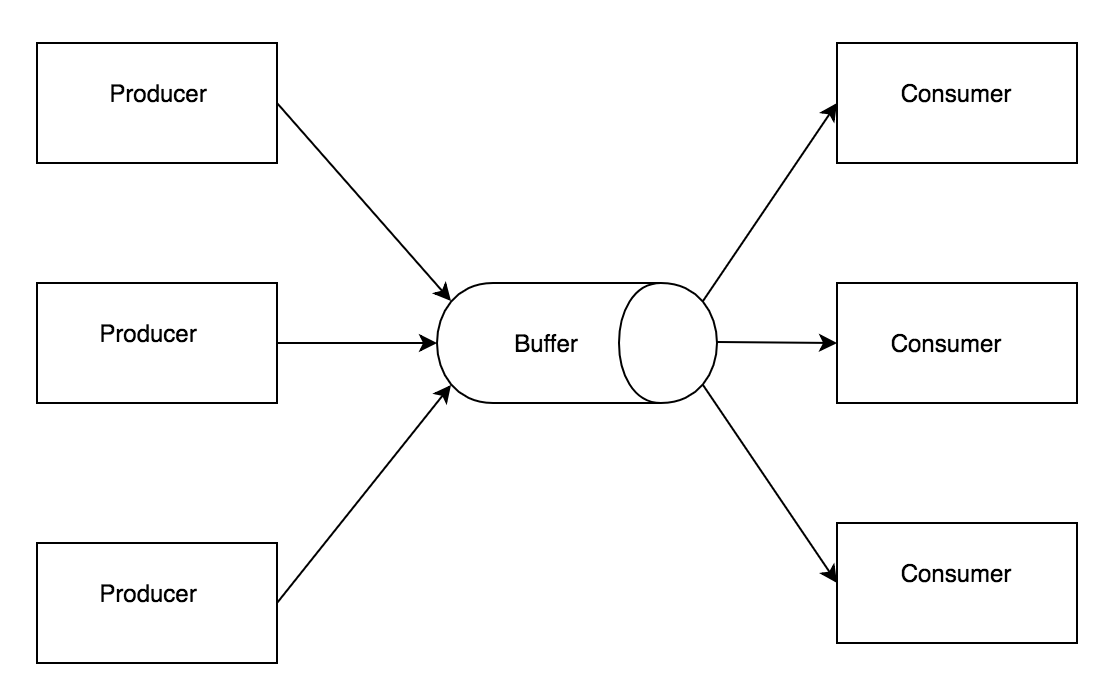 There are several ways to create a Producer-Consumer pattern.

We use 2 semaphores - 1 for consumers and 1 for producers.

The number of permits allowed for the producer are set to maximum buffer size.

Each consumer consumes 1 read permit and releases 1 write permit for consumption of each message.

Imagine the permit to be piggy banked on the actual message. Write permit flows from the Producer to Consumer (and back to the Producer). Read permit flows from the Consumer to Producer (and back to the Consumer). Total messages in the buffer at any given point of time will be exactly equal to the number of read permits issued. If the rate of producing messages is greater than the rate of consuming messages, then at a certain point, number of write permits available would be exhausted and all the producer threads would be blocked until a consumer reads from the buffer and releases a write permit. The same logic exists the other way round as well. 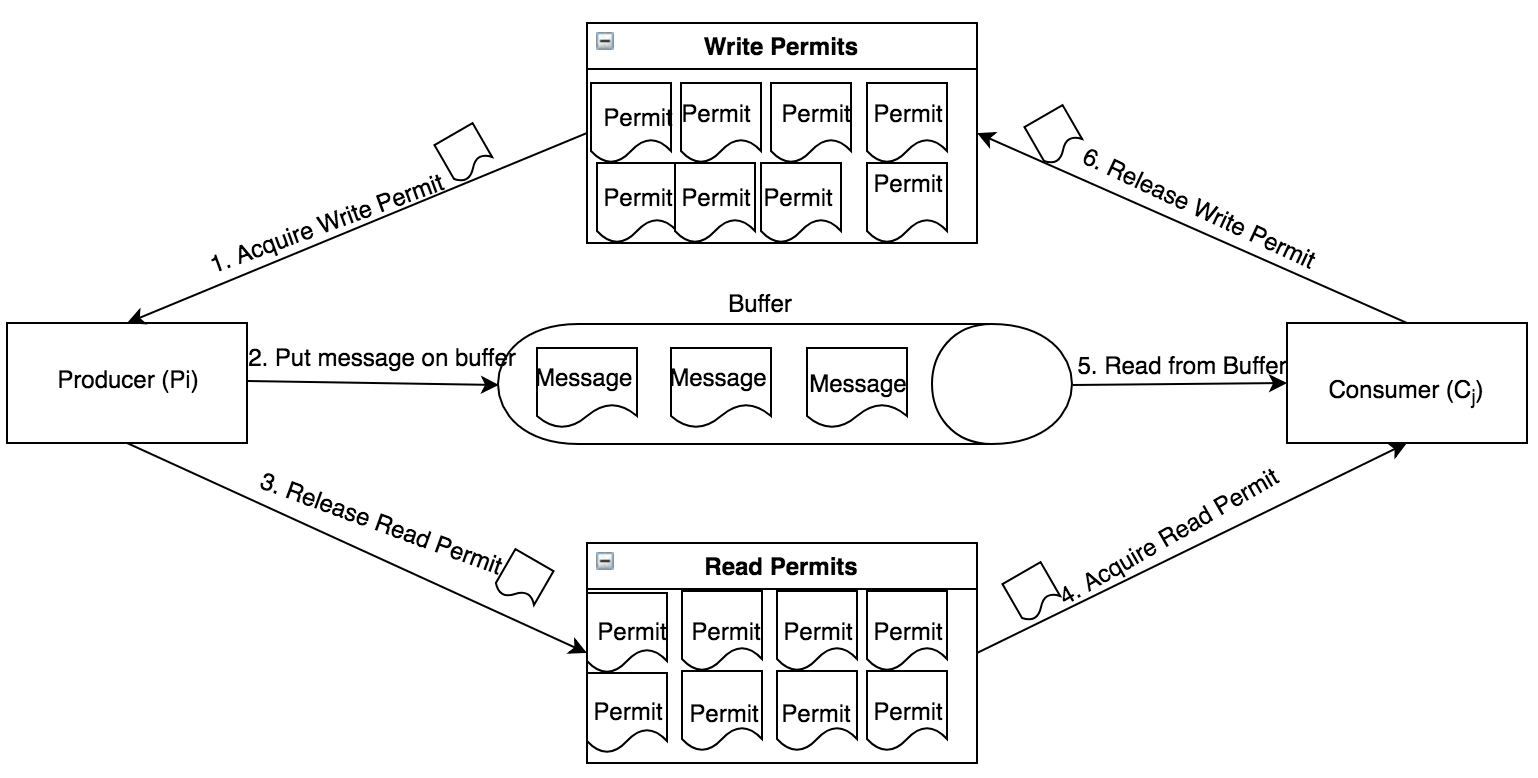 Above is a more visual articulation of flow of messages and permits in the system. By using Semaphores, we are only abstracting away the gory details and care required to write a piece of code using wait/notify/notifyAll. The above code can be compared with the wait et. al approach :

When a thread is blocked for lack of permits, it is equivalent to a wait() call on that semaphore.

When a thread releases a permit, it is equivalent to a notifyAll() call on that particular semaphore.

Not the answer you're looking for? Browse other questions tagged java multithreading concurrency concurrent-programming or ask your own question.

2
notify() instead of notifyAll() for blocking queue
1
Multithreading with Semaphor, Mutex and PThread
1
Generating multiple thumbnails efficiently from a single Image stream

1604
How does the Java 'for each' loop work?
1648
How do I create a Java string from the contents of a file?
2658
How can I create an executable JAR with dependencies using Maven?
1505
How do I update the GUI from another thread?
823
What is PECS (Producer Extends Consumer Super)?
1731
How can I avoid Java code in JSP files, using JSP 2?
1
Problem in multi-threaded Java application - synchronized method not working as expected
843
Unfortunately MyApp has stopped. How can I solve this?
1
How to format java time properly