Is there any way to display both relative and absolute line numbers simultaneously in Vim? Either side-by-side, or some other interesting presentation are fine. 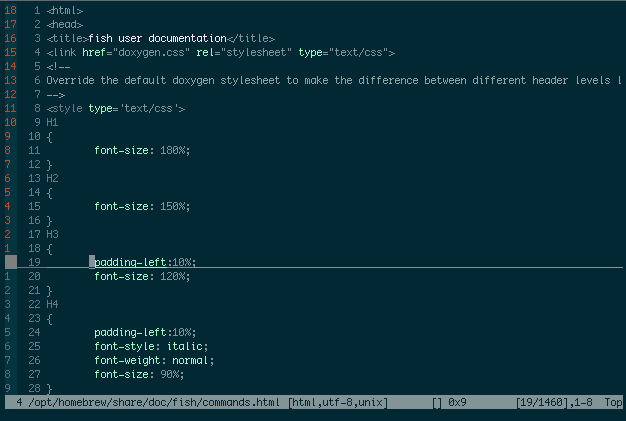 When setting this option, 'number' is reset.

The number in front of the cursor line also depends on the value of 'number', see |number_relativenumber| for all combinations of the two options.

One crazy notion I tried: :vertical diffsplit plus :setlocal relativenumber. This gets two copies of the buffer next to one another, linked in scroll position because they're in diff mode. However, it really doesn't work properly. The relative numbers aren't updated successfully (on 7.3.154, bug potentially fixed later, but I doubt it—it's scarcely worth it), and even if they did, you'd be stuck with a great eyesore and harder management and navigation.

You could do it with a plugin writing to a special buffer which you would keep on the left, but the implementation would be ugly, and it would still make navigation hard (because it's another buffer). I for one am certainly not going to spend time writing such a plugin, though I must confess I'd like to show both forms of line numbering.

Many years later and this feature is now part of Vim and known as hybrid numbers.

You can turn this feature on by entering:

No speed penalty either. As far as I can tell.

This displays Relative Numbering (with current line in Absolute) in the focused window, and Absolute in the non-focused window.

Entering a window sets the window to relative numbers, while leaving it set it to absolute. Then if you do a vertical split of the window you would se the same buffer with relative and absoulte numbers.

1809
How to duplicate a whole line in Vim?
779
Convert DOS line endings to Linux line endings in Vim
1329
How do I move to end of line in Vim?
1367
Tab key == 4 spaces and auto-indent after curly braces in Vim
425
Vim 80 column layout concerns
1125
What is your most productive shortcut with Vim?
744
Differences between Emacs and Vim
830
What is Vim recording and how can it be disabled?
1284
What is the difference between the remap, noremap, nnoremap and vnoremap mapping commands in Vim?
918
How to make vim paste from (and copy to) system's clipboard?