Markov Decision Process: value iteration, how does it work?

I've been reading a lot about Markov Decision Processes (using value iteration) lately but I simply can't get my head around them. I've found a lot of resources on the Internet / books, but they all use mathematical formulas that are way too complex for my competencies.

Since this is my first year at college, I've found that the explanations and formulas provided on the web use notions / terms that are way too complicated for me and they assume that the reader knows certain things that I've simply never heard of.

I want to use it on a 2D grid (filled with walls(unattainable), coins(desirable) and enemies that move(which must be avoided at all costs)). The whole goal is to collect all the coins without touching the enemies, and I want to create an AI for the main player using a Markov Decision Process (MDP). Here is how it partially looks like (note that the game-related aspect is not so much of a concern here. I just really want to understand MDPs in general): 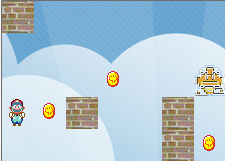 From what I understand, a rude simplification of MDPs is that they can create a grid which holds in which direction we need to go (kind of a grid of "arrows" pointing where we need to go, starting at a certain position on the grid) to get to certain goals and avoid certain obstacles. Specific to my situation, that would mean that it allows the player to know in which direction to go to collect the coins and avoid the enemies.

Now, using the MDP terms, it would mean that it creates a collection of states(the grid) which holds certain policies(the action to take -> up, down, right, left) for a certain state(a position on the grid). The policies are determined by the "utility" values of each state, which themselves are calculated by evaluating how much getting there would be beneficial in the short and long term.

Is this correct? Or am I completely on the wrong track?

I'd at least like to know what the variables from the following equation represent in my situation:

I know that s would be a list of all the squares from the grid, a would be a specific action (up / down / right / left), but what about the rest?

How would the reward and utility functions be implemented?

It would be really great if someone knew a simple link which shows pseudo-code to implement a basic version with similarities to my situation in a very slow way, because I don't even know where to start here.

Thank you for your precious time.

(Note: feel free to add / remove tags or tell me in the comments if I should give more details about something or anything like that.)

Yes, the mathematical notation can make it seem much more complicated than it is. Really, it is a very simple idea. I have a implemented a value iteration demo applet that you can play with to get a better idea.

You then set the Reward to be 0 for all states, but 100 for the goal state, that is, the location you want the robot to get to.

What value-iteration does is its starts by giving a Utility of 100 to the goal state and 0 to all the other states. Then on the first iteration this 100 of utility gets distributed back 1-step from the goal, so all states that can get to the goal state in 1 step (all 4 squares right next to it) will get some utility. Namely, they will get a Utility equal to the probability that from that state we can get to the goal stated. We then continue iterating, at each step we move the utility back 1 more step away from the goal.

On the first iteration we set

All other states remain with U = 0 after the first iteration of value iteration.

Not a complete answer, but a clarifying remark.

Maybe you could use a map from each cell to its content as state. This does ignore the movement of monsters and player, which are probably very important, too.

The details depend on how you want to model your problem (deciding what belongs to the state and in which form).

First you must understand the problem that is expressed by a MDP before thinking about how algorithms like value iteration work.

I would recommend using Q-learning for your implementation.

Maybe you can use this post I wrote as an inspiration. This is a Q-learning demo with Java source code. This demo is a map with 6 fields and the AI learns where it should go from every state to get to the reward.

Q-learning is a technique for letting the AI learn by itself by giving it reward or punishment.

This example shows the Q-learning used for path finding. A robot learns where it should go from any state.

The robot starts at a random place, it keeps memory of the score while it explores the area, whenever it reaches the goal, we repeat with a new random start. After enough repetitions the score values will be stationary (convergence).

In this example the action outcome is deterministic (transition probability is 1) and the action selection is random. The score values are calculated by the Q-learning algorithm Q(s,a).
The image shows the states (A,B,C,D,E,F), possible actions from the states and the reward given. 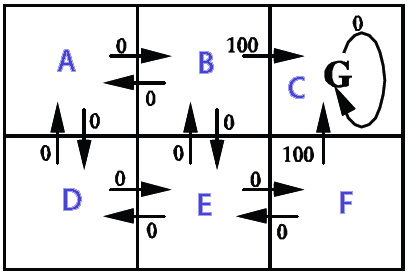 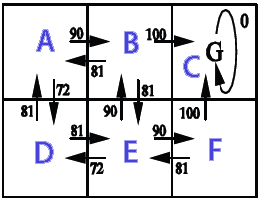 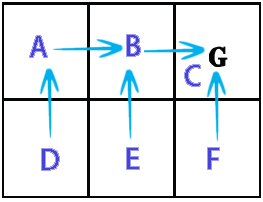 I know this is a fairly old post, but i came across it when looking for MDP related questions, I did want to note (for folks coming in here) a few more comments about when you stated what "s" and "a" were.

I think for a you are absolutely correct it's your list of [up,down,left,right].

However for s it's really the location in the grid and s' is the location you can go to. What that means is that you pick a state, and then you pick a particular s' and go through all the actions that can take you to that sprime, which you use to figure out those values. (pick a max out of those). Finally you go for the next s' and do the same thing, when you've exhausted all the s' values then you find the max of what you just finished searching on.

Suppose you picked a grid cell in the corner, you'd only have 2 states you could possibly move to (assuming bottom left corner), depending on how you choose to "name" your states, we could in this case assume a state is an x,y coordinate, so your current state s is 1,1 and your s' (or s prime) list is x+1,y and x,y+1 (no diagonal in this example) (The Summation part that goes over all s')

So if you had

You'll pick x,y+1 as your s', but then you'll need to pick an action that is maximized which is in this case left for x,y+1. I'm not sure if there is a subtle difference between just finding the maximum number and finding the state then the maximum number though so maybe someone someday can clarify that for me.

If your movements are deterministic (meaning if you say go forward, you go forward with 100% certainty), then it's pretty easy you have one action, However if they are non deterministic, you have a say 80% certainty then you should consider the other actions which could get you there. This is the context of the slippery wheel that Jose mentioned above.

I don't want to detract what others have said, but just to give some additional information.

1510
What are bitwise shift (bit-shift) operators and how do they work?
4780
How do I check if an array includes a value in JavaScript?
2
Markov decision process - how to use optimal policy formula?
1864
Image Processing: Algorithm Improvement for 'Coca-Cola Can' Recognition
0
Repeating utility values in Value Iteration (Markov Decision Process)
5
Understanding The Value Iteration Algorithm of Markov Decision Processes
1
How to find out values of Policy Iteration?