Matplotlib - add colorbar to a sequence of line plots

I have a sequence of line plots for two variables (x,y) for a number of different values of a variable z. I would normally add the line plots with legends like this:

But I have too many graphs and the legends will cover the graph. I'd rather have a colorbar indicating the value of z corresponding to the color. I can't find anything like that in the galery and all my attempts do deal with the colorbar failed. Apparently I must create a collection of plots before trying to add a colorbar.

Is there an easy way to do this? Thanks.

But this won't work according to the Matplotlib reference because a list of plots is not a "mappable", whatever this means.

xs and ys are lists of lists of x and y coordinates and zs is a list of the different conditions to colorize each line. It feels a bit like a cludge though... I thought that there would be a more neat way to do this. I like the flexibility of the plt.plot() function.

(I know this is an old question but...) Colorbars require a matplotlib.cm.ScalarMappable, plt.plot produces lines which are not scalar mappable, therefore, in order to make a colorbar, we are going to need to make a scalar mappable.

Ok. So the constructor of a ScalarMappable takes a cmap and a norm instance. (norms scale data to the range 0-1, cmaps you have already worked with and take a number between 0-1 and returns a color). So in your case:

Because your data is in the range 0-1 already, you can simplify the sm creation to:

Hope that helps somebody.

EDIT: For matplotlib v1.2 or greater the code becomes:

EDIT: For matplotlib v1.3 or greater the code becomes:

EDIT: For matplotlib v3.1 or greater simplifies to:

Here's one way to do it while still using plt.plot(). Basically, you make a throw-away plot and get the colorbar from there.

It's a little wasteful, but convenient. It's also not very wasteful if you make multiple plots as you can call plt.colorbar() without regenerating the info for it. 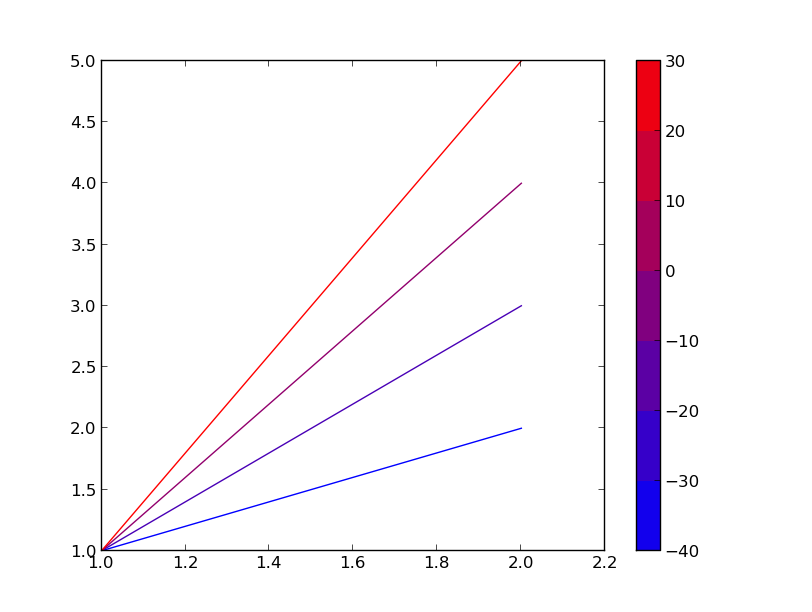 Here is a slightly simplied example inspired by the top answer given by Boris and Hooked (Thanks for the great idea!):

Discrete colorbar is more involved, because colormap generated by mpl.cm.get_cmap() is not a mappable image needed as a colorbar() argument. A dummie mappable needs to generated as shown below:

This will produce a plot with a discrete colorbar: 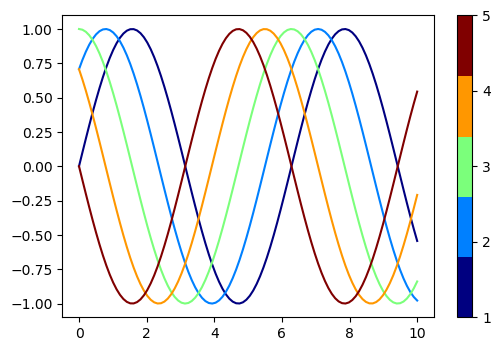 Continuous colorbar is less involved, as mpl.cm.ScalarMappable() allows us to obtain an "image" for colorbar().

This will produce a plot with a continuous colorbar: 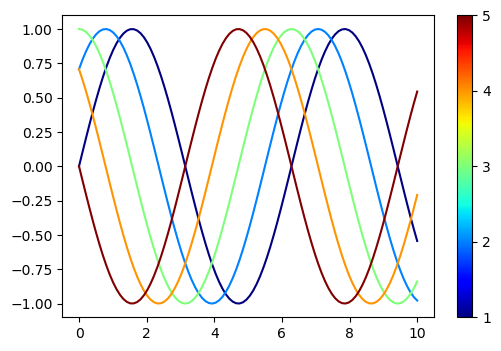 [Side note] In this example, I personally don't know why cmap.set_array([]) is necessary (otherwise we'd get error messages). If someone understand the principles under the hood, please comment :)

As other answers here do try to use dummy plots, which is not really good style, here is a generic code for a

A discrete colorbar is produced in the same way a continuous colorbar is created, just with a different Normalization. In this case a BoundaryNorm should be used. 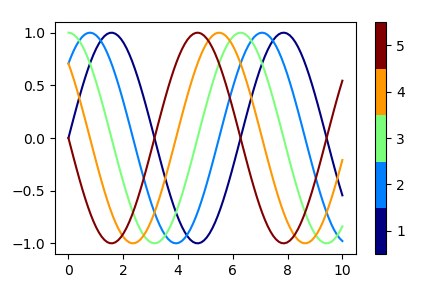 Not the answer you're looking for? Browse other questions tagged python matplotlib colorbar or ask your own question.

4
How to make multiple lines' color changing with values corresponding to gradient color?
0
Plotting lines based on a parameter value and displaying a color bar
0
Adding a colorbar to pyplot
32
Colorbar for matplotlib plot_surface command
16
Colorbar on Geopandas
7
show matplotlib colorbar instead of legend for multiple plots with gradually changing colors
5
Drawing a colorbar aside a line plot, using Matplotlib
4
How to add `colorbar` to `networkx` using a `seaborn` color palette? (Python 3)
3
matplotlib get colorbar mappable from an axis
3
Matplotlib, Log color scale on plot but linear colour scale on colorbar legend
See more linked questions

2563
How do you change the size of figures drawn with Matplotlib?
3074
How can I add new keys to a dictionary?
438
Hiding axis text in matplotlib plots
2026
How to read a file line-by-line into a list?
3222
Catch multiple exceptions in one line (except block)
1377
Save plot to image file instead of displaying it using Matplotlib
277
Matplotlib 2 Subplots, 1 Colorbar
889
How to make IPython notebook matplotlib plot inline
682
Purpose of “%matplotlib inline”