What are the major performance hitters in AS3 aside from rendering vectors?

In ActionScript 3, using vector graphics is a guaranteed way to cause massive damage to the performance of your project.

Using a single Bitmap for all graphics by using .copyPixels() through its BitmapData object in place of all vector graphics will yield a ridiculous performance boost and is essential for people like myself developing games within Flash.

Beyond this I'm not really sure what the next major things that I should be targeting and attempting to optimize are. I do use a lot of the inbuilt trigonometry functions, but they don't seem to affect it all that much. I know there are some libraries that optimize mathematics with approximation methods and similar, but so far I haven't found these necessary.

Are there any other massive known points I should be looking at? I'm more referring to the inbuilt things that I should be careful of (like avoiding vector rendering) rather than how to improve my own coding style.

Use getSize() to benchmark code

getSize() returns the size in memory of a specified object.

All primitive types except String use 4 - 8 bytes in memory. A Number, which represents a 64-bit value, is allocated 8 bytes by the ActionScript Virtual Machine (AVM), if it is not assigned a value. The behavior differs for the String type. Benchmark code and determine the most efficient object for the task.

Optimize memory by reusing objects and avoid recreating them whenever possible.

Reusing objects reduces the need to instantiate objects, which can be expensive. It also reduces the chances of the garbage collector running, which can slow down your application.

Setting a reference to a display object to null does not ensure that the object is frozen. The object continues consume CPU cycles until it is garbage collected.

BitmapData class includes a dispose() method, although the dispose method removes the pixels from memory, the reference must still be set to null to release it completely.

Using vectors, especially in large numbers, dramatically increases the need for CPU or GPU resources. Using bitmaps is a good way to optimize rendering, because the runtime needs fewer processing resources to draw pixels on the screen than to render vector content.

When a filter is applied to a display object, the runtime creates two bitmaps in memory. Using externally authored bitmaps helps the runtime to reduce the CPU or GPU load.

Use mipmapping to scale large images

Use mipmapping sparingly. Although it improves the quality of downscaled bitmaps, it has an impact on bandwidth, memory, and speed.

Use Text Engine for read-only text, TextField for input text

For read-only text, it’s best to use the Flash Text Engine, which offers low memory usage and better rendering. For input text, TextField objects are a better choice, because less ActionScript code is required to create typical behaviors, such as input handling and word-wrap.

Use callbacks instead of events

Using the native event model can be slower and consume more memory than using a traditional callback function. Event objects must be created and allocated in memory, which creates a performance slowdown. For example, when listening to the Event.ENTER_FRAME event, a new event object is created on each frame for the event handler. Performance can be especially slow for display objects, due to the capture and bubbling phases, which can be expensive if the display list is complex.

Freeze and unfreeze objects on added / removed from stage

Even if display objects are no longer in the display list and are waiting to be garbage collected, they could still be using CPU-intensive code.

unloadAndStop() method allows you to unload a SWF file, automatically freeze every object in the loaded SWF file, and force the garbage collector to run.

Event.ACTIVATE and Event.DEACTIVATE events allow you to detect when the runtime gains or loses focus. As a result, code can be optimized to react to context changes.

The activate and deactivate events allow you to implement a similar mechanism to the "Pause and Resume" feature sometimes found on mobile devices and Netbooks.

Detecting mouse interaction can be CPU-intensive when many interactive objects are shown onscreen, especially if they overlap. When possible, consider disabling mouse interaction, which helps your application to use less CPU processing, and as a result, reduce battery usage on mobile devices.

Timers are preferred over Event.ENTER_FRAME events for non-animated content that executes for a long time.

A timer can behave in a similar way to an Event.ENTER_FRAME event, but an event can be dispatched without being tied to the frame rate. This behavior can offer some significant optimization. Consider a video player application as an example. In this case, you do not need to use a high frame rate, because only the application controls are moving.

Limit the use of tweening, which saves CPU processing, memory, and battery life helping content run faster on low-tier devices.

Use Vector vs. Array

The Vector class allows faster read and write access than the Array class.

Array element access and iteration are much faster when using a Vector instance than they are when using an Array.

In strict mode the compiler can identify data type errors.

Use event capture and bubbling to minimize event handlers

Taking advantage of the bubbling of an event can help you to optimize ActionScript code execution time. You can register an event handler on one object, instead of multiple objects, to improve performance.

When painting pixels, some simple optimizations can be made just by using the appropriate methods of the BitmapData class. A fast way to paint pixels is to use the setVector() method.

Calling lock() and unlock() prevents the screen from being updated unnecessarily. Methods that iterate over pixels, such as getPixel(), getPixel32(), setPixel(), and setPixel32(), are likely to be slow, especially on mobile devices. If possible, use methods that retrieve all the pixels in one call. For reading pixels, use the getVector() method, which is faster than the getPixels() method. Also, remember to use APIs that rely on Vector objects, when possible, as they are likely to run faster.

Use String class methods instead of regular expressions

When a String class method is available, it runs faster than the equivalent regular expression and does not require the creation of another object.

Using the square bracket operator can slow down performance. You can avoid using it by storing your reference in a local variable.

Calling functions can be expensive. Try to reduce the number of function calls by moving code inline.

Moving the function call inline results in code that is more than four times faster.

Even if the off-stage elements are not shown onscreen and are not rendered, they still exist on the display list. The runtime continues to run internal tests on these elements to make sure that they are still off-stage and the user is not interacting with them.

When a display object uses alpha blending, the runtime must combine the color values of every stacked display object and the background color to determine the final color. Thus, alpha blending can be more processor-intensive than drawing an opaque color. This extra computation can hurt performance on slow devices.

A higher frame rate expends more CPU cycles and energy from the battery than a lower rate. 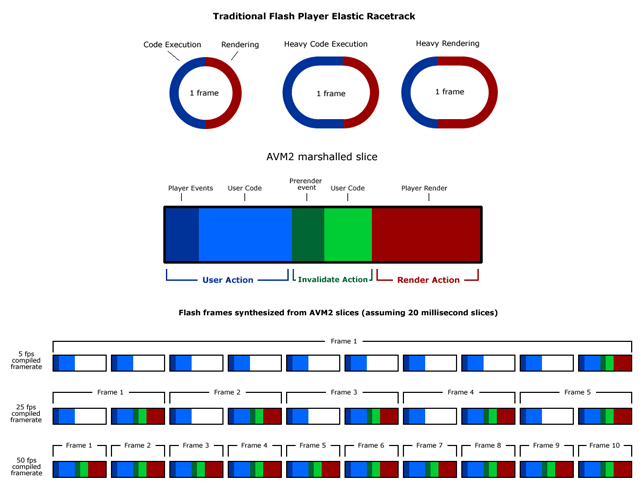 This feature caches a vector object, renders it as a bitmap internally, and uses that bitmap for rendering. Bitmap caching improves rendering if the cached content is not rotated, scaled, or changed on each frame. Any transformation other than translation on the x- and y-axes, rendering is not improved.

Using only a single cached bitmap is used in memory and shared by all instances.

Isolate events such as Event.ENTER_FRAME in a single handler

The bitmap caching feature allows you to cache vector content as bitmaps to improve rendering performance. This feature is helpful for complex vector content and also when used with text content that requires processing to be rendered.

Alpha transparency places an additional burden on the runtime when drawing transparent bitmap images. You can use the opaqueBackground property to bypass that, by specifying a color as a background.

In order to leverage GPU acceleration of Flash content with AIR for mobile platforms, Adobe recommends that you use renderMode="direct" (that is, Stage3D) rather than renderMode="gpu". Adobe officially supports and recommends the following Stage3D based frameworks: Starling (2D) and Away3D (3D).

Avoid using wmode=transparent or wmode=opaque in HTML embed parameters. These modes can result in decreased performance. They can also result in a small loss in audio-video synchronization in both software and hardware rendering. Furthermore, many platforms do not support GPU rendering when these modes are in effect, significantly impairing performance.

Asynchronous operations are scheduled and divided to avoid rendering issues. Consequently, it is much easier to have a responsive application using asynchronous versions of operations. See Perceived performance versus actual performance for more information.

Unlike bitmaps, rendering vector content requires many calculations, especially for gradients and complex paths that contain many control points. As a designer or developer, make sure that shapes are optimized enough.

Cache assets locally after loading them, instead of loading them from the network each time they're needed

If your application loads assets such as media or data, cache the assets by saving them to the local device. For assets that change infrequently, consider updating the cache at intervals.

Use the StageVideo class to take advantage of hardware acceleration

Use the StageVideo class to take advantage of hardware acceleration to present video.

This approach takes full advantage of the underlying video hardware. The result is a much lower load on the CPU, which translates into higher frame rates on less powerful devices and also less memory usage.

Similar to video decoding, audio decoding requires high CPU cycles and can be optimized by leveraging available hardware on the device.

The AAC format offers better quality and smaller file size than the mp3 format at an equivalent bitrate.

Initialization function such as constructors are interpreted, everything else is JIT.

4
Building an iOS app with Adobe Flex Builder - Performance Issues
7
From SWF to AIR to iOS application
2
Actionscript 3 how to move many object at once without lag
3
Flash AS3 - Adding reflection/mirror to draggable movieclip
0
Open a copy of a scene in AS3
0
Starling framework- only for games?
1
Flash game simple performance tricks
1
Drawing API speed vs embedded graphics
1
performance issues with air app on iphone 4
0
Timers in AS3 can not tick fast enough
See more linked questions