Where are static methods and static variables stored in Java?

Where will these variables be stored in Java, in heap or in stack memory? How are they stored?

Static methods (in fact all methods) as well as static variables are stored in the PermGen section of the heap, since they are part of the reflection data (class related data, not instance related).

Note that only the variables and their technical values (primitives or references) are stored in PermGen space.

If your static variable is a reference to an object that object itself is stored in the normal sections of the heap (young/old generation or survivor space). Those objects (unless they are internal objects like classes etc.) are not stored in PermGen space.

A word on garbage collection:

Do not rely on finalize() as it's not guaranteed to run. It is totally up to the JVM to decide when to run the garbage collector and what to collect, even if an object is eligible for garbage collection.

Of course you can set a static variable to null and thus remove the reference to the object on the heap but that doesn't mean the garbage collector will collect it (even if there are no more references).

Additionally finalize() is run only once, so you have to make sure it doesn't throw exceptions or otherwise prevent the object to be collected. If you halt finalization through some exception, finalize() won't be invoked on the same object a second time.

A final note: how code, runtime data etc. are stored depends on the JVM which is used, i.e. HotSpot might do it differently than JRockit and this might even differ between versions of the same JVM. The above is based on HotSpot for Java 5 and 6 (those are basically the same) since at the time of answering I'd say that most people used those JVMs. Due to major changes in the memory model as of Java 8, the statements above might not be true for Java 8 HotSpot - and I didn't check the changes of Java 7 HotSpot, so I guess the above is still true for that version, but I'm not sure here.

The static variables were stored in the permgen space(also called the method area).

The static variables are stored in the Heap itself.From Java 8 onwards the PermGen Space have been removed and new space named as MetaSpace is introduced which is not the part of Heap any more unlike the previous Permgen Space. Meta-Space is present on the native memory (memory provided by the OS to a particular Application for its own usage) and it now only stores the class meta-data.

The interned strings and static variables are moved into the heap itself.

Class variables(Static variables) are stored as part of the Class object associated with that class. This Class object can only be created by JVM and is stored in permanent generation.

Also some have answered that it is stored in non heap area which is called Method Area. Even this answer is not wrong. It is just a debatable topic whether Permgen Area is a part of heap or not. Obviously perceptions differ from person to person. In my opinion we provide heap space and permgen space differently in JVM arguments. So it is a good assumption to treat them differently.

Another way to see it

Memory pools are created by JVM memory managers during runtime. Memory pool may belong to either heap or non-heap memory.A run time constant pool is a per-class or per-interface run time representation of the constant_pool table in a class file. Each runtime constant pool is allocated from the Java virtual machine’s method area and Static Variables are stored in this Method Area. Also this non-heap is nothing but perm gen area.Actually Method area is part of perm gen.(Reference) 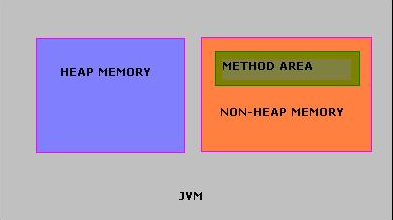 This is a question with a simple answer and a long-winded answer.

The simple answer is the heap. Classes and all of the data applying to classes (not instance data) is stored in the Permanent Generation section of the heap.

The long answer is already on stack overflow:

There is a thorough description of memory and garbage collection in the JVM as well as an answer that talks more concisely about it.

It is stored in the heap referenced by the class definition. If you think about it, it has nothing to do with stack because there is no scope.

In addition to the Thomas's answer , static variable are stored in non heap area which is called Method Area.

As static variables are class level variables, they will store " permanent generation " of heap memory. Please look into this for more details of JVM. Hoping this will be helpful

static variables are stored in the heap

=>2. Static Keyword we will used with variable which going to same for particular class throughout for all objects, e.g in selenium : we decalre webDriver as static=> so we do not need to create webdriver again and again for every test case= Static Webdriver driver(but parallel execution it will cause problem but thats another case); then, Real world scenario=>If India is class then, flag, money would be same every indian so we might take as static. Anatoher example: utility method we always declare as static b'cos it will be used in different test cases. Static stored in CMA( PreGen space)=PreGen (Fixed memory)changed to Metaspace after Java8 as now its growing dynamically

When we create a static variable or method it is stored in the special area on heap: PermGen(Permanent Generation), where it lays down with all the data applying to classes(non-instance data). Starting from Java 8 the PermGen became - Metaspace. The difference is that Metaspace is auto-growing space, while PermGen has a fixed Max size, and this space is shared among all of the instances. Plus the Metaspace is a part of a Native Memory and not JVM Memory.

You can look into this for more details.

Not the answer you're looking for? Browse other questions tagged java jvm or ask your own question.

3
Where are static variables stored in java?
0
Is static memory out of the Java heap?
3
Memory area for Static methods in java
2
Where will the object be created in java
0
Where does the Static members reside in memory,is it permanent generation?
1880
Difference between static class and singleton pattern?
331
Java heap terminology: young, old and permanent generations?
234
PermGen elimination in JDK 8
86
Large difference in speed of equivalent static and non static methods
121
static allocation in java - heap, stack and permanent generation
See more linked questions

4002
What are the differences between a HashMap and a Hashtable in Java?
1886
Java inner class and static nested class
1364
How to round a number to n decimal places in Java
3375
What is the difference between public, protected, package-private and private in Java?
1535
Fastest way to determine if an integer's square root is an integer
529
Why can't I define a static method in a Java interface?
2251
How do I declare and initialize an array in Java?
1194
How do servlets work? Instantiation, sessions, shared variables and multithreading
670
Why are static variables considered evil?
1212
What are the -Xms and -Xmx parameters when starting JVM?