I'm getting started with Jekyll static site generator and I would like to use Live Reload with it. I know Jekyll has a generator and server commands, and Live Reload can run various compilers and custom commands. How do I configure these to work together?

LiveReload is built into Jekyll 3.7+.

UPDATE: As pointed out in other answers, LiveReload is built into Jekyll 3.7+.

The simplest approach I've found that works is to use two terminal windows: One for jekyll serve --watch and one for guard.

I tried the guard-jekyll-plus approach suggested by Nobu but I had a bunch of errors.

As shumushin pointed out, Jekyll can handle the automatic rebuilding process, you simply launch it using jekyll serve --watch

Now to get LiveReload working run guard with guard-livereload in a second terminal window. This is basically the same as Jan Segre's answer, but without guard-jekyll.

Note: You still need to include the livereload script in your index.html page; it is the "glue" that binds guard-livereload and the browser together.

There's guard-livereload which you can use with guard-jekyll and centralize the watching process with guard, an example would be (I haven't tested it):

Add this to your Guardfile:

You can adapt the above to suit better your project, and you probably already know you have to include the livereload script on your page:

Oh, and to start the whole watching mess:

UPDATE: this no longer works with the latest version of Jekyll

This post explains a cleaner way - Setting Up LiveReload With Jekyll

I wrote a Jekyll plugin called Hawkins that incorporates LiveReload into the Jekyll watch process. It works with Jekyll 3.1 and up.

to your Gemfile (and then a bundle install). From there you can run jekyll liveserve. Hawkins will modify the head sections of your pages to include the necessary components for LiveReload, and when Jekyll detects a page change, Hawkins will push a message to your browser via WebSockets. Please note that you will need a browser that supports WebSockets. For very fast reloads, you can use Jekyll's new --incremental option that will only regenerate the changed pages.

Start by running jekyll normally in your site folder:

By default Jekyll generates a folder called _site inside it (your/site/folder/_site).

This command will open your website in the browser and uses jekyll built-in livereload server.

You need a latest jekyll version.

It uses Grunt with the grunt-contrib-watch plugin instead of Jekyll's serve command - works well for me. Hope it works for you as well.

You can use just jekyll serve -w, an option I prefer as I am lazy.

For Live Reload, Remove Jekyll Admin from Gemfile in the root directory of your project and it works like charm.

If you're running it frequently, the Repla macOS app makes it easy to startup Jekyll so it automatically refreshes. After Repla is installed, you run it from the Jekyll blog's root directory and pass it the jekyll serve command. For example:

Repla will be configured to refresh each time ...done is printed in the console, which Jekyll prints when it finishes compiling your site.

Repla runs the Jekyll server process in a split below a browser split showing your site: 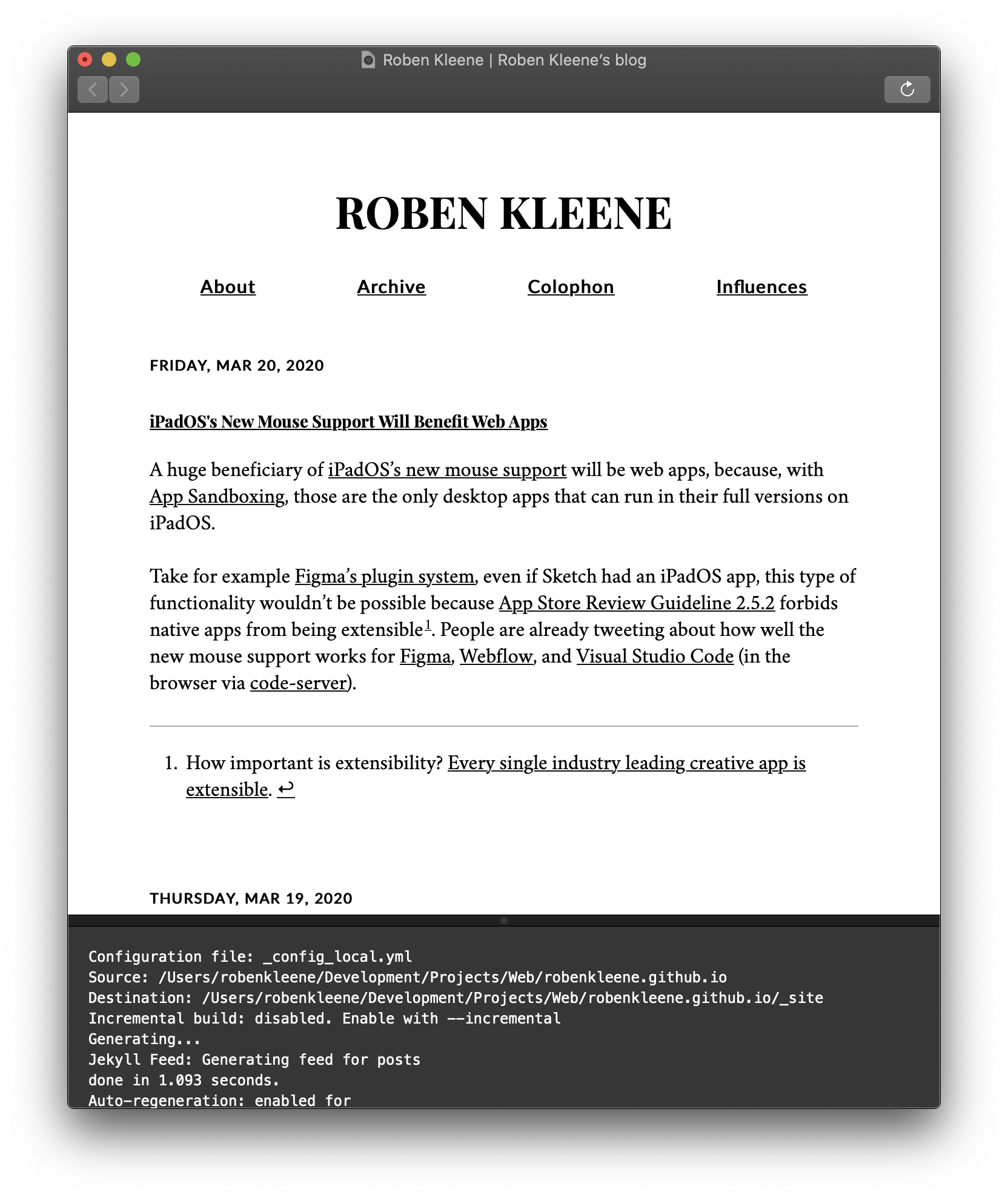 After Jekyll is running in Repla, you can also save the configuration to a file with ⌘S, shut it down by closing the window, and run it again just by double-clicking the file. In other words, you can start your Jekyll blog again next time just by opening the file, without involving the terminal at all.

Disclosure: I maintain the Repla app.