How can I make Notepad to save text in UTF-8 without the BOM?

I have a CSV file with special accents and save it in Notepad by selecting UTF-8 encoding. When I read the file using Java, it reads the BOM characters too.

So I want to save this file in UTF-8 format without appending a BOM initially in Notepad.

Otherwise, is there a built-in class in Java that eliminates the BOM characters that present at beginning, when reading the contents in a file?

I just learned from this Stack Overflow post, as @martin-geisler points out, that you can save files without the BOM in Windows Notepad, by selecting ANSI as the encoding.

I'm assuming that for more advanced uses this won't work because the resulting file is probably not the end encoding wished, but actually ANSI; but I tested and confirmed this works to save a very small .php script without BOM using only Notepad.

I learned the long, hard way that Windows' Notepad is not a true editor, although I'd like to point out for others that, despite this, it is misleadingly called up when you type "editor" on newer Windows machines, at least on one of mine.

I am currently using Emacs and other editors to solve this problem.

Use Notepad++ instead. See my personal blog post on it. From within Notepad++, choose the "Encoding" menu, then "Encode in UTF-8 without BOM".

Notepad on Windows 10 version 1903 (May 2019 update) and later versions supports saving to UTF-8 without a BOM. In fact, UTF-8 is the default file format now. 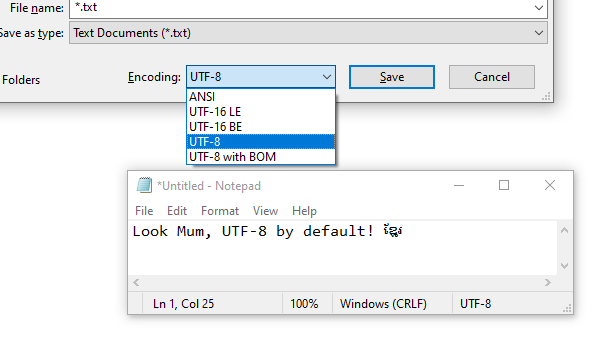 The answer is: Not at all. Notepad can't do that.

In Java you can just skip the first byte in your InputStream and be done.

You might want to try out Notepad2 or Notepad++. Those Notepad replacements have the option for you to choose whether to output BOM.

As for a Java solution, as far as I know, Java does not understand the standard UTF-8. I googled and found Java's UTF-8 and Unicode writing is broken - Use this fix that might be the solution.

We're using the utility BOMStripperInputStream.java to strip the BOM from our input if present.

2
delete special characters preceding shebang (M-oM-;M-?#!/bin/bash)
-1
How can I use C++ to eliminate the BOM in a notepad .txt file?
1
.ssh/config: line 1: Bad configuration option: \357\273\277host
291
standard_init_linux.go:178: exec user process caused "exec format error"
166
How do I remove ï»¿ from the beginning of a file?
74
Return a PHP page as an image
6
Cannot send session cache limiter - headers already sent - CodeIgniter (Session.php)
2
Why is the first character of the first line of a file in windows a 0?
2
How can I get ride of the white space at the top of my website?
0
Store text from file in character array using fread()
See more linked questions

19
What is "ANSI as UTF-8" and how can I make fputcsv() generate UTF-8 w/BOM?
973
What's the difference between UTF-8 and UTF-8 with BOM?
214
How can I output a UTF-8 CSV in PHP that Excel will read properly?
104
How to write UTF-8 in a CSV file
1
Jasperreport CSV UTF-8 without BOM instead of UTF-8
3
Write a text file encoded in UTF-8 with a BOM through java.nio
2
Powershell XMLDocument save as UTF-8 without BOM
0
How can I return a file using spring without changing the encoding, or just set up UTF-8-BOM encoding