I have two tables, table1 is the parent table with a column ID and table2 with a column IDFromTable1 (not the actual name) when I put a FK on IDFromTable1 to ID in table1 I get the error Foreign key constraint is incorrectly formed error. I would like to delete table 2 record if table1 record gets deleted. Thanks for any help

Let me know if any other information is needed. I am new to mysql

I ran into this same problem with HeidiSQL. The error you receive is very cryptic. My problem ended up being that the foreign key column and the referencing column were not of the same type or length.

I had the same problem when the parent table was created using MyISAM engine. It's a silly mistake, which I fixed with:

make sure columns are identical(of same type) and if reference column is not primary_key, make sure it is INDEXED.

Syntax for defining foreign keys is very forgiving, but for anyone else tripping up on this, the fact that foreign keys must be "of the same type" applies even to collation, not just data type and length and bit signing.

Not that you'd mix collation in your model (would you?) but if you do, be sure your primary and foreign key fields are of the same collation type in phpmyadmin or Heidi SQL or whatever you use.

Hope this saves you the four hours of trial and error it cost me.

mysql error texts doesn't help so much, in my case, the column had "not null" constraint, so the "on delete set null" was not allowed

I had same problem, but solved it.

Just make sure that column 'ID' in 'table1' has UNIQUE index!

And of course the type, length of columns 'ID' and 'IDFromTable1' in these two tables has to be same. But you already know about this.

This error might be as well the case if you have a foreign key with VARCHAR(..) and the charset of the referenced table is different from the table referencing it.

if everything is ok, just add ->unsigned(); at the end of foregin key.

if it does not work, check the datatype of both fields. they must be the same.

One more probable cause for the display of this error. The order in which I was creating tables was wrong. I was trying to reference a key from a table that was not yet created.

I had the same issue, both columns were INT(11) NOT NULL but I wan't able to create the foreign key. I had to disable foreign keys checks to run it successfully :

Check the tables engine, both tables have to be the same engine, that helped me so much.

(Last Resent) Even if the field name and data type is the same but the collation is not the same, it will also result to that problem.

Try Changing it into

Although the other answers are quite helpful, just wanted to share my experience as well.

I faced the issue when I had deleted a table whose id was already being referenced as foreign key in other tables (with data) and tried to recreate/import the table with some additional columns.

The query for recreation (generated in phpMyAdmin) looked like the following:

As you may notice, the PRIMARY KEY index was set after the creation (and insertion of data) which was causing the problem.

The solution was to add the PRIMARY KEY index on table definition query for the id which was being referenced as foreign key, while also removing it from the ALTER TABLE part where indexes were being set:

I had the same problems.

The issue is the reference column is not a primary key.

Make it a primary key and problem is solved.

I lost for hours for that!

PK in one table was utf8 in other was utf8_unicode_ci!

I had the same issue with Symfony 2.8.

I didn't get it at first, because there were no similar problems with int length of foreign keys etc.

Finally I had to do the following in the project folder. (A server restart didn't help!)

i solved this problem, changing the type of characters of the table. the creation have latin1 and the correct is utf8.

I had issues using Alter table to add a foreign key between two tables and the thing that helped me was making sure each column that I was trying to add a foreign key relationship to was indexed. To do this in PHP myAdmin: Go to the table and click on the structure tab. Click the index option to index the desired column as shown in screenshot:

Once I indexed both columns I was trying to reference with my foreign keys, I was able to successfully use the alter table and create the foreign key relationship. You will see that the columns are indexed like in the below screenshot:

notice how zip_code shows up in both tables.

You need check that both be same in all its properties, inclusive in "Collation"

I was using HeidiSQL and to solve this problem I had to create an index in the referenced table with all the columns being referenced.

I ran into the same issue just now. In my case, all I had to do is to make sure that the table I am referencing in the foreign key must be created prior to the current table (earlier in the code). So if you are referencing a variable (x*5) the system should know what x is (x must be declared in earlier lines of code). This resolved my issue, hope it'll help someone else.

My case was that I had a typo on the referred column:

The error message is quite cryptic and I've tried everything - verifying the types of the columns, collations, engines, etc.

It took me awhile to note the typo and after fixing it all worked fine:

This problem also occur in Laravel when you have the foreign key table table1 migration after the migration in which you reference it table2.

You have to preserve the order of the migration in order to foreign key feature to work properly.

I had the same issue with Laravel 5.1 migration Schema Builder with MariaDB 10.1.

The issue was that I had typed unigned instead of unsigned(the s letter was missing) while setting the column.

After fixing the typo error was fixed for me.

Even i ran into the same issue with mysql and liquibase. So this is what the problem is: The table from which you want to reference a column of other table is different either in case of datatype or in terms of size of the datatype.

Check that you've specified name of the table in the proper case (if table names are case-sensitive in your database). In my case I had to change

note the customer changed to CUSTOMER.

Or you can use DBDesigner4 which has a graphical interface to create your database and linking them using FK. Right click on your table and select 'Copy Table SQL Create' which creates the code. 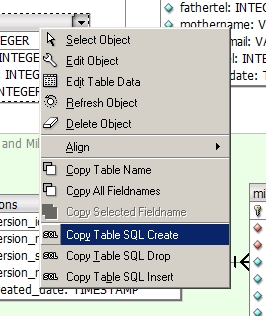 It's an old subject but I discovered something. While building a MySQL workbench, it also gets the relationships of the other table. just leave the pillars you relate to. Clear other automatically added columns. This works for me.

Not the answer you're looking for? Browse other questions tagged mysql sql heidisql or ask your own question.