UIView atop the Keyboard similar to iMessage App

That means I need a UITextView that is docked at the bottom of the screen, and moves up when it becomes firstResponder. - That's pretty easy actually. There's a bazillion ways to do that and two of the most common are of course animating the view upwards or downwards if a notification was received. The other is to do it via the inputAccessoryView. Sadly some of the features the one has, the other doesn't. And they seem to be mutually exclusive.

The big problem is rotation.

I've digged through roughly at least seven different github projects, all of them re-implementing the same functionality/behavior, that I'm trying to achieve, but literally all of them failing miserably.

HPGrowingTextView for instance, which the official Facebook/FacebookMessenger/(and possibly WhatsApp) Apps makes use of, is one big piece of junk-code. Take your iDevice, open the Facebook App, go the the Chat, pop the keyboard and rotate your device. If you pay attention you'll notice the input-bar jumping slightly and leaving some blank space between the keyboard's frame and its own. Then take a look at Apples implementation in iMessage when the keyboard is shown. It's perfect.

Other than that the contentOffset and EdgeInset-hacking that the HPGrowingTextView library makes use of gives me nightmares.

So I wanted to do it myself and start from scratch.

Right now I've got a very slick, elegant and hack-less implementation of a growing UITextView, but one part is missing.

When I simply adjust the frames to their respective new positions in the willRotateToInterfaceOrientation:duration: method, everything ends up working perfectly BUT I have the same problem that HPGrowingTextView(see Facebook App) has. A litte bit of space between the inputview and the keyboard while the rotation takes place.

I found out that when rotating the device to landscape, the portrait keyboard which is currently shown does not "morph" but rather disappears (sends the 'willHide' notification) and a landscape version reappears (sending the 'willShow' notification). The transition is a very subtle fade and possibly some resizing.

Sadly I have yet to come up with an idea how to have the inputAccessoryView dock to the bottom of the screen and NOT disappear/move out of it alongside the keyboard...

What I don't want are hack-y solutions like,..."lowering the frame slightly in the toInterfaceOrientation's CoordinateSystem and then moving it back up when the didRotateFrom... was called."

I know of one other app that has managed to implement such behavior and it's the "Kik Messenger".

Does anyone have an idea, advice or a link that I haven't seen yet covering that topic?

Note: Once this problem is solved I will open source the project for everyone to profit because almost every implementation I was able to find over the course of the past few days, is a mess.

I recently ran into the same problem, and had to build out a custom solution as I wasn't entirely happy with the available 3rd party libraries. I've split out this implementation into it's own GitHub project:

From some simple testing on iOS 6.1 7 & 8 simulators the rotations seem to properly follow the keyboard. The view will also grow with text and resize automatically on rotation.

You can use a very basic init function like so to create it with screen width and default height e.g.:

There are several other initializers that are also available to allow you to customize the frame, keyboard offset and textview max height. See readme for more!

I have been successful at solving the problem in quite an elegant manner (I think,...).

The code will be released on Github next week and linked to in this answer.

How it's done: I made the rotation work by choosing the inputAccessoryView-way of doing it.

Then I remembered some of the stuff I did in my other attempt (animating the MessageInputView's frames around the screen whenever a keyboard notification arrived).

I added my MessageInputView as a subview to my ChatView (at the very bottom). Whenever it is activated and the willShow: methods is called by a keyboard notification, I manually animate the MessageInputView's frame to it's designated position up top. When the animation finishes and the completion block executes I remove the subview from the ChatView and add it to the keyboardAccessoryView. This causes another notification to be fired off because the keyboard is re-loaded EVERY time the inputAccessoryView's frame/bounds are changed!. You need to be aware of that and handle it appropriately!

When the keyboard is about to dismissed, I convert my MessageInputView's frame to my ChatView's coordinate system and add it as a subview. Thus it is removed from my keyboardAccessoryView. I then resize the keyboardAccessoryView's frame back to CGRect(0,0,0,0) because otherwise the UIViewAnimationDuration will not match! Then I allow the keyboard to be dismissed and I have my MessageInputView follow it from above and eventually dock at the bottom of the screen.

This is quite a lot of work for very little gain though.

PS: If someone figures out an easier way to do it (perfectly) let me know.

Here's a UITextView subclass that is working properly on iOS 9.3.1 and 8.3.1. It takes care of growing and shrinking with limits, while keeping the caret always in the right place and animating smoothly.

Sticking the view over the keyboard is trivial, with many solutions to be found easily, so it's not covered...

I could not find any made-solutions that were production ready so I ended up working on this from scratch. I had to work out a lot of little problems along the way.

Code comments should give you an idea of what's going on.

I have shared this on my Github, Contributions greatly appreciated.

(after max height element becomes scrollable. Forgot to drag the demo, but this is working as expected as well... )

How I fix this problem for me:

Another way is to create view programmatically and return as inputAccessoryView.

Recently I've wrote a blog post about this exact problem you've described and how to solve it with a short and elegant way by using keyboard notifications but without using the inputAccessoryView. And although this question is pretty old this topic is still relevant so here is the link to the post: Synchronizing rotation animation between the keyboard and the attached view

If you don't want to dive into the long explanation described in the blog post here is a short description with a code example: 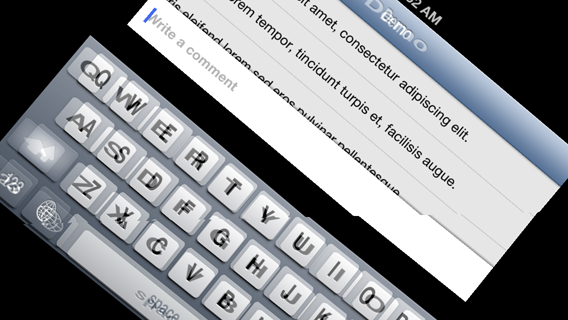 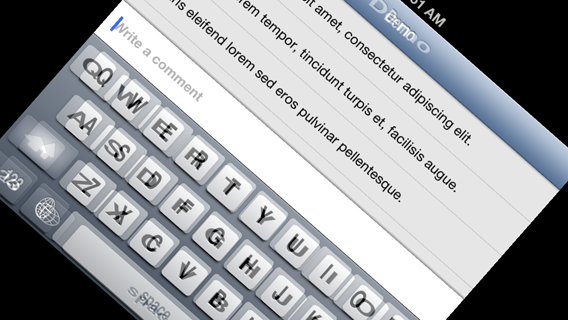 Not the answer you're looking for? Browse other questions tagged ios uitextview uikeyboard or ask your own question.

31
Dismiss keyboard with swipe gesture (as in Message app)
23
Keyboard “WillShow” and “WillHide” vs. Rotation
14
Dynamic expand UITextView on ios 7
21
moving a bar with UIScrollViewKeyboardDismissModeInteractive
1
UITextView as inputAccessoryView like iMessage
1
Auto Layout: Create constraint between two views in separate windows

981
How to change the name of an iOS app?
1684
How can I make a UITextField move up when the keyboard is present - on starting to edit?
572
Giving UIView rounded corners
25
Has anyone found a good way of using the new iOS5 keyboard events?
48
InputAccessoryView docked at bottom
393
Close iOS Keyboard by touching anywhere using Swift
0
iOS Keyboard is tiny after rotation to landscape
0
Get keyboard height of current iOS device in the /other/ orientation and whilst the keyboard is hidden