I have been looking at jobs. Most of the companies require RoR or Django experience. I don't know any of the languages. The number of organizations working with RoR is greater than Django. But I prefer django because of python.

What do you coders/recruiter suggest me to know?

My best answer is for you to learn both.

Consider this your end goal, and instead consider your question as, "Which one should I learn first?"

I recommend that you start with Django, especially if you have Python experience. Django's approach, like that of Python itself, is more condusive to learning. Once you've gotten your feet wet, learn Ruby on Rails, because that's the framework that will net you easier cash when you get out into the modern Web 2.0 workforce.

Once you're thoroughly familiar with Ruby on Rails and have been working for a bit, continue learning Django. Refamiliarize yourself with the basics, then start to learn some of the more advanced stuff. Django's inner guts are supposedly easier to dissect than that of Rails. If you ever find yourself faced with a job opening with a surprisingly novel and challenging web platform to implement, you'll find your Django knowledge quite handy.

Verdict: Django first (do the tutorial), then Rails, then Django again

I'd suggest you to do some research regarding technologies trends and professionals demand, you can do this by using Google tools, such as Google Trends 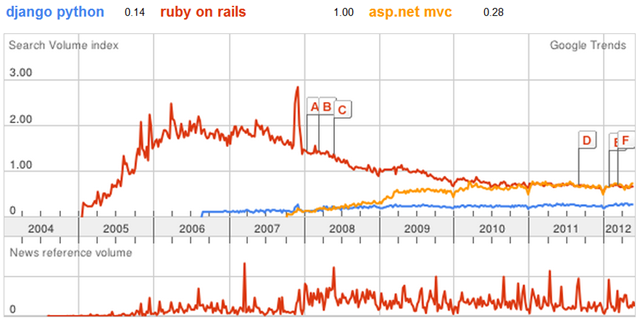 If you're more familiar with Python, then you should do Django. Google App Engine is a big user of Django, and you can use that to "sharpen your saw" in Django skills, for a cost-free investment.

Look for a company, where the people (without ties) have fun working there and speak compassionate about there work. This matters far more, than the technology they're working with.

If you are low on time, and have to choose one, just choose the one, for which you know how to program. If you know python, learn django, if you know ruby, learn rails. Both have excellent tutorials, and reference materials, RoR rules in screencasts, django rules documentation and tutorials. If you have a lot of time on hand, say 3-4 months, then learn both. What's wrong with that?

try ruby...I love ruby over python then I prefer rails over django...but if you try ruby and don't like it your best option would be django...

I think it depends on how much convention you are used to. Coming from MVC4 to Django I like alot of things, but find I am writing more code where django calls for configuration vs convention. I have found that there are alot of generic methods that I am finding that reduce this, so it might be a learning curve issue for me.

0
can users who have used both Django and Ruby on Rails give a little comparison of using them?

1241
How to call shell commands from Ruby
736
How to "pretty" format JSON output in Ruby on Rails
1199
How to understand nil vs. empty vs. blank in Ruby
1043
Understanding the Rails Authenticity Token
2265
How to write a switch statement in Ruby
1494
How to check if a value exists in an array in Ruby
1554
How can I rename a database column in a Ruby on Rails migration?
1118
How do I get the current absolute URL in Ruby on Rails?
1131
What is attr_accessor in Ruby?
1026
Ruby: How to install a specific version of a ruby gem?