AS3 MOUSE_OVER problems due to movieclip overlap

I am working on something that has a lot of different buttons on the screen. The buttons need to be made using movieclips, not actual "buttons".

I have created a glow effect around the button on mouseover. This works great, except that the glow effect creates a hitbox for the button about twice the width and height of the actual button. I did some research, and ended up making a symbol inside the button symbol that contains just the hit region I want to trigger the button. This works excellently for triggering the button. Now, when I mouse over the buttons, they only light up when I hit the actual button graphic itself, not the box around it from the glow animation. However, the problem is that for some reason the box from the animation is still blocking mouseover from being detected on nearby buttons (if the box overlaps them.)

This might sound confusing, so here is a picture: 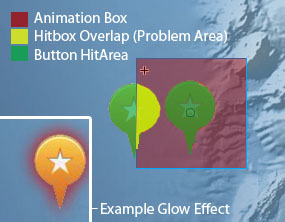 NOTE: Both the hit-area and the animation are already contained within their own separate symbols inside the button symbol. Setting the animation symbol's mouseEnabled and mouseChildren to false does not seem to to do the trick like I had hoped it would (based on researching this problem.)

Here is the code for the button's class:

Can anyone explain to me how to get the animation's box (the red box), to not block the buttons underneath it? (Effectively make the red box un-detectable by mouse events, so clicks, mouseover, etc. go right through it to the items underneath.)

Try setting mouseEnabled = false on the container DisplayObject (the one with the glow) that contains the hit-area for your button. You will still want to leave mouseChildren = true. This way, the glow should no longer block mouse events.

The useful thing about mouseEnabled and mouseChildren is that you can choose to disable just the container, or just a containers' children.

This is a good read:

Not the answer you're looking for? Browse other questions tagged flash actionscript-3 flash-cs4 or ask your own question.

0
AS3 - Tile image/movieclip along a line
0
Forward MouseEvent in transparent bitmap to underlying MovieClip
1
MovieClip in Flash MOUSE_OVER Issues
0
Movieclip contents activating mouse event
0
AS3. MovieClip over other movieclip instead of mouse_over.
2
How to link functionality from Class file to DocumentClass and to Movieclips in AS3?
0
AS3 / TextField on movieClip
0
Problems disabling movieclip button flash/as3
2
How do you handle mouseover events with overlapping TextFields?
0
AS3 Center a MovieClip