Tmux borders displayed as x q instead of lines?

I'm having trouble getting tmux to display lines for borders. They are being created with x and q. It's a debian squeeze server and the locale is set to en_US UTF8. I also tried adding

lines to .tmux.conf. Nothing seems to work. I'm not sure if it's a locale issue or not. It displays correctly on other servers, but not the debian. I appreciate any tips you could offer! Thanks...

There is some mismatch between your terminal emulator and the terminfo database entry being used by tmux (the one named by the TERM environment variable when you start/attach to a tmux server).

Per the VT100 User Guide, Table 3-9: Special Graphics Characters, when the “special graphics set” is selected, x is used to draw the “Vertical bar” and q is used to draw “Horizontal line - Scan 5”.

Under terminfo, the VT100 special graphics characters are available as a part of the Alternate Character Set functionality; see the “Line Graphics” section of the terminfo(5) man page.

Probably (on your Debian server) the effective terminfo database entry indicates that ACS is available, but your terminal emulator is not actually responding to the specified control sequences.

The tmux CHANGES file indicates that some terminal emulators (e.g. Putty) do not respect the ACS control sequences when they are in UTF-8 mode. Thus, tmux 1.4 has a change that makes it always use UTF-8 characters instead of ACS sequences when the attaching client specifies that it can handle UTF-8 (i.e. when attaching, -u was given or UTF-8 is present in LC_ALL, LC_CTYPE or LANG; the utf8 window option is about what tmux should expect from the programs it runs, not what it can send to the attached client).

Debian “squeeze” only includes tmux 1.3, so your tmux probably does not have the “prefer UTF-8 line drawing” feature (unless it pulls from a backports source).

If you can not fix your terminal emulator nor upgrade to at least tmux 1.4, then you might be able to use tmux’s terminal-overrides option to unset the ACS-related capabilities so that tmux will fall back to ASCII line drawing. In your .tmux.conf (on the Debian system):

I had the same problem with PuTTY and Windows 8 when connecting to tmux running on a Debian Squeeze machine. Even when setting the charset to UTF-8 in PuTTY (in the settings under Window > Translation > Remote character set) I didn't get the correct line drawing.

Setting the Remote character set to "Use font encoding" did the trick for me.

Try setting the character set to "UTF-8" and "Use Unicode line drawing code points" under Window -> Translation in your putty settings.

I had the same problem with Putty when launching tmux on Linux 12.04 machine. Even setting the charset to UTF-8 in PuTTY (in the settings under Window > Translation > Remote character set) didn't solve the problem.

Launching tmux with -u option did the trick (tmux -u)

If you have Putty 0.73 or higher open settings, expand Window category, then select Translation. Check 'Enable VT100 line drawing even in UTF-8 mode': 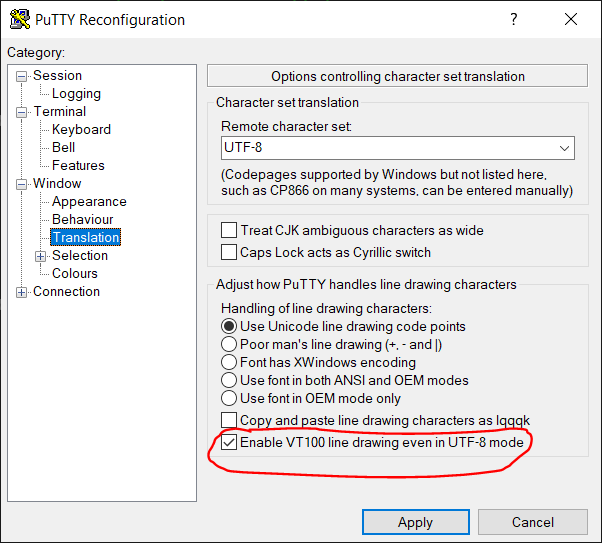 I ran thru the gamut of suggestions including:

Above did not work. Dialog displays showed qqqq... and xxxx with various corner characters.

Changing all dialog calls to include --ascii-lines was an option but it would involve a lot of script changes.

Best recommendation was to change the Remote Character Set to Use font encoding.

Left all other PuTTY settings default.

I changed the setting in Putty for terminal to Latin-1 and that seemed to fix the problem.

If you are using KiTTY there is a check box under Windows -> Translation tab, that is called "Allow ACS line drawing in UTF". It needs to be checked: 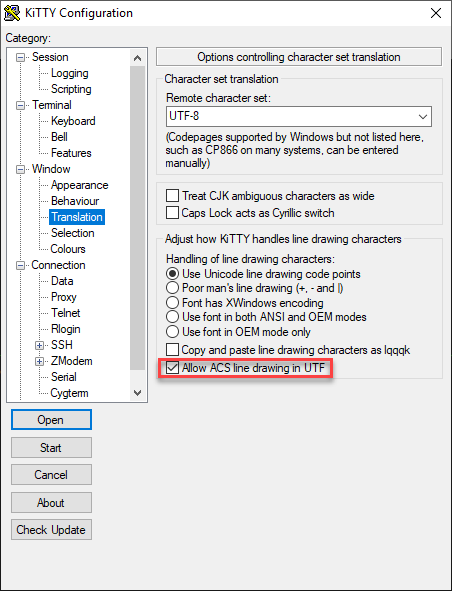 For me the issue was I forgot to make a locale.conf file when I setup this Arch Linux box. Below line fixed the issue, substitute your own language. A reboot was not required for me.

It seems the font choice is a confusing factor here, to wit:

Not the answer you're looking for? Browse other questions tagged utf-8 debian tmux or ask your own question.

35
Tmux borders are drawn with dashed lines; how can I change them to continuous lines?
21
Correct Putty configuration for Ubuntu 9.04
9
tmux in putty displays border as 'qqqqq' or 'xxxx'
9
Vertical tmux borders dashed only when using iTerm
6
NCURSES border printing as q, x, when using UTF-8 and PuTTY
10
gdb --tui is unable to display borders with proper lines when PuTTY terminal is set to use UTF-8
1
Pipe does not get printed in suckless terminal

233
Keep the window's name fixed in tmux
242
How to terminate a window in tmux?
426
Is there any way to redraw tmux window when switching smaller monitor to bigger one?
271
tmux set -g mouse-mode on doesn't work
0
tmux-powerline status bar works in terminal not in iterm2
223
How to send a command to all panes in tmux?
390
How to increase scrollback buffer size in tmux?
232
How do I disconnect all other users in tmux?
1
tmux colour scheme changes when opening Vim?
3
Stuck in overwrite mode in tmux