How to create the branch from specific commit in different branch

I have made several commits in the master branch and then merged them to dev branch.

I want to create a branch from a specific commit in dev branch, which was first committed in master branch.

I used the commands:

PS: I made an example in github here https://github.com/RolandXu/test_for_branch

I used the commands:

If you are using this form of the branch command (with start point), it does not matter where your HEAD is.

What you are doing:

If you want to start a new branch at the location you have just checked out, you can either run branch with no start point:

or as other have answered, branch and checkout there in one operation:

In other words: if you merge branch A and branch B into branch C, then create a new branch on a commit of A, you won't get the changes introduced in B.

Same here, you had two parallel branches master and dev, which you merged in dev. Branching out from a commit of master (older than the merge) won't provide you with the changes of dev.

If you have not published your feature branches, you can also rebase them on the updated master: git rebase master featureA. Be prepared to solve possible conflicts.

If you want a workflow where you can work on feature branches free of merge commits and still integrate with newer changes in master, I recommend the following:

Do not commit into dev directly, use it only for merging other branches.

For example, if you are working on feature A and B:

Merge branches into a dev branch to check if they work well with the new master:

When it is time to integrate the new features, merge the feature branches (not dev!) into master.

You have the arguments in the wrong order:

and for that, it doesn't matter what branch is checked out; it'll do what you say. (If you omit the commit argument, it defaults to creating a branch at the same place as the current one.)

If you want to check out the new branch as you create it:

with the same behavior if you omit the commit argument.

You can do this locally as everyone mentioned using

Alternatively, you can do this in github itself, follow the steps:

2- on the commit you want to branch from, click on <> to browse the repository at this point in the history. 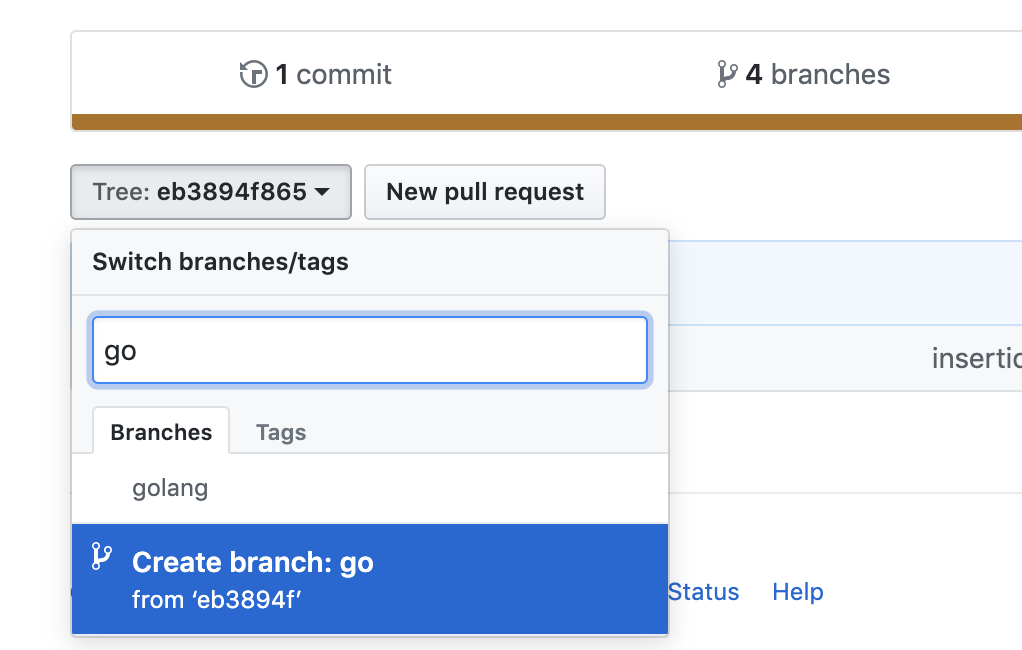 Now you can fetch the changes from that branch locally and continue from there.

The commit should only exist once in your tree, not in two separate branches.

This allows you to check out that specific commit and name it what you will.

You have to do:

(you were interchanging the branch name and commit)

Or you can do:

If in place of you use branch name, you get a branch out of tip of the branch.

Not the answer you're looking for? Browse other questions tagged git git-branch or ask your own question.

1
Move commits from linear history to a separate branch

7532
How to remove local (untracked) files from the current Git working tree
3724
Undoing a git rebase
7656
How to modify existing, unpushed commit messages?
10302
How do I undo 'git add' before commit?
23805
How do I undo the most recent local commits in Git?
5824
Move the most recent commit(s) to a new branch with Git
18857
How do I delete a Git branch locally and remotely?
1903
Make the current Git branch a master branch
2444
What is the best (and safest) way to merge a Git branch into master?
10122
How do I rename a local Git branch?