I have a workspace with a project which links with the static libraries in another project (which is also in the workspace). It's a problem in Kobold2D I haven't been able to resolve, even though I understand the cause, and I suppose it's similar to this question.

The project targets and the static library targets all have the Debug and Release build configurations. All is well.

At the end, when the linker is supposed to bring everything together, it fails:

For forcibly loaded libraries via -force_load $(BUILT_PRODUCTS_DIR)/libSomeLib.a the error is similar but says "file not found". I should note that the library "libbox2d-ios.a" is in the "link binary with libraries" build phase list.

Obviously the problem is that the linker is assuming that the libraries are in the Ad-Hoc-iphoneos folder in the BUILT_PRODUCTS_DIR while they are actually in the Release-iphoneos folder because they have no Ad-Hoc build configuration.

How can I slap the linker in the face and tell him to get the libraries where they are? Preferably I'm looking for a solution that works for both cases, ie libraries added the standard way (link binary with libraries build phase) and libraries that need an additional -force_load to work.

I'm hoping that there's some way to:

I have not found a way to do this, unfortunately. The best workaround I can find is to add new targets rather than new build configurations. So for example in one of my projects I have only Release and Debug configurations, but I have extra targets called "MyProject - app store" and "MyProject - ad hoc". This will only be possible if you have control of the project file, of course.

Having duplicated targets sitting around is annoying in the extreme because you can add files to one target and forget to add them to the others, and you won't know until you try and build it. But it does build, which is a win (with xcode anyhow).

A similar question I asked a while ago: What is the correct way to set build configurations in an ios project using static libraries for creating an archive in xcode 4?

As said in similar question iOS Static Library as a Subproject of a Project That Has Custom Build Configurations?, the fix is to add this line

Here's something that works for me.

Now when you do an Adhoc build, Xcode will put libFoo.a and Bar.app in the Release-iphoneos folder. The linker will be happy and you can use -force_load $(BUILT_PRODUCTS_DIR)/libFoo.a as usual.

Alternatively, you can add the Release-iphoneos folder to the library search paths for the Adhoc build configuration:

But then you'll have to set a different -force_load for each build configuration:

I have a similar problem using CocoaPods and trying to have more than one Adhoc (or Enterprise, or Beta) configurations.

Here is what seems to work (let's say that both projects are lying in the same xcworkspace):

This will copy the lib generated by the subproject Release build (which will happen when mainproject is built) in the Adhoc build directory, so that the linker will find the lib. And we should be good to go! Yeah!

I'm not sure if it's the best way to do it. But it looks clean enough to me for now. :)

Oh, and for Cocoapods, after you duplicate the configuration, if you run pod install right away you will get this yellow warning:

You have to go to the Project, "Info" tab, "Configurations" section, select the new configuration you just created, and set "Pods.release" of all targets to "None" first. After that, you can run pod install safely.

Usually I have an AppStore scheme (mapped to my AppStore config).

One thing that happened to me, was this case sensitive issue that was making Cocoapods to generate a build folder for Pods.build inside Release-iphonesimulator (as a fallback) instead of AppStore-iphonesimulator.

I guess I miss-clicked when I linked the scheme and config and only removing it and re-adding made me understand what went wrong. Check the diff. 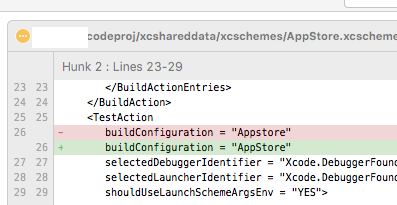 I was using cocoapods 0.38.2, so this was clearly a user mis-configuration and not a Cocoapods issue that was resolved on 0.34

Not the answer you're looking for? Browse other questions tagged xcode4 build linker static-libraries or ask your own question.

17
How can I create static library and can add just .a file on any project in ios
3
iOS Static Library as a Subproject of a Project That Has Custom Build Configurations?
10
Xcode 4 build Static Library dependency with different configuration setting
6
What is the correct way to set build configurations in an ios project using static libraries for creating an archive in xcode 4?
7
Xcode “Embed Frameworks” built under different configuration
2
Library not found when building distribution config in xcode 4
0
ld: library not found for -lSupport-bitcode