How do you run JavaScript script through the Terminal?

For instance, if you were to run a Python script you would type python filename.py or if you wanted to run a C program make filename then ./ filename. How do you do this with .js files?

Another answer would be the NodeJS!

Using terminal you will be able to start it using node command.

Note: If you want to exit just type

You can also run a JavaScript file like this:

If you have MacOS you can get jsc a javascript console by typing on Terminal.app:

On older versions of OS X, the jsc command is located at:

You could also run one of your .js script by adding its name as an argument for jsc, like this:

Notice: I use console.log() during development but jsc needs the debug() function instead.

On Ubuntu you have some nice ECMAScript shells at your disposal. Between them it's worth to mention SpiderMonkey. You can add It by sudo apt-get install spidermonkey

On Windows as other people said you can rely on cscript and wscript directly built on the OS.

I would add also another :) way of thinking to the problem, if you have time and like to learn new things i'd like to mention coffee-script that has its own compiler/console and gives you super-correct Javascript out. You can try it also on your browser (link "try coffeescript").

UPDATE July 2021: You can also install and use the brilliant QuickJS which on OS X could be installed via brew install quickjs. Then an interactive console will be available at your propmt with qjs

You would need a JavaScript engine (such as Mozilla's Rhino) in order to evaluate the script - exactly as you do for Python, though the latter ships with the standard distribution.

If you have Rhino (or alternative) installed and on your path, then running JS can indeed be as simple as

It's worth noting though that while JavaScript is simply a language in its own right, a lot of particular scripts assume that they'll be executing in a browser-like environment - and so try to access global variables such as location.href, and create output by appending DOM objects rather than calling print.

If you've got hold of a script which was written for a web page, you may need to wrap or modify it somewhat to allow it to accept arguments from stdin and write to stdout. (I believe Rhino has a mode to emulate standard browser global vars which helps a lot, though I can't find the docs for this now.)

Use node.js for that, here is example how to install node by using brew on mac:

Then run your program by typing node filename.js, and you can use console.log() for output.

It is crude, but you can open up the Javascript console in Chrome (Ctrl+Shift+J) and paste the text contents of the *.js file and hit Enter.

If you're using MacBook.

Alternatively, if you're just looking to play around with Javascript a nice in browser option is Codecademy's Javascript Lab.

They also have a Python and Ruby IDE.

If you are on a Windows PC, you can use WScript.exe or CScript.exe

Just keep in mind that you are not in a browser environment, so stuff like document.write or anything that relies on the window object will not work, like window.alert. Instead, you can call WScript.Echo to output stuff to the prompt.

I tried researching that too but instead ended up using jsconsole.com by Remy Sharp (he also created jsbin.com). I'm running on Ubuntu 12.10 so I had to create a special icon but if you're on Windows and use Chrome simply go to Tools>Create Application Shortcuts (note this doesn't work very well, or at all in my case, on Ubuntu). This site works very like the Mac jsc console: actually it has some cool features too (like loading libraries/code from a URL) that I guess jsc does not.

You need installed JS engine like Node, then use a shebang line in very first line of your file, like this:

after that you must set executable permission:

This is a "roundabout" solution but you could use ipython 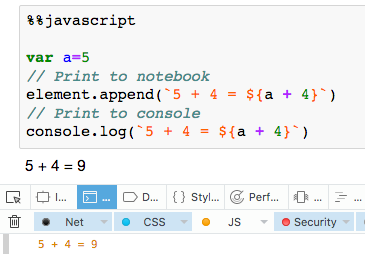 All the answers above are great, I see one thing missing and could be considered for running javascripts(*.js) files, the unrelated brother of javascript the Java.

JDK comes up with two nice tools, could be utilized for executing javascripts. Here are command goes like. Make sure to navigate to JDK\bin.

Its comes up with another commmand tool that goes like this-

I hope this may be helpful to others.

All you have to do to run a js file via bash is type: $ node filename.js

This is similar to in python, when you do: $ python filename.py

You can also use phantomjs Download phantomjs depending on the system (my case is Max OSX) from phantomjs.org .You should put the path to phantomjs installation folder on the top of your javascript file. eg. #!./bin/phantomjs Save your code. Go to the terminal where your javascript is saved and you can run using > phantomjs filename.js

Technically, Node.js isn't proper JavaScript as we know it, since there isn't a Document Object Model (DOM). For instance, JavaScript scripts that run in the browser will not work. At all. The solution would be to run JavaScript with a headless browser. Fortunately there is a project still active: Mozilla Firefox has a headless mode.

Not the answer you're looking for? Browse other questions tagged javascript terminal or ask your own question.

148
Any way to force strict mode in node?
24
rhino vs spidermonkey
1
How to execute javascript on command line without node
1
Running JavaScript on Ubuntu terminal gives no output
1
How to run php file with js code in it on commandline?
0
Accessing functions (prototype extension) inside another function - Javascript
1
Passing a txt file as an argument in JavaScript
0
Issues running haxe application in osx terminal with createjs library

5293
How can I validate an email address in JavaScript?
7625
How do JavaScript closures work?
4514
How do you get a timestamp in JavaScript?
2797
How do I print colored text to the terminal?
5959
How do I include a JavaScript file in another JavaScript file?
8174
What does "use strict" do in JavaScript, and what is the reasoning behind it?
7416
How to check whether a string contains a substring in JavaScript?
4339
Why does Google prepend while(1); to their JSON responses?
3718
Loop through an array in JavaScript
6348
How to return the response from an asynchronous call